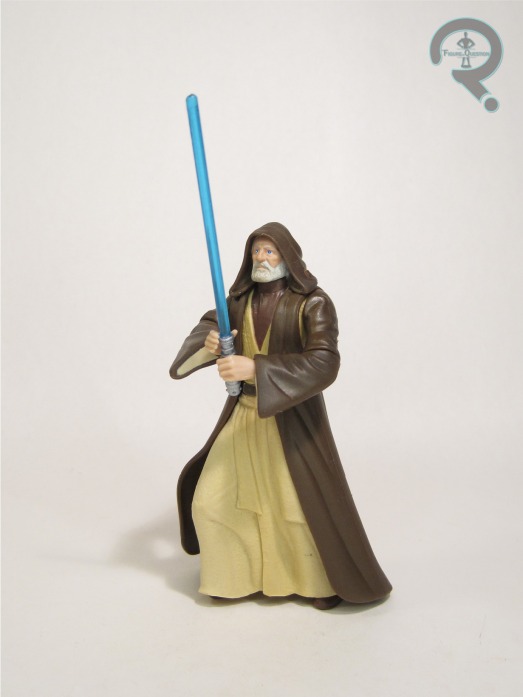 “Legendary among the heroes of the Rebel Alliance, Ben (Obi-Wan) Kenobi is regarded as one of the greatest Jedi Knights ever to have lived. As a young Jedi who had just completed his own training, Obi-Wan made a solemn pledge to train young Anakin Skywalker in the ways of the Force. Anakin became a Jedi but then turned to the dark side and became Darth Vader. Many years later, destiny would have an older and wiser Obi-Wan guiding Anakin’s own son, Luke Skywalker, in the ways of the Force, and ultimately, in turning Vader back to the light side.”

Last week, I took my first dive into the Power of the Force Flashback Photo subset of figures, and rather poked fun at the concept and how far of a reach some of those figures were for the idea.  Well, in their defense, some of them did make at least some bit of sense.  Given that it was to tie-in with the first of the prequels, and there were actually some crossover characters, showing those characters from the original trilogy, and offering the flashback there?  Not the worst idea.  Among the cross over characters was Obi-Wan Kenobi, who I’m taking a look at today. 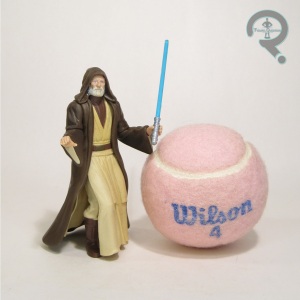 Ben (Obi-Wan) Kenobi, as he is so specifically named on the box, was part of the first set of “Flashback Photo” Power of the Force figures, hitting towards the end of 1998, just as we were getting prepped for the new movie.  He was our fourth Obi-Wan from the line, and only the second to be part of the regular line.  The figure stands 3 3/4 inches tall and he has 10 points of articulation.  This would mark the first real move to improve the articulation on these figures, as Obi-Wan wound up with a whopping three joints in each of his arms.  Sure, they were all cut joints, and sure, the rest of his movement was majorly restricted by the robes, but it certainly was a step up.  Also of note was the fact that this was the first Obi-Wan not to be based on the first PotF figure’s molds, making him generally less oddly bulked up and weird looking.  He’s still a little more bulked up than Sir Alec Guinness actually was in the movie, but it’s not quite as insane.  Preposing is a bit more involved this time, with the figure being designed to directly interact with the “Flashback” Vader figure, in an effort to recreate their duel from A New Hope.  With the extra articulation, there’s a little more variety as to what you can do, though it’s still not a ton.  Honestly, the screen accurate thing wasn’t the worst concept, and it does at least make him a little more unique compared to others in the line.  It’s not a bad looking sculpt, either, and they were really starting to get the hang of making the clothes look fairly natural on the bodies.  The hood in particular doesn’t look too bad, and hoods are usually pretty darn tricky.  The only downside is that the hands have some difficulty holding the lightsaber, which does somewhat hinder his purpose.  In terms of paint work, Obi-Wan is about on par with the rest of the line, so he’s basic, but generally pretty well handled.  All of the important details are there, and they’re pretty cleanly applied.  Obi-Wan is packed with his lightsaber, which is about all he really needs.  Of course, he’s also got the Flashback Photo, which is about as intriguing here as it was with Beru.

All of the Flashback Photo figures passed me by as a kid, just because there wasn’t actually much new coverage there.  This one in particular proved frustrating for me as a kid, because I just wanted a prequel Obi-Wan figure, and I kept finding this one, and he wasn’t really what I wanted.  Admittedly not really the figure’s fault, I suppose.  I wound up getting him this past fall when he was traded into All Time.  He’s not a bad little figure, and is probably this line’s best version of Obi-Wan. 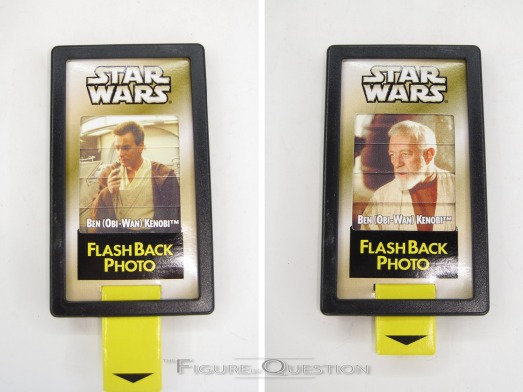