“Firestorm has the ability to alter the atomic structure of all things. He uses this power to fly, cause nuclear blasts, and transform objects into other things.  Firestorm is not invulnerable. He loses all his powers when he switches to his civilian identities. Firestorm is actually TWO people – teenager Robbie Raymond, and Professor Martin Stein. Firestorm was created when their two bodies were atomically fused during an explosion in a nuclear power plant.”

Super Powers‘ fixation on both Super Friends and the Satellite Era of the Justice League line-up made it a good time to be Firestorm, a member of both teams in at least some capacity.  A relatively new character, being introduced only six years prior to the line’s launch, he nevertheless found himself a home in the line, netting him his first, and for a very long time only, action figure, which I’m going to be taking a look at today!

Firestorm was included in the 1985 line-up for Kenner’s Super Powers line, during it’s second year at retail.  He was one of the four Justice Leaguers added in the second year, and was definitely the most eclectic choice of that bunch (though, in a year that included Desaad, Mantis, & Steppenwolf, he was certainly far from the most obscure character included).  The figure stands almost 5 inches tall (thanks to that really tall bit of fire hair) and he has 7 points of articulation.  His movement scheme is pretty much the same one that the entire line sported; it’s not bad for the era, and is certainly a step up from where Kenner tended to be.  Firestorm had a totally unique sculpt (which would have seen some re-use had the planned Power Plus subline launched in 1987 as planned), patterned on Jose Garcia-Lopez’s style guide illustration for the character.  He’s based on his original Raymond/Stein fusion design, which was at this point still the only one he had, so I guess it made sense.  It’s a distinctive look, and one that certainly translates nicely into figure form.  The only slightly awkward part, I guess, is the hair, but honestly even that doesn’t look so bad here.  There’s also a really nice flow on the puffy sleeves, which could look way sillier than they ultimately do.  Firestorm’s paint work continued the line’s trend of being bright, clean, and colorful.  He actually had a little more going on than some of the other figures, and in particular they’ve made the hair look pretty good again, even if the design necessitates it being totally opaque.  Firestorm included no accessories, but he did get the requisite super power action feature.  His is a “Power Action Atomic Punch”; squeeze his legs and he moves his arms back and forth.  Wooooooo.

Firestorm is another very early addition to my Super Powers collection.  I got him for my eighth birthday, as a gift from my parents.  I remember being rather excited, especially since it was literally the only Firestorm available at the time, and would stay that way for a few years.  I was still catching the occasional Super Friends reruns, and that included a few of his later series appearances, so I definitely liked the character.  This would actually remain the only Firestorm in my collection until the DCUC version was released.  He’s a pretty solid figure.  I mean, so’s the rest of the line, for the most part, but I do like this one quite a lot. 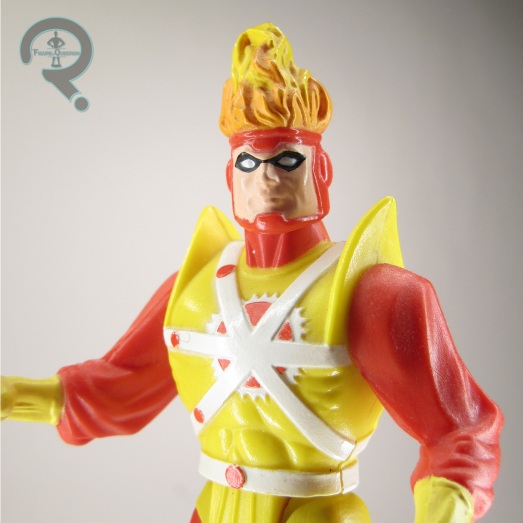