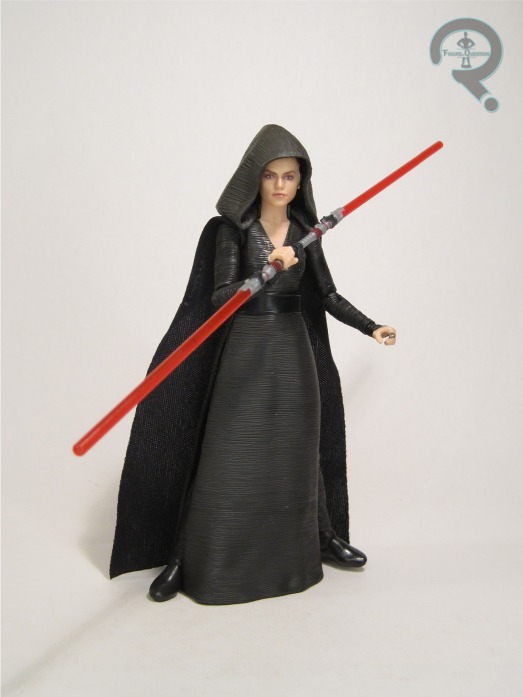 “While searching for the Sith wayfinder, Rey envisions her turn to the dark side. Wielding a double-bladed Lightsaber, her rage and immense power is frightening.”

While I enjoyed the film a lot more than other people, I’m willing to admit that Rise of Skywalker is a film that has a lot of half-formed, unfinished, and unexplored ideas jammed into it.  Though featured in the trailers and taunted as a major turning point, the Dark Side-influenced version of Rey wound up as essentially just an easter egg, with no real plot-bearing, and effectively nothing that wasn’t already in the trailer, apart from the context of it just being a vision, and not a legitimate fall for Rey.  While I wasn’t as married to the dark Rey idea as some people, I’ll admit the concept could have at least gotten some more screen time, even if it were still as a vision of a potential future.  But, hey, it got a figure.  That’s cool, right?

Dark Side Vision Rey is part of Phase IV of Star Wars: The Black Series, and was included in the line’s third assortment, alongside the three Mandalorian-inspired figures I looked at earlier in the week.  She’s figure 01 in the Rise sub-set of the line, which is, so far, made up only of this figure.  Sure, we can get a second Rey, but a proper Rise version of Poe?  That’s just too much to ask for, right?  Totally ridiculous! …Okay, sorry, I’m not bitter or anything.  I promise.  The figure stands just shy of 6 inches tall and she has 28 points of articulation…in theory.  Unfortunately, most of the figure’s leg articulation ends up more or less useless, due to the nature of how the figure’s skirt piece is designed.  For some reason, they opted to go for a more solid rubber construction for that piece, while using a cloth piece for her cape.  Why? Not a clue.  Personally, I’d have probably swapped those two.  But I’m not a toy designer, so maybe there are factors I’m not privy to.  Dark Rey’s sculpt is generally okay, but not really anything amazing.  The head’s got a strong Daisy Ridley likeness, and might be a re-use of the standard Rise version, but it’s hard to tell.  It’s good piece regardless.  The hood that sits on top of it’s not so great.  I mean, I guess the hood itself isn’t awful.  The shaping and the texturing are certainly nice.  However, much like the Rise Kylo, the hood floats above the head, which looks goofy.  It’s not as bad as Kylo, mind you, and changing the posing on her head can help, but generally it would look much better if it sat just a touch lower.  The rest of the sculpt isn’t bad.  Her proportions match with the standard Rey, and the texturing on the robes is consistent with the strong work on the hood.  Rey’s paint isn’t very involved, since it’s mostly just black plastic here.  The face printing does a nice job with the shadows on the eyes, so that’s cool.  The hair line’s not so great on my figure, but it’s at least harder to see that due to the hood.  Dark Rey’s only accessory is at least a good one: she gets the distinctive hinged double-bladed saber from the sequence.  It’s an odd piece, and she never really looks natural holding it, because the whole design is kind of awkward.  However, it’s certainly unique, and it’s about the only thing I can think of that it would make sense to give her, so kudos to Hasbro there.

Rise has been the red-headed stepchild of the franchise when it comes to toys, so I’m always happy to see at least something more coming out of the movie, but I’d be lying a bit if I said I wasn’t disappointed with this being the first thing from the movie to be included in the Phase IV line-up.  It’s made even worse by the total lack of follow-up to her at this point.  Whatever the case, I guess it’s not really this figure’s fault that it’s not a different character, so it’s a little unfair to judge it by those standards.  On it’s own merits, it’s alright.  Not amazing or anything, but it could be worse.  Hopefully, she’ll be joined by some more figures from the movie, so that Rey and Rey aren’t the center piece of the display.

Thanks to my sponsors at All Time Toys for setting me up with this figure for review.  If you’re looking for Black Series, or other toys both old and new, please check out their website and their eBay storefront.