About three weeks ago, Hulu dropped Marvel’s M.O.D.O.K., an animated sitcom starring Patton Oswalt as the titular character, which re-envisions the character as the head of a dysfunctional family, because it’s an adult animation comedy, and we don’t really have another mold to poor those into yet.  Slight jests aside, I binged the show when it dropped and I rather enjoyed it, and all of its deep-reach Marvel in-jokes.  M.O.D.O.K. himself is finally getting into a greater spotlight, after being just on the fringe for several years.  And, no doubt in an effort to tie in with the show, he’s just gotten a Legends update courtesy of Hasbro.  How kind of them.

M.O.D.O.K. is a single one-off release for Marvel Legends.  He’s kinda like a deluxe figure, but even more so.  He’s like a super deluxe.  Or a two-pack that’s secretly just one figure, only it’s not even a secret.  He’s at the two-pack price point is the main thing I’m getting at here.  This is our second M.O.D.O.K. Legends figure, following Toy Biz’s version from way back in their final assortment.  That one was very good for its time, and holds up pretty well, but it’s been 15 years, and that one’s hard to get these days.  This one’s kinda like a Build-A-Figure whose parts are all sold in one box, because you’ve actually got to put him together after taking him out of the box.  When fully assembled with blast and everything, the figure stands 8 1/2 inches tall and he has 25 points of articulation.  M.O.D.O.K.’s articulation is impressive for what he is, which is floating head with arms and legs sticking out of it.  The movement on the limbs has a good range, and there’s even some slight posability to the blast effect base, as well as the control stick on the left side.  The base does lean a little bit to one side on my figure, but not terribly so, and he still stays fairly stable.  M.O.D.O.K.’s sculpt is, predictably, an all-new affair.  It’s quite impressive from a technical standpoint.  There are a lot of clean technical work on the body, and he’s got two different faceplates to swap out, one calm, one expressive, both of which really capture his ugly visage. The only downside is that you pretty much have to fully disassemble his body to swap the faces out, which is a little involved.  Of course, it means they don’t fall out too easily, so that’s a plus.  The paint work on this guy is quite good.  A lot of molded colors, of course, but there’s some really nice, quite subtle accenting on the gold sections, as well as some very nice work on the faces, giving them a nice lifelike quality.  In addition to the swappable face plates, M.O.D.O.K. also features two sets of hands, one in open gesture, and the other a fist/gripping combo.  It’s not a ton, but he’s a fairly sizable figure on his own, and his assembly literally fills the entirety of the box he comes in.

The Toy Biz M.O.D.O.K. was from the era when my brother and I were splitting the BaFs depending on who wanted them more, so he wound up with that one.  At the time I didn’t really mind, because I was so-so on M.O.D.O.K. at the time.  Over the years, I’ve grown to appreciate the character a little more, but that old BaF was kinda pricey, so I just didn’t worry about it.  This guy offered a much easier acquisition, which ultimately worked out far better for me.  He’s really just an improvement on the original in every way, and I think a very solid addition to the line. 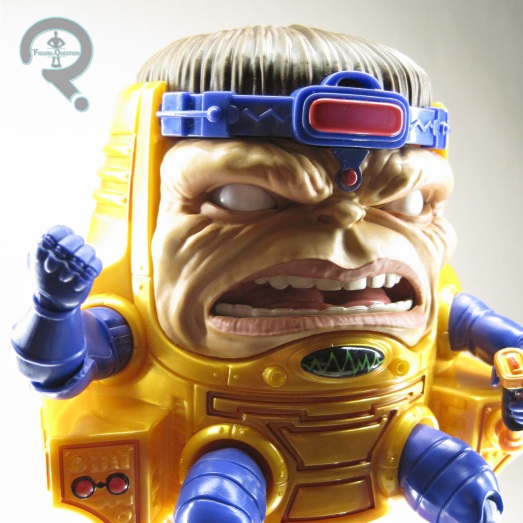