“Wanda Maximoff’s abilities of telekinesis, energy manipulation, and neuroelectric interfacing allow her to read thoughts and give her targets walking nightmares.”

Forgive me if I opt to find a story about someone’s struggle to come to terms with a devastating loss of a loved one, and subsequent efforts to do everything in their power to hold onto some vestige of that person very relatable at the moment.

Since Elizabeth Olsen’s Wanda Maximoff and Paul Bettany’s Vision were introduced into the MCU, I’ve been excited by the prospects of building their relationship further.  It was touched on in both Civil War and Infinity War, but wasn’t the main focus in either, so I was ecstatic when the pair were given a TV show to further explore their characters and their relationship.  WandaVision was a really fantastic show, which has given the MCU a very stable footing moving forward with its overall narrative, as well as showing that Elizabeth Olsen is very much a bankable talent to keep central to the MCU, even in light of the exit of the films’ bigger name stars.  Her performance as Wanda was nothing short of amazing, presenting a very human character going through very real emotional turmoil, while also building her up to be, very believably, one of the strongest characters in the Marvel universe, as she damn well should be.  Now she’s got herself another action figure, and it’s a cool one, and I feel like she really deserves that. 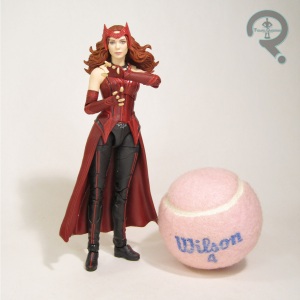 Scarlet Witch is figure 1 in the first Disney+-themed assortment of Marvel Legends.  She’s one of the two WandaVision figures in the line-up, and she’s based on Wanda’s proper Scarlet Witch appearance from the show’s finale.  For the first time, we got a more proper adaptation of something more akin to Wanda’s comics get-up, and boy was that really cool to see.  In general, it’s one of the best costume designs in the MCU, and showcases how well they’re advancing in their abilities to translate costumes from the page to the screen.  It’s got all the proper flair of Wanda’s classic costume, without looking silly at all.  I really dig it.  The figure stands about 6 inches tall and she has 27 points of articulation.  The articulation scheme on Wanda is pretty nicely handled.  It’s not like it’s revolutionary or anything, but it does what it needs to, and it does it well.  Near as I can tell, Wanda’s sculpt is all-new, with no parts shared with her prior figure.  I thought maybe the hands might be, but the details on the gloves are just a little bit different.  It’s quite a nice sculpt overall.  The likeness on the face is just a little bit closer to Olsen than the prior release, and the hair

has a nice, dynamic feel to it, without being too over the top.  The body has a fairly realistic looking build, and the articulation is worked in pretty well.  The details on the costume are all pretty sharp, and they mostly match up pretty closely to the on-screen costume.  I think, technically, the tops of the gloves go a little bit too high on her arms, but it’s a very minor detail.  The figure’s paint work is generally pretty impressive.  She’s got the printed face, which is quite life-like, as well as some pretty decent accenting on her hair.  The rest of the application is also all pretty clean.  Technically, there are a number of parts of the costume that should be a bit darker, but I think it’s also very possible that some of it really comes down to the exact lighting in the show.  I’m happy with the color scheme presented here, and it’s not like it’s very far off if it is at all.  Wanda is packed with two sets of hands (one in standard color, one in translucent), two energy effects, and a piece of Captain America’s wing.  I know some people were hoping they might throw in the cape she was sporting in the final stinger, but it’s admittedly not part of the main chunk of the episode where this look appears, so I understand why they may have left it out.  Still wouldn’t have minded getting it, of course, but not having it doesn’t ruin the figure for me.

WandaVision was a very impactful show for me.  It was one I was looking forward to as soon as it was announced, and by the time it actually dropped, the subject matter had become very poignant for some of the struggles I was personally going through.  In light of the last month, it’s become even more so for me, and I have particularly been holding onto Vision’s dialogue about grief being love persevering the last few days.  All of this has served to make Wanda an incredibly relatable character for me, which gives this figure a little extra weight.  She’s a very nice figure of a very nice design, from a very nice show.  I really like her. 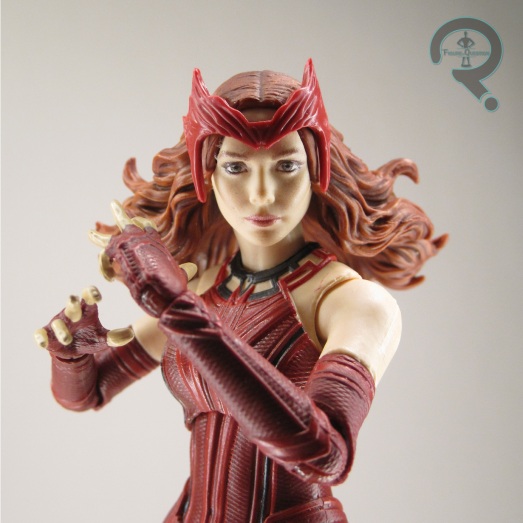