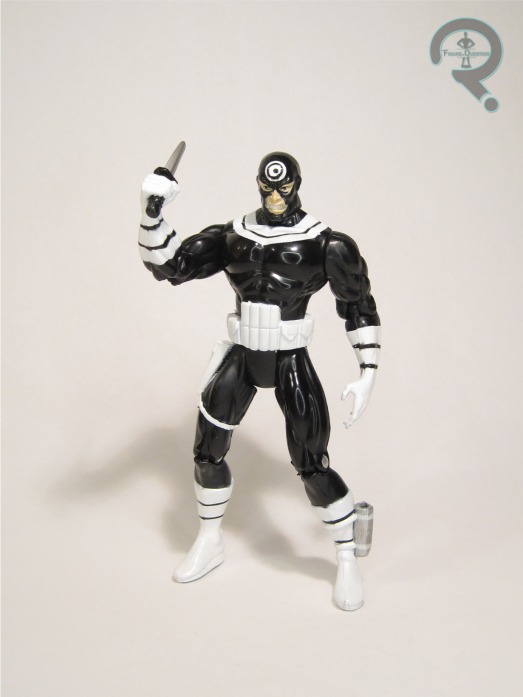 He’s maybe not Daredevil’s most prominent villain, but Bullseye’s probably his most *consistent* villain.  While DD’s other foes either didn’t start as his, or got passed off to other heroes, Bullseye actually debuted in DD’s book, and stayed with him most of his career.  How kind of him.  Of course, with Daredevil not tending to get his own dedicated toylines, that does mean that there are less reasons for him to get toy treatment.  That being the case, his first figure wasn’t a mainstream release at all, but rather an exclusive. 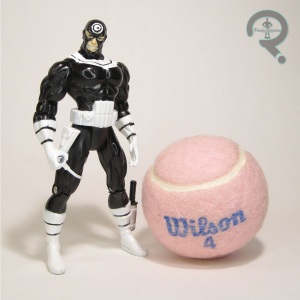 Bullseye was the mail-away exclusive offer in ToyFare #1, made available to order in September of 1997, and shipping out early the next year.  Bullseye’s costume really hadn’t changed much at this point in his career, apart from some minor adjustments here and there.  This one went for the most adjusted possible appearance, in order to keep him more current.  The figure stands a little over 5 inches tall and he has 9 points of articulation.  Structurally, Bullseye was built mostly out of parts from Punisher, with the head of Scorpion, both from the Spider-Man line.  Since they’re the same line and roughly the same time, the parts mesh together pretty decently.  The head maybe looks a bit too small, and it’s sort of tilted downward, but it generally works, and the parts do match up alright with Bullseye’s usual depictions.  The paint work on Bullseye is alright.  It gets the important details and he looks the part, but the application could certainly stand to be a little cleaner.  The stripes on the boots and gloves are a little uneven, and the paint on the face doesn’t quite seem like it knows exactly where it wants to go.  Overall, though, he’s about par for the course on these.  Accessories were a rarity on these figures, but Bullseye does actually get one; he’s got the same small knife that was included with Punisher, presumably so as to not leave him forever with an empty sheath on his leg.

Bullseye is one of the most recent ToyFare exclusives that I acquired.  I picked him up in late 2019, as part of a collection of otherwise ’90s DC stuff that came into All Time.  I wasn’t really expecting him to be there, you know, being Marvel and all, but he was, which saved me the trouble of tracking one down.  He’s not much to write home about, I suppose, but he does an alright job of capturing the character, and he’s a good choice for re-use, because he really doesn’t suffer much from the lack of new parts.  Ultimately, a decent addition.