“Bloodsport is a world-class marksman specializing in brutality—his hands, and anything he wields with them, are deadly weapons. Trained by his mercenary father from the moment he was born, this hardened criminal has but one soft spot…which, of course, Amanda Waller uses to persuade (i.e. blackmail) him to join the Squad.”

When Will Smith was unavailable to reprise his role as Deadshot for The Suicide Squad, the film needed to fill his role in the line-up with someone with a similar energy.  Idris Elba was rather quickly announced as Smith’s replacement, initially just as a recast Deadshot, but ultimately as a different character entirely.  Bloodsport’s a rather minor Superman foe, created by John Byrne during his post-Crisis run on the book.  He’s never amounted to much, and he’s ultimately something of a blank canvas.  Honestly, he’s in a very similar spot to Deadshot himself when he was added to the Squad’s initial line-up in the ’80s, and that similarly allowed Gunn and Elba to craft a character that goes far beyond the simple quick replacement for Deadshot that he could have been.  He’s key to the core arc of the film, and gets his own unique spin on something of a tried and true backstory.  Bloodsport was central to a lot of the film’s marketing, so it’s no surprise to find him amongst the figures we got for the toyline.

Bloodsport is the second figure in the Suicide Squad-themed assortment of McFarlane’s DC Multiverse.  In true McFarlane fashion, there are two versions of the figure available: masked and unmasked.  I’m looking at the masked version, which is the standard release, while the unmasked is a Walmart exclusive.  Given that he’s pretty evenly splits his time between the two looks in the film, it would certainly have made far more sense to include two heads with one figure, especially since literally everything else about the figure is the same, but that’s not how McFarlane’s ever operated, really.  I mean, at least it’s not like the Justice League Batman, where you have to buy no less than three of the same figure to get each minor tweak on his goggle/mask placement.  It could be worse, you guys.  The figure stands just over 7 inches tall and he has 36 points of articulation.  The Suicide Squad figures make use of rubber torso covers to allow for a little more range of motion to their torso joints, which is I suppose not the worst idea.  It’s not a lot more range, especially on Bloodsport, but it does give him a little more flex, which isn’t a bad thing.  Otherwise, the articulation works much like any other Multiverse figure, which means there’s an alright range, but it doesn’t always look super pretty.   That said, Bloodsport’s joints impede his aesthetics less than others from the line, so it’s a mark of some improvement.  His sculpt is largely pretty good.  He’s got more going on than Polka Dot Man, so there’s more for them to work with.  There’s a lot of layering and texturing, which all works pretty well, especially the texturing.  Some of the details, especially on the torso, are slightly soft, and I’m really not a fan of the front butt thing he’s got going on with his pelvis, but it generally looks

good.  Obviously, the head has no likeness, but it matches well enough with the helmet design from the movie, and quite frankly, it doesn’t look any less like Elba than McFarlane’s actual unmasked head does.  There was initially some belief that the two Bloodsports might get different paint schemes, since the stock photos were quite different.  As it turns out, that’s because the unmasked shots were just on the actual production body.  Gone are all of the actual accents or the proper bronze coloring, replaced by a slightly metallic orange, that’s really much too bright for the character.  The general scheme is there, but the figure definitely lacks something.  I’ve already modified mine to do some panel lining and proper accenting (though the photos still show him unmodified), and it makes the figure look a lot better, for what it’s worth.  It’s just a shame he’s not like that out of the box.  Bloodsport is, in the movie, typically depicted with projectile weapons, but for the purposes of this figure, he gets two swords, which don’t feel quite his speed.  To McFarlane’s credit, they’re based on a sword that Bloodsport has in the film briefly, but it’s really brief.  Word is that Warner doesn’t want their figures coming with guns, and that’s why the swords instead.  Given the very sci-fi nature of Bloodsport’s weaponry, you’d think an exception could be made, but I can believe McFarlane’s hands were tied on this one.  At least he got *something*.  Also included is a display stand, a collector’s card, and the torso to King Shark.  Compared to Polka Dot Man, he does feel slightly light.  If only we could have gotten, oh, I don’t know, an unmasked head…

When these were first shown off, I was really only interested in Bloodsport for the purposes of getting the King Shark part.  Then I saw the movie, and I really, really enjoyed the character, and that made me actually really want his figure.  I opted for the masked version, largely because it’s the easier of the two for me to get, and also doesn’t require me to step into a Walmart, but also because I really wasn’t feeling McFarlane’s take on Elba.  This is a figure that needs some work to really make him shine, but ultimately I’m still very happy with him, flaws and all.  If anything, that little bit of work makes me appreciate him all the more, and feels almost appropriate to the character.

Thanks to my sponsors at All Time Toys for setting me up with this figure for review.  If you’re looking for toys both old and new, please check out their website and their eBay storefront. 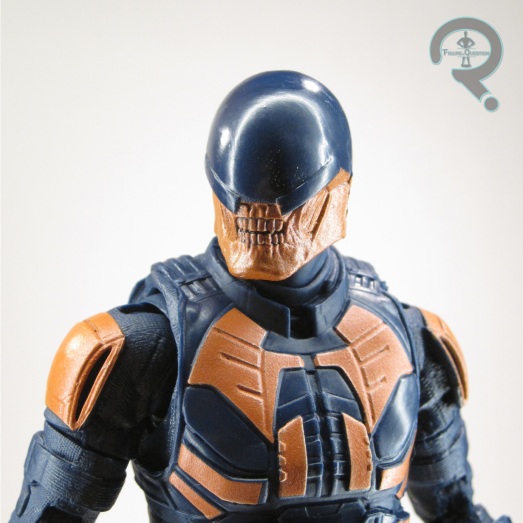