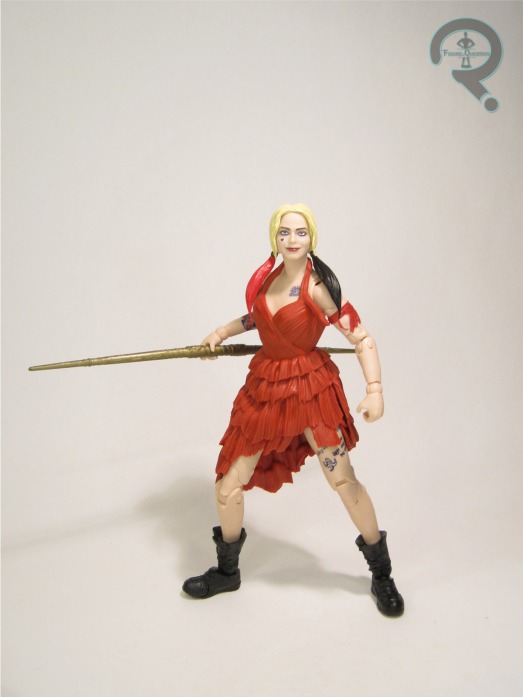 “Harley Quinn, re-incarcerated for making a cash withdrawal with her car, buys her freedom once more by joining the Squad.  This colorful, cheeky, cheerful psychotic still has all her deadly dynamic moves, and the single-and-ready-to-mingle rogue is as eager as ever to show them off…much to Amanda Waller’s dismay.  But Harley, in her signature, ladylike style, isn’t afraid to manhandle anyone who comes her way.”

The Suicide Squad is a film that is, simultaneously, it’s own movie, and also a sequel to Suicide Squad. It’s a weird spot for a movie to be in, but it honestly handles things pretty well, by keeping just enough from the prior film to feel like it’s truly building something more, while also being light enough with pre-existing backstory that you don’t have to see the last one to understand what’s going on in the slightest.  One of the few characters to be carried over between both films is Margot Robbie’s Harley Quinn.  I felt the role wasn’t really written to Robbie’s talents in the first film, but TSS gave us a Harley that was the best version of the character pretty much since Batman: The Animated Series.  I found her to be a thoroughly likable character, and Robbie was given a great chance to shine.  As the highest profile character in the movie by far, Harley is of course one of the figures in the tie-in line, and I’ll be taking a look at her today.

Harley is figure 4 in the Suicide Squad-tie-in assortment of McFarlane’s DC Multiverse.  Harley gets two distinct appearances in the film, but this figure opts for her disheveled party dress look, which she has for most of the film’s run-time.  While I’d still like to see her jumpsuit and goggles look, I can understand doing this one first.  The figure stands just over 7 inches tall and she has 36 points of articulation.  After ragging on McFarlane about articulation implementation yesterday, I do have to give them a little bit more credit today, as Harley’s joints aren’t nearly as detrimental to the sculpt when she’s posed.  The elbows and knees in particular are a much smoother transition, and I do appreciate that McFarlane’s been good about making sure their female figures get double joints too.  Harley’s sculpt is generally a pretty decent one.  Her arms and legs are perhaps a touch lanky, and the dress is a solid chunk of largely unmovable

rubber, but it looks good, and the Margot Robbie likeness is undoubtedly one of McFarlane’s best real person likenesses.  It’s still not perfect, mind you, but it’s still really good.  Harley’s paint work is a mix of kind of phoned in and really intricate, which is sort of weird.  The base work is all just sort of there, and much like Bloodsport, I really feel there are some areas that would benefit from some accenting, namely the dress and her hair.  However, there’s some really clean, sharp detail work going into her tattoos, which shows that they were at least trying.  And I can certainly appreciate that.  The no guns rule means that Harley doesn’t get any of her firearms, but she does at least get Javelin’s javelin, which is a pretty nice plot relevant piece, and one that makes her feel less lacking than Bloodsport or Peacemaker.  Also included is a display stand, a collector’s card, and the legs to King Shark.

Harley was the figure I was most dragging my feet on in this line-up.  I was purely just grabbing her for the King Shark legs.  Then I saw the movie, and I was really happy with how they handled the character, and suddenly I was really wanting this figure.  She’s honestly pretty good, and shows that McFarlane is stepping up their game in terms of figures based on real people.  I’m still hoping to see the other look, too, but this one’s a very good one for now.

Thanks to my sponsors at All Time Toys for setting me up with this figure for review.  If you’re looking for toys both old and new, please check out their website and their eBay storefront. 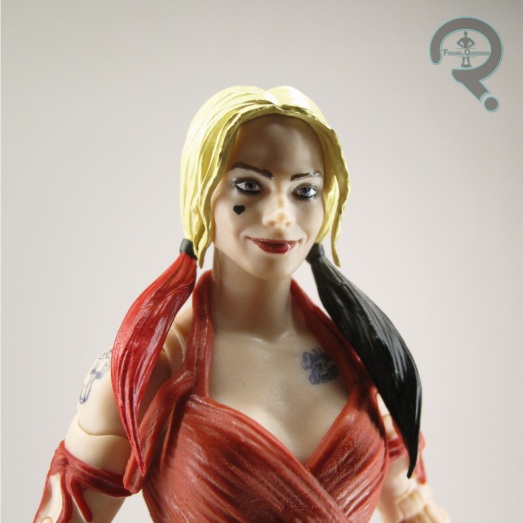