With Avengers: United They Stand’s shifted focus on the team’s lower tier characters (for the time, anyway) placing Ant-Man as the show’s central character, it also made for some great extra focus on Hank’s long time partner in fighting crime, Janet Van Dyne, aka the Wasp.  Though she’s always been pretty central to the team in the comics, UTS marked the first time she got any real time in the spotlight with the general populace. And, it got her a third action figure, so that’s pretty cool. 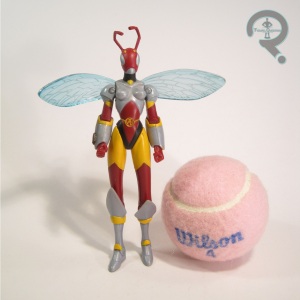 Wasp was part of Series 1 of Toy Biz’s Avengers: United They Stand tie-in line, which hit shelves at the same time as Series 2 in the back half of 1999.  The figure stands about 5 1/4 inches tall and she has 16 points of articulation. Wasp isn’t quite as well articulated as Ant-Man (admittedly the best articulated of this particular line), but she’s still better than most figures of the era.  The only thing that really holds her back are those dreaded v-hips, but that was something we’d still be dealing with for another several years. She also benefits from separately articulated wings, as well as a moving “stinger” piece, which is unfortunately missing from mine. Wasp’s sculpt was an all-new, totally unique piece, based on her design from the show, albeit in that slightly tweaked style that we saw with Ant-Man.  Her design from the show was certainly an overhaul of how she tended to look in the comics, but it’s also a far cry from her worst look over the years.  It’s certainly a more armored look, but it was the end of the ‘90s.  This is just how we dressed then, guys.  The sculpt captures the design well enough, and makes it work in the context of Toy Biz’s wider Marvel line at the time.  Probably the weirdest part of the sculpt are the arms, which are a touch too short, comparatively.  Otherwise, it does look pretty solid.  She has two different heads for the purposes of helmeted and unhelmeted looks.  Both sculpts are nicely rendered, and they swap out pretty easily.  Wasp’s paint work is generally pretty solid.  It’s all base work, but it’s cleanly applied, and it’s a little more involved than just a straight recreation of the show’s color scheme.  In addition to the previously mentioned extra head, Wasp was also packed with a small missile launching drone.  It’s a goofy, rather extraneous piece, and that’s probably part of why I have no clue where the one that came with my figure has wound up.  Honestly, the extra head is enough to make it feel worth it.

Like Ant-Man, Wasp was one of the last figures I got from this line, since my dad had the first one we found. So, she was on that list of the final three figures I gave to my Grandmother, and she picked this one up for me the week after I got Ant-Man.  I was again pretty excited, and she’s another one that I still really like all these years later.