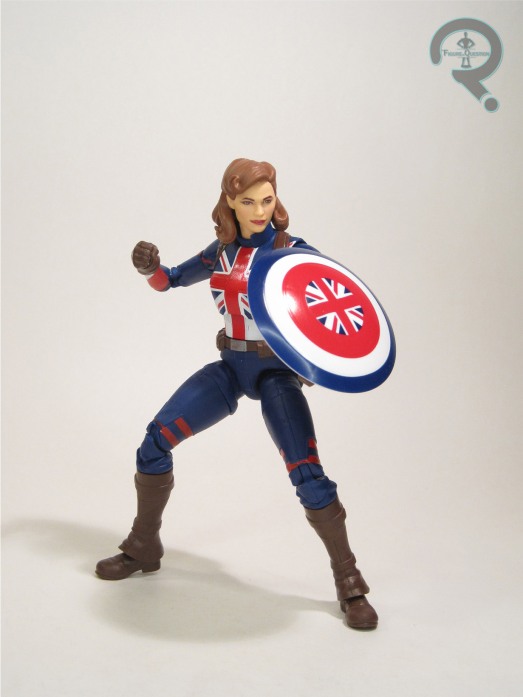 Kicking off the What If…? show was a concept that goes back to the earliest days of what we’ve seen of the MCU (so far, at least; Eternals is definitely gonna change that), with a story that slightly deviates during the events of Captain America: The First Avenger, presenting a version of events where it’s Peggy Carter, not Steve Rogers, who becomes the Super Soldier.  By far, it’s the season’s strongest entry, wonderfully capturing the look and feel of the original film, while also doing a fantastic job of exploring in depth the changes that Peggy as a Super Soldier would cause.  And, hey, there’s obviously a figure, because why wouldn’t there be?  Let’s see how she turned out! 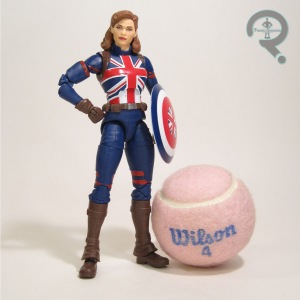 Captain Carter is figure 2 in the Watcher Series of Marvel Legends.  She’s specifically based on her design from the first episode of the season, while she’s fighting Hydra in the ’40s.  It’s the look that got the most play in the lead up, and it’s also the one that matches up with Hydra Stomper, who’s also in the first drop of figures, so it’s a solid choice.  The figure stands just shy of 6 1/2 inches tall and she has 31 points of articulation.  Compared to the two other figures I’ve looked at so far, Peggy’s articulation scheme is closer to Zombie Cap.  It’s not quite as optimized as Zombie Cap’s was; there are a few more restricted joints, especially at the neck (due to the hair), and the elbows and knees aren’t quite as smoothly worked into the body, but it’s generally very workable, and she’s pretty stable on her feet, which are definite pluses.  Peggy’s sculpt is a completely new affair, though it’s already been slated for a repaint for the Target-exclusive Stealth Captain Carter that’s coming next spring.  The sculpt is quite a nice piece.  She’s definitely inspired by the animation style, more so than being a strictly realistically styled figure, but she doesn’t go as far with it as the T’Challa figure did, which means she has an easier time slotting in with other figures from the main line.  It’s a very nice middle ground, and I think it makes for the best possible toy adaptation.

Though technically a slightly cartoonized take, the likeness on the head is an even better match for Haylee Atwell than the movie-style Peggy, and is just genuinely one of the nicest head sculpts that Hasbro’s done for a Legends figure.  The detailing on the rest of the sculpt is quite nice; in order to keep with the animated look, much of the texturing and such is a lot smoother, but there’s still a lot of detailing on the actual line-work of the uniform.  Peggy’s construction uses a lot of smaller parts for the assembly, so there doesn’t have to be quite as much actual paint.  It means that the base color work is all very clean, since it’s not actually paint.  What paint is there is generally pretty decent.  The work on the face is definitely the best work.  There’s some slop on the red parts on the torso, but otherwise it’s generally pretty clean.  Peggy is packed with her version of the vibranium shield, as well as both arms to the Watcher Build-A-Figure.  The shield is smaller than Steve’s, and it’s hard to tell if that’s accurate, since it does seem to fluctuate in size based on what it’s doing in the show.  Generally, it seems to scale well to her, though, and they actually gave her a gripping hand for actually holding the straps for a change.  I’ll call that a win for sure.

Captain Carter was very definitely the concept I was looking forward to the most when What If…? was announced, and it was by far my favorite episode of the season.  I pretty much just loved every minute of it, really.  I was absolutely down for this figure as soon as she was announced, and she was the figure I was most looking forward to in the main assortment.  There was a pretty high bar for this figure to clear, and to Hasbro’s credit, I really feel they cleared it.  This is one of my favorite Legends of the last year, and she’s just a good all-around toy.  I can’t wait to get Hydra Stomper in hand to go with her!