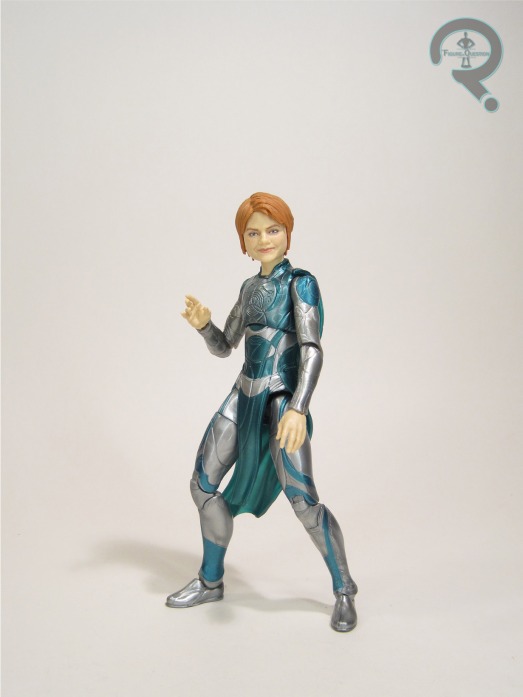 “Sprite has the ability to cast lifelike illusions and is an Eternal much stronger and cleverer than she appears.”

Ah, yes, Sprite.  That refreshing lemon lime taste.  You know, for when they don’t have, like any of the drinks that you actually wanted.  Or maybe they didn’t have Sprite either.  Is Sierra Mist okay?  …Did you guys like that?  Did you like my beverage-related joke?  You see, it’s funny, because….ahem…her…uhh…her name is the same as a, uh, beverage.  I am the peak of humor and whit.  Laugh at me, damn you.  Or, with me, rather.  Not at me.  That would be cruel.  Maybe instead of laughing at me, you could just read my review.  That would work alright for me.  Is Sprite okay?

Sprite is figure 2 in the Gilgamesh Series of Marvel Legends.  The figure stands just shy of 5 1/2 inches tall and she has 27 points of articulation.  Sprite’s definitely the smallest figure in the bunch, not surprising, what with her childlike appearance and all.  That said, at 5 1/2 inches tall, she’s about a 1/2 inch too tall to be properly in scale with the rest of the set.  This will come up a bit more as we get into the actual sculpt proper.  Sprite’s articulation is rather standard for a female Legend, but like with Makkari, there’s a slightly better range of motion here.  Not quite to the same level as Makkari, but still better than some of Hasbro’s earlier offerings.  Her sculpt is all-new, and it’s…well, it’s not terrible, but it’s also not the strongest.  It’s certainly the weakest of the Eternals sculpts as a whole. The head’s likeness of actress Lia McHugh is far more caricaturized than others.  There are some elements that match up okay, and the general picture isn’t terrible, but it’s also not particularly realistic looking.  The facial expression is definitely going for some sort

of a smirk, but it doesn’t quite land it, so she kind of looks a little gassy.  She’s also got one heck of a lantern jaw, which is weird looking at this scale.  Additionally, the fact that she’s too large translates to an issue here, because her head is just…big.  Too big.  It looks almost alien when compared to the others.  The body sculpt is at least a pretty decent piece.  It recreates her costume from the movie pretty well, and there’s even a nice dynamic flow to her cape and skirt pieces.  It’s still a bit too large scale-wise, but it’s less an issue here than with the head.  Sprite’s paint work is alright overall.  The outfit is cleaner than Ikaris’s, which is a plus, and the face is at least rather lifelike.  Sure, the underlying sculpt is still a little wonky, but the paint does its best to make it work.  Sprite is packed with two sets of hands, in open gesture and in fists, as well as the torso for the Gilgamesh Build-A-Figure.  She could definitely use some effects pieces of some sort, but she does at least get the largest piece of the BaF.

I knew only a little more about Sprite than I did Makkari going into the film, and it was mostly that he was generally a rather annoying impish sort of character.  I didn’t really know how much I was going to like the character in the movie when I bought the figure, but I was already in for the whole set.  Ultimately, Sprite’s not my favorite character in the movie, but I can kind of see what they were trying with the character.  The figure….less so.  She’s definitely the weakest of this bunch.  She’s not *awful* but she’s not great either.  I guess it kind of fits with the character.