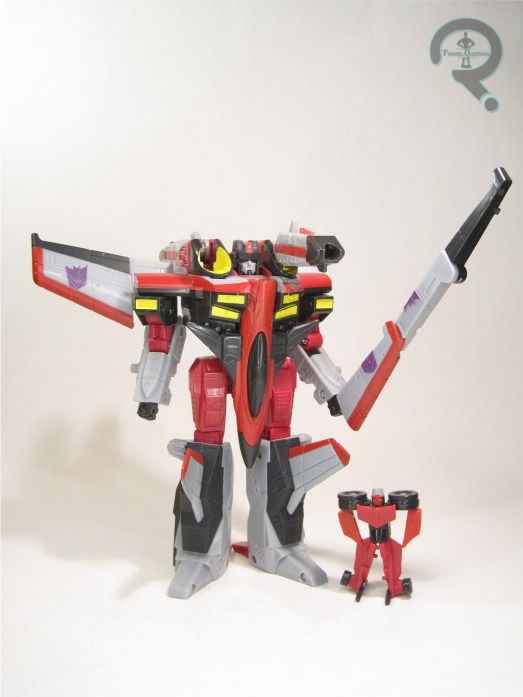 “Starscream uses his speed and maneuverability as a jet to launch aerial attacks on the Autobots. No one can compete with him when it comes to speed and skill in the air. He slices through the sky, chasing the enemy and even endangering any Decpticon that gets in his way. As the second in command, he pretends to be loyal to Megatron, but is always looking for an opportunity to weaken his leader’s rule and take control of the Decepticons.”

Present in the franchise since its beginning, Starscream is a rather inescapable piece of the Transformers lexicon.  Other characters may come and go, but after Optimus and Megatron, the character next most likely to find himself in a given version of the story is Starscream, always Megatron’s lackey, always ready to betray him and take power for himself.  Transformers: Armada actually flipped the script on Starscream a little bit, though.  Rather than being purely motivated by his own self-interests, the Armada Starscream’s inevitable betrayal of Megatron saw him not taking power directly from Megatron, but rather switching to the side of the Autobots.  While still selfishly motivated on the surface, he would eventually find his own more valiant side, and even make a rather heroic sacrifice, something that no other version of Starscream would ever even consider in the slightest.  It was cool change-up, and a fun take on the character.  Helping even more on the fun/cool scale?  A pretty awesome toy, which I’ll be looking at today!

Starscream made up one half of the first Max-Con Class (the line’s equivalent to the modern Voyager Class) assortment of Hasbro’s Transformers: Armada line, released alongside the show’s debut in 2002.  In his robot mode, Starscream stands about 7 inches tall and he has 10 workable points of articulation.  As with most of the other figures in the line, Starscream’s articulation is rather restricted by the nature of his design.  There’s no neck movement, and the shoulders don’t move either.  He’s got some swivels near the shoulders, and some okay leg movement, but there’s not a ton of posing to be had here.  He’s good for one thing, and that’s standing.  The sculpt is a pretty impressive piece.  It matches up well with how he looks in the animation, and it’s got a solid bit of heft to it.  The boxy shapes definitely work well, and his robot mode is well-formed.  There’s a bit of kibble, especially when it comes to the back of the torso, but he generally makes it work.  He’s armed with a folding sword, which is actually his left wing removed and unfolded.  It’s not the most convincing thing, but it works in its own goofy sense.  Also included is his Mini-Con partner, Swindle.  Swindle’s robot mode isn’t quite as strong as Jolt or Blackout’s were.  It’s okay, but not great.  The R&D definitely went to Starscream on this one.  Swindle allows Starscream to unlock the two cannons on Starscream’s shoulders, which each shoot a missile.  The missiles are, sadly, missing from mine.  The cannons also have a tendency to unlatch themselves from time to time, and, if you’re not careful, the latches can wear out, causing them to be permanently be forward.  Fortunately, that’s not the case with mine.

Starscream’s alt-mode is a sci-fi jet.  The transformation is a little more involved than the other two, but he’s a more advanced class, so it makes sense.  It’s still not particularly difficult, and there are also a few spring-loaded components to the transformation.  The end result is a vehicle that’s a little awkward in some spots, but one that also lacks the major under the jet kibble left over from the robot mode, which is something that shows up a lot with the jets.  In his jet mode, there are some sound effects built in; they no longer work on mine, but there are a few jet related sounds.  They’re honestly more annoying than anything, so I can’t say I miss them.  Swindle has his own alt-mode as well; he turns into a racing car, and is honestly more convincing as a car than as a robot.  Now, why a race car robot is packed in with the big jet is anyone’s guess, but I try not to dwell too much.

Of the three Armada figures that my cousin owned for a very brief time and ultimately gave to me, Starscream was definitely his favorite.  When they were in his possession, I didn’t get to play with Starscream the way I did the other two.  So, when he was finally mine, that was a pretty big deal.  Unfortunately, he also wound up being the only one readily available to me to grab when I decided to get rid of a lot of my stuff at around 15 or so.  I wound up selling him off (to All Time Toys, actually, along with a bunch of junk that they honestly gave me more than they should have for), and it’s something I’ve regretted since.  I’ve been keeping my eye out for a replacement ever since.  Fortunately, I was able to snag one from a collection that came into All Time last January.  He was missing Swindle, but Max was nice enough to set me up with a replacement, and boom, here we are.  I really dig this figure.  He’s just a really good, solid toy, and I’m very glad to have him again. 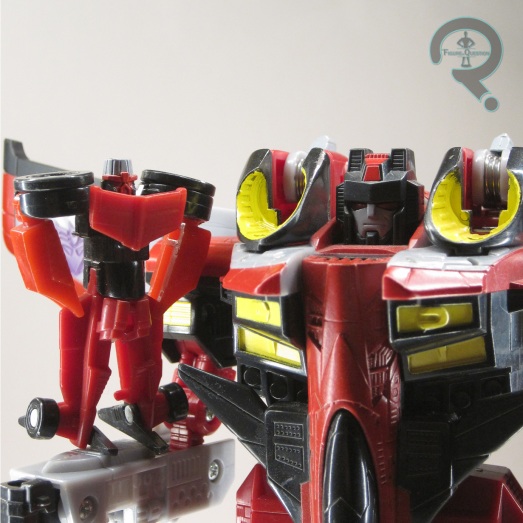