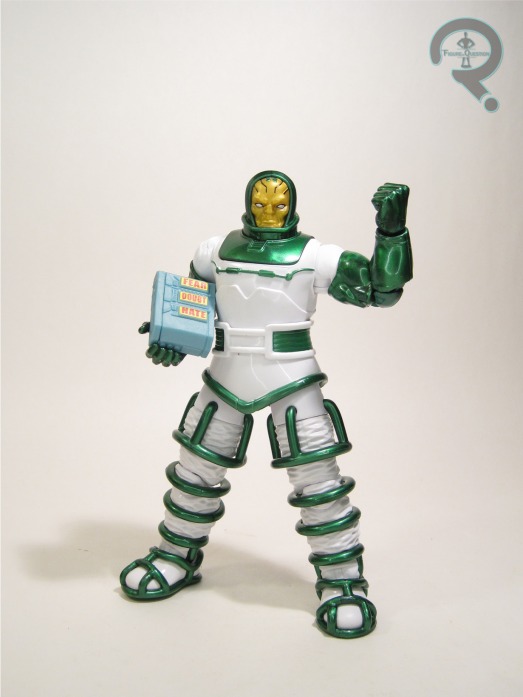 And we’re back to the Marvel Legends.  We’re staying on the FF path for the next two days, resuming today with Psycho-Man, a Stan Lee and Jack Kirby creation the title’s fifth Annual.  He appeared only a few times in the ’60s, before his connection to the Microverse was used to tie the Micronauts into the mainstream Marvel universe in the ’80s.  His connection back to the FF was brought back around during John Byrne’s run on the book, who used the character to, amongst other things, get Sue to accept that she was a bit old to be going by “Invisible Girl” and that she was also the team’s strongest member.  Good story for her, though perhaps not an astounding showcase for Psycho-Man himself.  He does have a pretty killer look, though, and that always makes for a good figure. 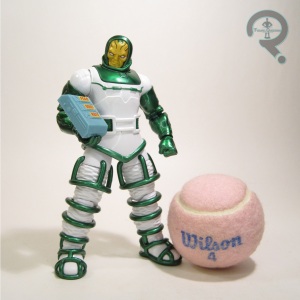 Psycho-Man is part of the FF-themed Retro Collection assortment of Marvel Legends.  He fits in pretty perfectly, since his only other figure was during Toy Biz’s original FF line, which these figures are homaging.  The figure stands 6 1/2 inches tall and sports 28 points of articulation.  His articulation scheme is actually quite impressive given his overall bulk.  The use of ball joints at the neck and mid-torso really give him a nice range, as do the double joints at the elbows and knees.  He’s also using the pinless construction again, which looks nice and sleek.  Psycho-Man’s sculpt is a completely new offering, and it’s a pretty nice one at that.  It’s definitely going more for the Byrne take on Psycho-Man, which is fitting with the theme, and also just the better take on the character, I feel.  It’s a clean, sleek, and very technically impressive.  He’s only got the one set of hands, which has become a rarity these days.  They’re a decent combo as well, at least in terms of posing options and the like.  Psycho-Man’s paint work is pretty straight forward, with the colors being largely reliant on molded plastic.  It all works very well, and I really love the metallic green.  He’s packed with only one accessory: his Control Box, the thing that allows him to control other people’s emotions.  It’s a rather basic piece, but still a rather fun one.  At least he got something, and this does work quit well with his right hand pose, allowing it to be carried under his arm.

Though Psycho-Man’s not really a prominent player in much of anything, I do rather fondly remember his one appearance on the FF cartoon, as well as the figure from the toy line that accompanied, which did get a good amount of use by me on the basis of him just being a pretty great chunky bad-guy toy.  I wasn’t really sure we’d ever see an update on that one, but I sure am glad we did.  This figure is just a pretty solid offering from start to finish, and I can’t imagine there being a better take on the character in figure form.