MASTERS OF THE UNIVERSE: MASTERVERSE (MATTEL)

Masters of the Universe: Revelation‘s first half spends a good portion of it’s post-time-skip time delving into the effects of the power vacuum caused by Skeletor disappearing.  His evil minions fracture, some of them leading their own factions, some of them placing themselves behind a new master within those factions.  Backing up Tri-Klops in his Cult of the Motherboard is the *other* notable tech guy from within Skeletor’s ranks, Trapjaw, whose new figure I’ll be taking a look at today! 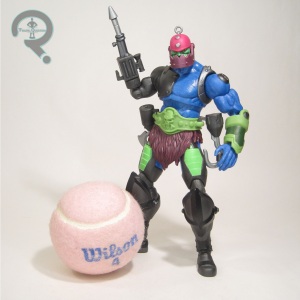 Trapjaw is another figure in the deluxe-line-up of Masters of the Universe: Masterverse.  While the deluxes don’t have the same strict assortment structure as the main line, it’s worth noting that Trapjaw and Tri-Klops were solicited and shipped together (alongside the third assortment of the main line).  As with Tri-Klops, Trapjaw uses the deluxe price point to go for more of a two-in-one approach, although it does work out *slightly* differently here.  I’ll get to that in a moment.  The figure stands just over 7 inches tall and he has 31 points of articulation.  His articulation is slightly changed from the main line body; the right arm lacks the double elbow and wrist movement, but he gains the extra joint on the jaw.  And, while the general layout of the leg articulation is *technically* the same, it’s not quite as effective in how its implemented, since the layout leaves his feet slightly outwardly pointed at all times, and means his knee pads won’t always line up  with the knees, since they’re connected to the boot.  Trapjaw’s sculpt is almost entirely new, apart from sharing the lower torso and pelvis with the main male barbarian body.  The core body is patterned

on the classic Trapjaw look, with his more fully armored up appearance and everything.  It’s generally pretty cool.  There’s still the issue with how the legs work, but they look alright, and match alright with the animation model.  The head is quite impressive, and surprisingly gruesome.  He’s still got his tongue and everything.  Removing his upper belt and swapping in the tunic, tabard, and alternate belt allows Trapjaw to be converted to his cultist look.  It captures the overall essence of the look, but I don’t feel it’s quite as effective a transition as Tri-Klops’ was.  Still, it’s a nice option to have, and it’s still going to be my preferred look.  Trapjaw’s paint work is generally well handled.  There’s some slight slop in a few spots, but it does what it needs too, and there’s some particularly nice accent work on the face.  Trapjaw is packed with three different attachments for his mechanical arm, as well as two left hands.  The attachments look cool enough, but the post that they go onto is really thin, which is a little worrying in terms of long-term durability.  Likewise, they don’t quite hang on the classic belt right when in storage mode, which stretches out the hooks a little bit, again with the concerns for long-term durability.

I have less investment in Trapjaw as a character than I do Tri-Klops, but I did like the whole cult angle, and what good is cult leader Tri-Klops without any cultists to lead.  In the box, this guy looked pretty impressive.  Out of it?  Less so.  I want to like him more than I do.  There are definitely cool elements, but other parts feel a bit half-formed or phoned in, and he just doesn’t quite stick the landing the way Tri-Klops did. 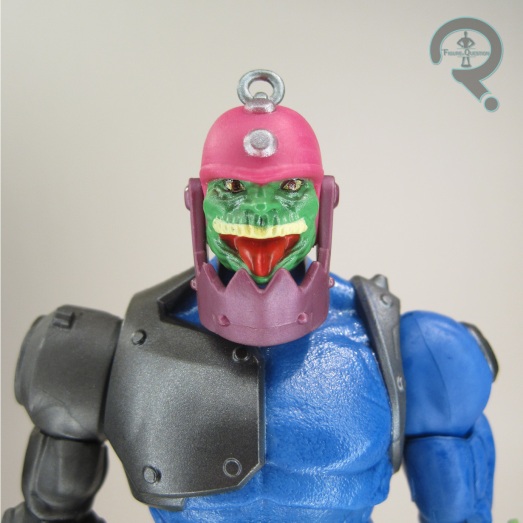