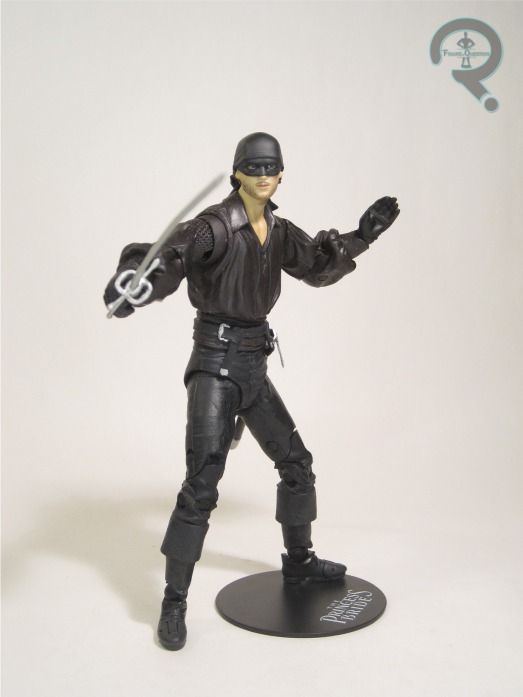 While Princess Buttercup is the titular character of The Princess Bride, the story’s dashing hero is her love Westley, a former farm-hand, drafted into the life of piracy by the Dread Pirate Roberts (or at least a man using that name).  Westley himself adopts the title and uses it when going on his rescue of Buttercup, following her abduction by Vizzini and his crew.  Westley’s Dread Pirate Roberts attire is one of the film’s most classic looks, making it a logical choice for merchandising opportunities.  That’s not changed with the McFarlane offerings, which include Westley amongst their first assortment.

The Dread Pirate Roberts is another piece of the first standard assortment of McFarlane’s The Princess Bride line.  He’s presented here in the full Dread Pirate attire, from before his encounters in the fire swamp.  While the rest of the cast’s treatment has been rather sparse, we’ve had a couple of releases of Westley, specifically in this look, over the years, including one in the very same scale courtesy of NECA.  This one is markedly more articulated than the last.  He stands just over 7 inches tall and he has 35 points of articulation.  Apart from some slight limitations at the elbows, which are honestly to be expected, Westley’s articulation is decent in its range of motion.  Westley’s sculpt is all-new, though a good portion of it will be shared with the second assortment version.  It’s alright.  That’s really the best I can muster.  The individual parts have their strengths, to be sure.  The head sports a passable likeness of Cary Elwes, and the construction of the mask is well handled, with its multi-part construction.  I do miss the slight smile of NECA’s sculpt, but I suppose this expression works well enough for him.  The details of the outfit are pretty

sharply handled as well.  The trouble is how it all fits together.  His neck is far too scrawny compared to the head, the articulation of the shoulders makes the arms look disjointed from the torso, and the figure’s pelvis is oddly flat and elongated.  It takes him just a step away from dashing hero, and ultimately lands a little closer to goofy caricature than it should.  The paint work is rather basic, mostly relying on molded colors for the black sections.  It would be nice to see some light variation in finish, especially for the mask, but it reads well enough for what it’s supposed to be.  The part gets the most of the actual paint work is the face.  It’s not awful, though the scruff on the face seems a little heavier than it should be.  Also, once again, he’s got the side-eye going on, which is rather limiting, and is also in the opposite direction of his sword hand, which makes posing tricky.  And that brings us to the accessories.  He’s got his sword and a stand.  It’s not bad, but it’s also very bare bones.  Once again, an alternate head without the side-tracking eyes would be nice, or, I don’t know, perhaps a left hand that could actually hold the sword?  It’s kind of a key piece of the fencing scene, and at the very least, it would allow him to point the sword in the direction the eyes are looking.

This figure is quite certainly the weakest of the bunch in this round.  It’s definitely amplified by there being a version of him in this scale already, but this guy’s just got issues with his assembly, to say nothing of the eye issue cropping up once again here, and then that very issue highlighting the problems with the accessories.  He’s not bad, and as with the rest of the set, he’s better than I expected, though he’s closer to the quality I’d expected than the rest of them. 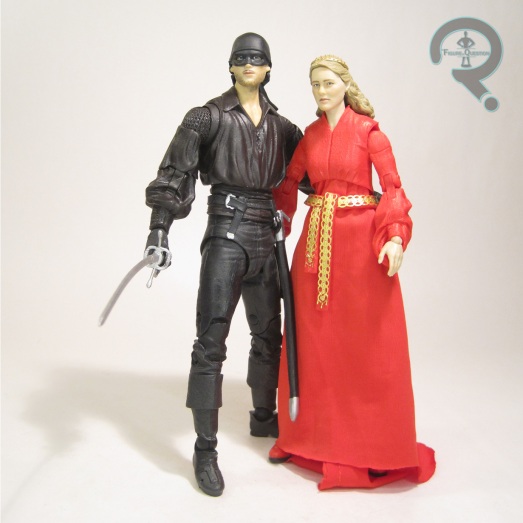