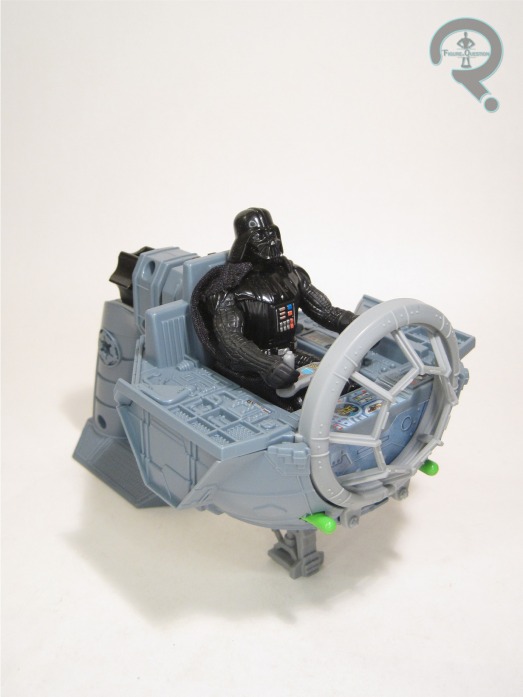 Back in the far off times of 2018, I reviewed two figures from the “Gunner Station” sub-branding of Kenner’s Power of the Force II line.  The gunner stations served as a more concise and themed continuation of the Deluxe sized figures for the line, and Luke and Han in their respective stations from the Millennium Falcon‘s dogfight in A New Hope were a pretty logical choice.  I guess Hasbro felt that they hadn’t quite heavy hitter-ed it up enough, though, so there was one more figure in the set.  It’s a Darth Vader, whose “Gunner Station” comes in the form of the cockpit of his TIE Fighter.  Yeah, it’s definitely a bit of a stretch.

Darth Vader with the TIE Fighter Gunner Station was added to Power of the Force in 1998, alongside the previously reviewed Han and Luke.  Where the other two have designs very much dialed into a very specific moment of the first film, this version of Vader continues the PotF Vader trend up to this point of being a loose amalgamation of Vader’s look in all three of the films.  The figure stands a little over 3 3/4 inches tall and he has a whopping 8 points of articulation.  Yes, in addition to the usual articulation for the line, this Vader also got knees.  It’s so much movement, you guys!  Structurally, he’s very similar to the other Vaders of the early run for the line, with the notable difference of having the knee joints, as well as a slightly more rigid stance.  Han and Luke both had some slight sculpting improvements from earlier releases, and this figure also came out the same year as the one with the removable helmet, which sported a far improved sculpt of its own.  So, this one feels a little behind the times, comparatively.  Beyond that, I guess he’s alright.  He keeps all the detail work, and swaps out the plastic cape of the prior figure for a cloth one, which is admittedly better for sitting in a cockpit.

The figure’s color work is generally pretty basic, with mostly molded black.  There are a few smaller accents, which follow the look from the movie closely enough, and keep him from being *too* drab.  Vader includes no smaller accessories, so there’s not lightsaber or anything.  He instead gets the Gunner Station thing.  It’s meant to look like the cockpit of his TIE Figher, which I guess it does alright.  There’s no upper half, of course, nor are there wings or anything.  There’s part of the window, and a weird handle thing, so that you can, like, hold it as a gun or something?  I’m a little confused about the exact intended use, to be honest.  It gets some missiles, which you can launch from the front of the “vehicle.”  And that’s really about it.

This is one of those items that’s so nonsensical and far reaching, that I actually don’t think I even realized it existed when I was a kid.  I remember the other two, of course, but this one just slipped from my radar, at least until I had reason to really look into it again, after digging more into the whole line.  I got one when it got traded into All Time, because, well, I didn’t have it, and it’s also just really cheap.  It’s an odd piece.  It just feels very forced, like they really just wanted another Vader on the market, but didn’t know exactly how to get to that point logically.

Thanks to my sponsors at All Time Toys for setting me up with this figure for review.  If you’re looking for cool toys both old and new, please check out their website.