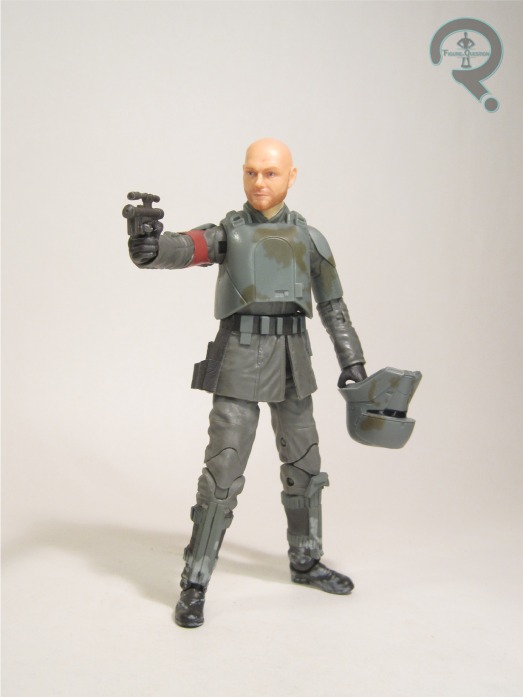 “A hot-headed ex-Imperial sharpshooter, Migs Mayfeld was once the leader of a gang of criminals. Mayfeld’s old ties help The Mandalorian on his mission to rescue Grogu from Moff Gideon”

We’ve been seeing some lulls as of late in some of Hasbro’s major lines.  Not all at the same time, of course; they’ve been kind of rotating a bit.  Hasbro’s still having some noted issues with proper distribution, and all that, resulting in some lines being few and far between on their releases.  I looked at one Black Series figure over a month ago, which was actually one that had been sitting in my “to review” pile for several months.  Before that, my last three Black Series reviews have all been reissues of one form or another.  How about something new for a change?  Well, newish.  Migs Mayfeld was first introduced in The Mandalorian‘s first season, as point man for the group performing the heist in “The Prisoner.”  He was portrayed by stand-up comic Bill Burr, noted for his (likely comedically exaggerated) dislike of the franchise, and was, at least in his first appearance, really just playing himself…IN SPACE.  The character returned during the show’s second season, in the episode “The Believer,” which gave the character a surprisingly effective emotional journey, and gave Burr a chance to deliver an incredibly nuanced performance, far outside of his usual range.  This second appearance rather resonated with viewers, making it the natural choice for the character’s first figure treatment, which I’m taking a look at today! 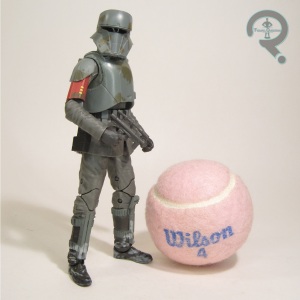 Migs Mayfeld (Morak) is figure 15 in the Mandalorian sub-set of Black Series‘ Phase IV incarnation.  He’s one of three Mando-themed figures in this particular assortment…not that I’ve actually had the chance to see the whole assortment, or anything, of course.  Just Mayfeld.  Mayfeld is based on his disguised appearance from “The Believer,” after he and Mando steal Transport Driver armor to infiltrate the Imperial base on Morak.  It’s what he’s wearing during what’s really the character’s most definitive scene, and it also means that he can double as a Transport Driver, should you want such a thing.  The figure stands just shy of 6 inches tall and he has 27 points of articulation.  Since Mayfeld is disguised as an Imperial, it makes sense for the figure to re-use some Imperial tooling.  While the Transport Driver isn’t strictly speaking one we’ve gotten before, it’s show design was heavily built from the Mudtrooper design we saw in Solo.  Subsequently, a good portion of this figure is making use of the Mudtrooper Han parts.  It’s a solid sculpt, and not one that really got out there, so it’s a fairly sensible re-use.  Apart from the collar of the undershirt not being the same, and there being some lingering holes in the back meant for the hoses from the Mudtrooper mask, it’s a close enough sculpt to work.  He gets a new skirt piece, with his slightly tweaked belt and holster, as well as a new head and removable helmet.  The helmet is on in the package, so you can’t actually see the Burr sculpt at all until its opened.  You almost have to wonder is Burr requested that, since it’s out of the ordinary for how such figures are usually packaged.  The helmet is supposed to be the same 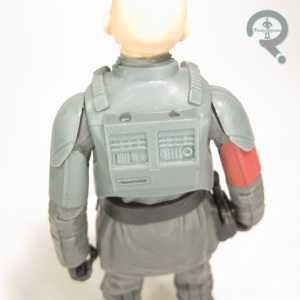 one that the Tank Pilots were sporting, and it matches up pretty well, while still being removable.  Under the helmet is the proper Mayfeld sculpt.  It’s a pretty solid one, if perhaps a touch too large for the body.  The likeness to Burr is fairly strong, and it’s great that he’s got an expression that really breaks from the usual emotionless appearances we tend to see on these.  Mayfeld’s paint work is generally decent, with one notable thing that I hesitate to really call an “issue;” it’s more of a discrepancy.  The armor on his right arm is red, as it was on the Han figure, denoting a higher rank.  However, Mayfeld’s armor in the episode is without this extra coloring; it’s Mando who gets the extra detail on his armor.  So, this one gets extra paint that he shouldn’t technically have, which is the opposite direction that such issues tend to go with paint.  At this point, I wonder if Hasbro might intend to just give the inevitable disguised Mando the green arm, just so that you can swap them both for the proper set-up.  That said, VC made the same mistake on Mayfeld, and Mando was still sporting the red as well, so perhaps Mayfeld is just cursed to be given a promotion.  Worse things have happened.  Mayfeld is packed with the previously mentioned removable helmet, as well as a small blaster pistol, which is a pretty key accessory for him.  It’s kinda light, but it also covers the basics, so I’m not too bummed about it.

Mayfeld was a character that I had no issues with in his first appearance, but not one I was particularly intrigued by, or eager to see more of.  That said, his reappearance in “The Believer” was genuinely one of my favorite parts of the second season.  So, the announcement that he was getting a figure based specifically on that episode was cool by me.  Plus, it’s a Bill Burr figure, which is kinda cool in and of itself.  The figure turned out pretty well overall.  The issue with the coloring on the arm is honestly pretty forgivable, and I think he otherwise handles things well.  Now, the wait for the inevitable Mando to go with him begins.

Thanks to my sponsors at All Time Toys for setting me up with this figure for review.  If you’re looking for cool toys both old and new, please check out their website. 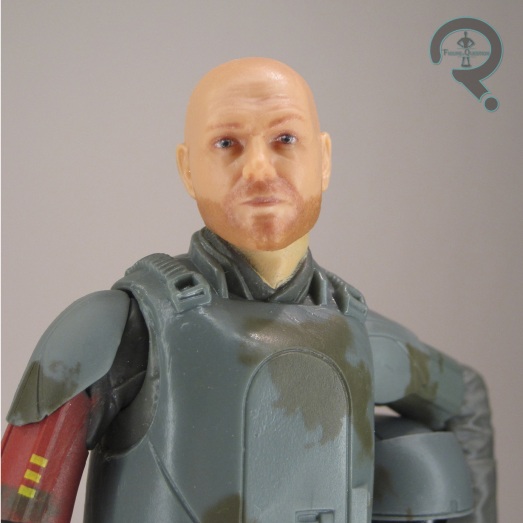