“One of the most fearsome and capable bounty hunters in the galaxy, Boba Fett seemingly met his demise in the Sarlacc pit. A survivor, Fett lived to fight another day”

I last discussed Boba Fett just over a year ago.  I mean, on the site.  I’ve discussed him elsewhere more recently than that.  I mean, I think.  I don’t have a photographic memory of when I’m talking Boba Fett, or anything like that.  Hang on, I’m getting kind of lost in my own intro.  Let’s re-center.  Right, so when I was last discussing Boba Fett here on the site, I talked about how The Mandalorian had finally given the character something to do after thirty years of him just sort of sitting around.  Did this please his fans?  To be short: not really.  But it’s okay, he had his own show on the horizon!  That had to make them happy, right?  Cuz, you know, he gets to be a bad-ass, like the movies implied he was but never actually showed?  And, like, he gets, like character growth and stuff?  No, they don’t like that.  Too much focus on Boba Fett.  So, the show takes a breather from Boba, focuses on others.  That makes it better, right?  Still going with no, apparently.  Well, I guess we should all just pack it in at this point.  Hey, at least I got this new toy. 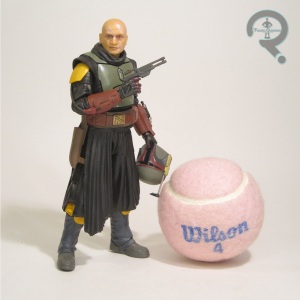 Boba Fett (Throne Room) is a Deluxe-sized Black Series offering, as part of Phase IV of the line.  He, like all of the deluxes, is a solo release, but he’s also meant to tie in with the handful of other Book of Boba Fett offerings, which started hitting in the last month or so.  There are a number of potential Fett variants spinning out of his reappearance on The Mandalorian and follow up in Book.  This particular figure is based on his “Throne Room” look, from the post-credits-scene of Mando Season 2, after he’s regained his armor and had it repainted, but before he goes through the bacta treatments in his own show.  The figure stands about 6 inches tall and he has 31 points of articulation.  Boba’s articulation scheme models itself on the improved style we saw with the last Deluxe Fett, although obviously slightly tweaked to be more practical with the new design.  Given that the new design is rather bulky, I was surprised by how much range some of the joints on this figure got, but I certainly won’t knock it.  We’re a far cry away from the Rogue One days, that’s for sure.  Boba is a mix of old and new pieces, as well as having a number of pieces that are designed for being shared.  The helmet and gauntlets are reused from the RotJ release from last year, while the head and parts of the legs are shared with the robed version of Boba from the main assortment that ties in with this guy’s release.  The rest is all-new, though, it’s worth noting that everything about this figure is getting at least one re-use, for the pre-repaint version of the armor from “The Tragedy.”  Whatever the source of the parts, they certainly work well.  Everything meshes well together, and it replicates his show design quite nicely, while also maintaining functionality as a figure.  The helmet may be the same as the Jedi version, but

this time around it’s designed to be removable, and has even been modified to have an extra piece on the interior to make it sit a little better on this figure’s head.  The underlying head has a passable likeness of Morrison, albeit the heavily scarred version from The Mandalorian.  Honestly, the scarring helps to hide any weaknesses of the likeness a little bit, so it works in their favor a bit.  While I’d had issues with the prior helmet coming out of the package a little misshapen, this one was just fine right out the box, likely due to it not being packaged on his head.  Boba’s color work is fairly decent; it’s more basic, since it’s his much more cleaned up appearance, but it makes him far more bold and striking.  The work on the face is a bit more subtle, which is nice, and it adds to the overall lifelike quality of the figure.  Boba is packed with his jetpack (with removable rocket), a rifle, and a small blaster pistol.  It feels kind of light, given his deluxe status, but I guess that’s going more towards the overall depth of construction more than it is quantity of accessories.  Plus, there’s that whole business of Hasbro knowing with absolute certainty that people will always by Boba, even at a higher price point.  Can’t really fault them for playing the game, I suppose.

I really liked the last version of Fett.  It was a very fun release, and a great starting point for future versions of the character.  I also really enjoyed his updated appearance in The Mandalorian, and that was the main thing I wanted to see following the OT update.  This figure turned out really nicely.  He’s got a hefty price tag, but ultimately, he still feels worth it.  He’s just a lot of fun, and that’s what a good Boba Fett needs to be.