“Jane Foster’s life is forever changed when she mysteriously comes to possess the hammer Mjolnir…and the power of the Mighty Thor!”

In two weeks time, Thor: Love and Thunder, the fourth installment in the MCU’s Thor franchise, hits theatres.  One of the film’s earliest selling points was the return of Natalie Portman in the role of Jane Foster, as well as the confirmation that the film would be adapting her time in the role of Thor from the comics.  The MCU hasn’t really touched on the whole concept of other people taking on the mantle of Thor the way the comics had by the point Jane took over, so it’ll be interesting how exactly they handle it on screen.  It’s not like it’s a terribly confusing concept, though, and with Taika Waititi at the helm, I’m sure there will be some humorous quipping about the exact ins and outs of it in the final film.  Whatever the case, there are toys, and where there are toys, there is me, reviewing the toys.  Well, some of the time.  I mean, I don’t buy *everything*.  But I did buy this, so I’m gonna review it!

Mighty Thor is figure 1 in the Korg Series of Marvel Legends, which serves as the tie-in assortment for Love and Thunder.  It’s an assortment entirely based on the movie, which seems to have become the norm after years of mixing MCU and comics stuff.  Jane is seen here in what I can only assume will be her main attire from the film.  It’s a pretty solid recreation of the design she sported in the comics, with the necessary adjustments for it being on a real person and all, as well as tying her in a little more closely with the prior cinematic Thor designs. The figure stands just shy of 6 inches tall and she has 30 points of articulation.  As with most recent releases, she has the pinless joint construction on her elbows and knees, allowing for a generally sleeker design.  Jane Thor’s sculpt is an all-new offering.  It appears to be a pretty accurate rendition of the movie design, going by what we’ve seen so far.  The detailing is generally pretty sharp, though there are a few soft spots on a couple of the armored parts.  I quite like how the cape has turned out.  There’s a really convincing drape to it, especially given it’s heavier rubber construction.  Jane Thor includes two different heads; one with helmet, and one without.  The helmeted look feels just a touch goony looking; it’s something about how the eyes and mouth work within the context of the whole assembly.  It’s not too terrible, though.  The unmasked head is sporting a respectable likeness of Natalie Portman, 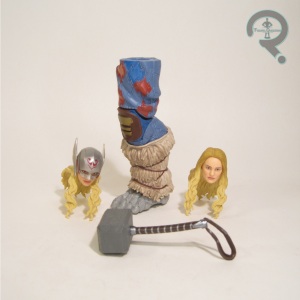 certainly on par with the Padme from a few years ago at the very least.  Jane Thor’s color work is at best described as the bare minimum.  Well, okay, it probably goes a little bit beyond that, to her credit.  There aren’t any obviously missing details, but there’s also very little in the way of accenting.  It’s especially notable on the silver section, where some of the sculpted detailing winds up a little lost.  That said, the application is all rather clean, and the face printing makes her look sufficiently lifelike, as per usual.  Jane Thor includes Mjolnir and the right leg of the Korg Build-A-Figure.  Mjolnir is an all-new sculpt, showcasing its reassembled nature in the film.  Interestingly, it’s a larger size than the ones we’ve gotten with standard Thor (and Cap for that matter), making it our third different scaling for Mjolnir within the line.

I myself only had a somewhat passing familiarity with Jane’s time as Thor in the comics, but Jess was a huge fan, and collected the whole run, up through its end.  I know she would have been thrilled about it getting adapted, so that’s kind of translated to me being excited about it too.  I’m hoping that actually giving Natalie Portman a little bit more to do in the role might make her a slightly more compelling character.  The figure’s at least a promising start.  While I’d have liked to see them be a little more in depth with some of the paint, she’s otherwise a pretty solid release, and thus far looks to be the star of the assortment, at least as far as the general public is concerned. 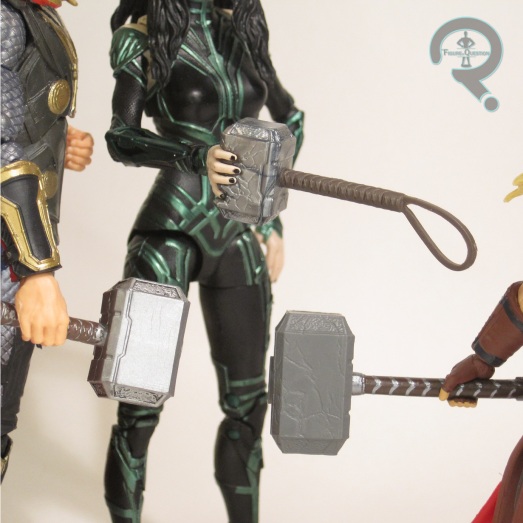