“The villainous cyborg known only as Bonebreaker desires nothing more than the chance to wreak havoc. Employing his robotic abilities first as a mercenary and then as a member of the nefarious Reavers, Bonebreaker leaves a trail of destruction wherever his travels lead him!”

Back in 2019, Hasbro knocked out their first member of the cybernetically-enhanced X-Men foes the Reavers with Skullbuster, an admittedly soft opening for the line-up.  But, that’s what you get when you really don’t have the name recognition to justify much new tooling right out of the gate.  We also got the team’s two different leaders, Donald Pierce and Lady Deathstrike, though the actual ranks are still rather small.  And hey, now we’re getting arguably the most quickly recognizable member of the group, by nature of being half-man-half-tank.  Let’s check out Bonebreaker!

Bonebreaker is the Build-A-Figure for the titular series of Marvel Legends, assembled from the parts included with six of the seven figures in the assortment.  This is Bonebreaker’s second time in figure form, following up on the original Toy Biz one.  Hey, it’s better than all of the rest of his team, so that certainly counts for something.  The figure is about 6 1/2 inches tall and has 18 points of articulation, as well as a moving cannon and back-flap on the tank portion of the figure.  The proper articulation is confined to the upper half, which is making use of the upper portion of the Spider-UK body.  He also gets the bands from Captain Marvel, as well as a new head, overlay for the web gear and collar piece, and, of course, the tank half.  The new pieces are actually pretty impressive.  The head’s got a ton of character, between both the hair style and the crazy look on his face.  I especially like the hinged sunglasses, which add a lot of options for the character’s expressions.  The tank section is generally pretty solid as well.  The detailing is sharp and well-handled technically, and I really dig the dings and scratches.  The assembly is also pretty solid, considering how its got to be disassembled for the purposes of the Build-A-Figure set-up.  Bonebreaker’s color work is on the drab side, as expected, but there’s a lot going on, which keeps it interesting.  Bonebreaker is packed with two sets of hands (fists and gripping), as well as an assault rifle.  It covers everything he could need, and then some, so that’s a plus.

Back in the ’90s, I remember seeing Bonebreaker’s original figure everywhere, which sort of wound up deterring me from actually getting it, until I finally broke back in 2019 and finally got him.  Over the years, I’ve grown to like Bonebreaker a little bit more, and I was certainly intrigued by the prospect of him in Legends form, and this Build-A-Figure release looked pretty awesome when it was shown off.  In-hand, he turned out really well.  Clearly, a lot of fun was had with this one.  I’d love to see them tackle more of the Reavers to fill things out a bit, because they did really well with this one.

This assortment is really oddball, and generally pretty obscure, but boy do I like it.  Obviously, Havok’s the main star for me, because it’s Havok, and he’s great.  That said, Maggot and Bonebreaker are both really well handled figures of low-tier characters, who are just a ton of fun.  Darwin, Siryn, and Sabretooth are all rather by the numbers, but they do what they need to, and they do it well.  And you don’t even need to buy the Wolverine variant to finish the set!  Oh, right, there’s also Vulcan.  I mean, I guess he’s alright. 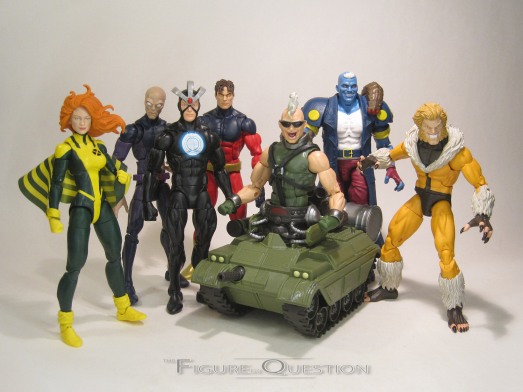