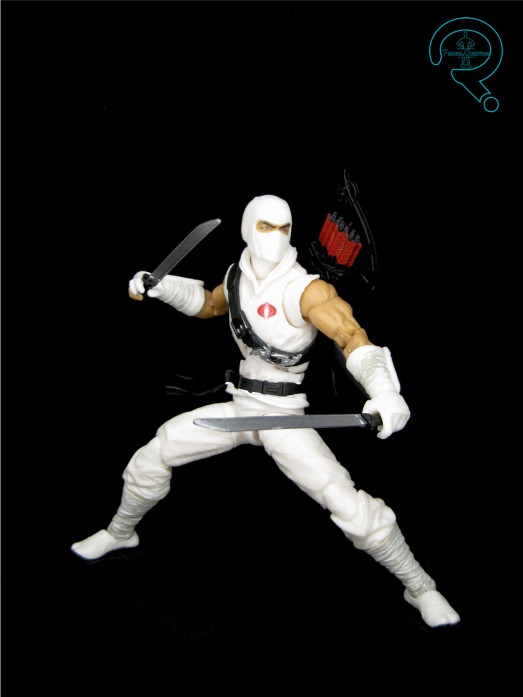 Okay, how long has it been since I reviewed G.I. Joe? Probably a while. I feel like it’s been a while. Has it been a while? It’s probably been a while. I could check. But, I kind of don’t want to. I get lazy like that. Anyway, the point is I’m going to review some more G.I. Joe today. At the beginning of the line, Classified Series kicked off with a deluxe version of G.I.Joe’s main ninja guy Snake Eyes. The first version of his nemesis, Cobra’s equivalent, Storm Shadow, was a was A) a wonky variant and B) an exclusive. The second version was based on the movie and the less said about that, the better. Three years into the line, we’re finally getting a proper version of Storm Shadow. I am looking at that figure today.

Storm Shadow is figure 35 in the line-up of Hasbro’s G.I. Joe: Classified Series.  He’s numerically the first figure in the second assortment of the line for 2022, and picks up right from the last assortment’s Alley Viper on the numbering.  The figure stands just over 6 inches tall and he has 37 points of articulation.  The overall set-up of the articulation is the same as the rest of the line, but with the added caveat of adding the pinless construction, which works especially well with the bare-armed look that this figure has.  The sculpt is all-new, and is clearly based on Storm Shadow’s V1 release.  It’s his classic look, and the one we’ve all been waiting for, so it’s logical.  As we’ve been seeing more and more as the line moves forward, Storm Shadow’s new design adheres quite closely to the old.  There are some slight adjustments, and a few modernizations and extra details added for the larger scaling, but he really is just a straight upgrade to the original look, rather than a re-imagining like the earlier figures in the line.  The biggest change

to this design is the presence of a hood (something that became a lot more common place for the character after the V1 figure), and even that is completely removable, should you want him to be more spot-on with his reference.  The sculpt is a very nice one.  It’s sleek where it needs to be, functional where it needs to be, and has a lot of texturing and small detail work going on, which really makes it nice and visually interesting.  The proportions are quite nicely balanced, and I really like how naturally his clothing hangs on his body; it actually looks like there’s a person beneath all of that ninja gear.  Storm Shadow’s color work is generally pretty solid.  There’s a lot of molded colors, and not a huge amount of accenting, but what’s there is cleanly applied.  The eyes are printed, which looks really good on this figure.  Storm Shadow is packed with two different versions of his hood (up and down), two swords, a bow (which is different from the Arctic version), an arrow, and a quiver (with sheaths for the swords).  The swords, bow, and the arrows (both the loose one and the ones sculpted into the quiver) all get some paint apps, which is always nice to see.

This figure’s been pretty much inevitable since the line launched, but he definitely took his sweet time getting to us. The arctic version was a nice way of tiding us over until the real thing, but he was at best just a place holder. Still, with him being as good a figure as he was, there was certainly some worry that this one might not fully measure up. Well, thankfully, he not only measures up, he manages to blow that release out of the water, and showcase how much Hasbro can up their own game even in a short span of time.