“Clone Troopers train for combat on the planet Kamino. Kamino is not only the place where the clone troopers are engineered, it is also where they are trained in battle tactics, fighting techniques and explosives. Seasoned clone troopers push the cadets hard to turn them into the toughest and most skilled soldiers in the galaxy.”

The success of Star Wars: The Clone Wars comes from how well they humanized the clone forces of the Republic.  Previous, just a sea of identical cannon fodder, the show went out of its way to name them and give them each a unique personality.  It also gave them plenty of stock for all sorts of Clone Trooper figure variants of all those cool named Clones.  Today, I’m looking at one of those clones, who specifically has a penchant for blasting.  Without further ado, let’s look at Hardcase!

Clone Trooper Hardcase was part of the 2012 “Republic Troopers” Movie Heroes boxed set, under the overall Star Wars: The Clone Wars banner.  The other two clones in the set, were Cutup and the Bomb Squad Trooper.  The figure stands about 3 3/4 inches tall and he has 16 points of articulation.  Hardcase made use of the second major Clone Trooper base body for the line.  This one placed priority on capturing the animation style, rather than full articulation like the earlier base body.  Both bases have the pluses and minuses.  I do quite like how this one looks, but it’s certainly not going to be pulling off the same level of posing as the earlier mold.  Still, there’s plenty of posing to be had with it, more than the early non-Clone figures, even, and it definitely captures the look of the clones in the show very nicely.  Hardcase’s main change-up is the paint scheme.  He’s largely white, but he’s got some nifty blue detailing, matching up with his design in the show.  The application is nicely handled, and there’s even a little bit of simulated weathering to really make it look worn-in.  Hardase is packed with a large blaster rifle, which itself was on its second main sculpt by this time in the line.

By the time this set was released, I was pretty much out of Clone Wars figures in their first run.  But, over the years, I’ve been keeping my eye out for cool Clones as I’ve been able to get ahold of them.  Hardcase wound up getting traded into All Time loose shortly after I started working their full-time, and he wound up being one of my earliest grabs as I was processing the collection.  He’s just the basic clone with some new painted details, but you know what, it’s a good formula, and it made for a lot of really cool figures. 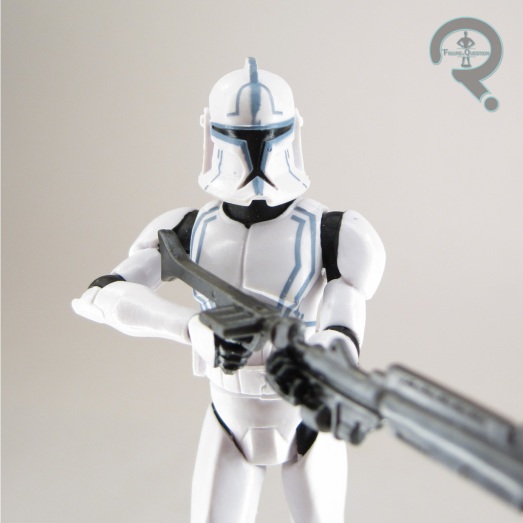