“It was pure chance that granted Richard Rider his fragment of the cosmic power known as the Nova Force. He was just some smart-​aleck kid from Queens, dreaming the same other big dreams as everyone else. The closest he’d ever been to being a superhero was seeing the Avengers’ Quinjet once in a while. Since the day he felt that first rush of power, he’s traveled the universe and battled against and alongside some of the most powerful creatures in the known universe. He has turned back the aggression of entire star empires, and become the last survivor of an annihilated culture. His power enhanced by the absorption of the entire Nova Force and the Xandorian Worldmind, he serves now as a final bulwark against perhaps the greatest threat our universe has ever faced.”

Well, that’s quite a thorough selection of bio-text up there.  I guess…I guess I don’t really need to get into it too much, then.  Well, I suppose I could discuss the out-of-universe stuff, then.  The success of Spider-Man in 1962 was somewhat unexpected.  For the decades that followed, Marvel was kind of always trying to craft that next Spider-Man.  Admittedly, it’s kind of hard to purposefully create an equivalent for a character that didn’t really originate with that purpose in mind.  A decade after Spider-Man’s creation, they tried this with Nova, an admittedly noble attempt at aping Spidey’s success, right down to him being a reimagining of a pet character that Marv Wolfman had made up for a fanzine, mirroring Stan Lee’s own fostering of Spidey before he actually made it to publish.  Though they gave it an honest try, but he ultimately didn’t take off, and he fell into obscurity until the early ’90s when he was added to the cast of the New Warriors.  Nova got his first Legends release, which was his second figure overall, early in Hasbro’s run, and I’m taking a look at that figure today. 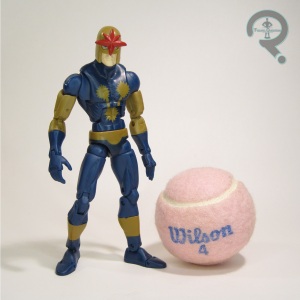 Nova was released in 2009 as part of the Nemesis Series of Marvel Legends.  The Nemesis Series, which wound up being the last assortment of Hasbro’s first run of Marvel Legends, had a turbulent path to release.  Originally, it was supposed to be a mass-release assortment, slated to hit in 2008, but there were production issues associated with it, and a bunch of planned exclusive assortments got pushed up first.  The line-up got tweaked and shifted around several times, and then it looked like it was cancelled entirely, but then, at the end of 2009, the set just started showing up at Walmarts, apparently as an exclusive, effectively pushed out to wrap up the line before the full switch to Marvel Universe occurred.  It was a mess.  Nova was based on his classic design, which was amusing at the time, since he’d just gotten a new look in the comics.  This is still my preferred, so I never really minded.  The figure stands just over 6 inches tall and he has 40 points of articulation.  Nova was built on the modified base-body version of the Bullseye body, first seen with Havok.  It was a good piece when it first dropped, and even in 2009 it was still holding up okay.  I mean, it was still in use for another 6 years after this, so clearly it still had a little bit of mileage left.  It’s a little goofy by today’s standards, especially given how the articulation has been worked into the overall sculpt.  His only new piece on this release was his head sculpt.  It matches well with the style of the base body, and doesn’t do a bad job of adapting the helmet design from the comics.  For proper accuracy, he probably should have a few other unique pieces, but it was the best we could hope for at the time.  The figure’s paint work isn’t great, really.  The big issue is the “gold,” which is really dull, far too dark, and just generally doesn’t pop the way it should.  In general, it’s just a super drab figure, just across the board.  Nova’s only extra was the leg to the Nemesis Build-A-Figure.

This assortment wound up hitting at the same time as the Walmart-exclusive 10th Series of DC Universe Classics.  At the time, my Dad was scouting out the DCUC figures for me and my brother, and he happened upon a few of the figures from this set, so he started scouting out those as well.  He and I wound up finding this one together, while on a run for some Christmas decorations.  He’s not a great figure, but I was happy to have him at the time, and I appreciate the story behind it.