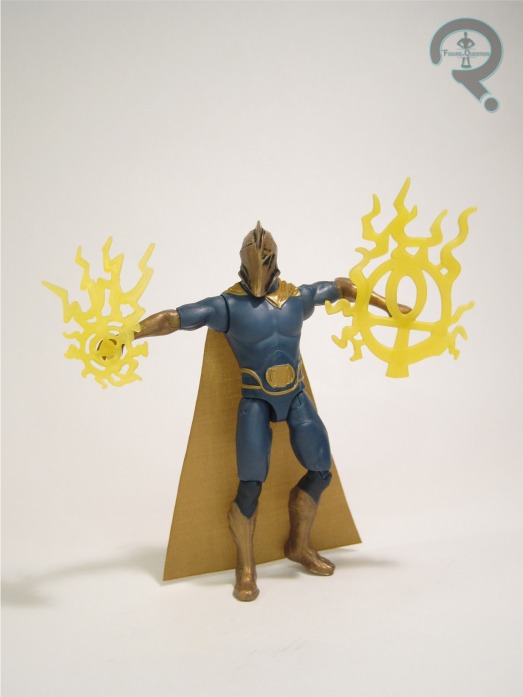 In the bleak landscape that is the current state of the DC live action movies, there stands one un-cancelled, un-delayed film.  That film is Black Adam, the Dwayne “The Rock” Johnson-led spin-off of Shazam!  DC’s really banking on this one, and kinda banking on Black Adam a lot as a character right now.  I’m iffy on the whole prospect, really, but we’ll see how it goes.  To fill in the movie’s cast a bit, Black Adam is joined in his first cinematic venture by a small contingent of the Justice Society of America.  Pierce Brosnan is playing Doctor Fate, and I’m honestly not hating that, so when it comes to the tie-in toys, that’s what I’m hitting up to start.  I mean, Doctor Fate, right?

Dr Fate is part of the first assortment of basic figures from Spin Master’s Black Adam line.  As with their The Batman tie-in line, its an off-shoot of the main 3 3/4 inch DC line, so he can work with those figures as well.  The figure stands about 3 3/4 inches tall and he has 17 points of articulation.  He’s got the same basic articulation scheme as the rest of the line, though they’ve slightly changed up how the hips work, and it’s not quite as effective.  Beyond that, though, it works pretty decently given the scaling and size.  The figure’s got an all-new sculpt, which is loosely based on the film design for the character.  I say loosely because he’s clearly based on some sort of preliminary design for the character, as there are a fair number of details that don’t quite line up with the final film look.  The helmet is probably the closest piece (which tracks, since it looks like the helmet was actually a physical prop during filming), and it’s a pretty strong piece.  The body, especially the collar and belt, are off for sure.  I don’t think they look bad; they’re just inaccurate.  The actual quality of the sculpt is pretty solid; his proportions are more balanced than previous figures, so he’s not quite as ridiculously buff.  It works better for Fate, so I dig it.  The cape is a cloth piece; it’s that same papery cloth from before, but it’s at least lacking that hole in the back that most of the Bat-figures had.  The figure’s paint work is decent enough.  The helmet’s even got some pretty nifty accenting, so that’s cool.  There’s a bit of a color match issue on the blues on the legs, but otherwise he looks alright.  Certainly on par with the rest of these figures.  Dr Fate is packed with two magic effect pieces, which he can hold in his hands.  They’re honestly pretty cool.

I’m skeptical about this movie, but I’m not skeptical about a cool Dr Fate figure. I’m not lining up to throw more money at McFarlane, so I was pretty happy to hear that Spin Master had their own line running.  I’ve only been seeing the Black Adam figure thus far, but I was out running errands the other day, and happened up this guy and jumped on it.  He’s not film accurate, but he’s still a lot of fun.  If I can just find that Atom Smasher figure, I’ll be all set. 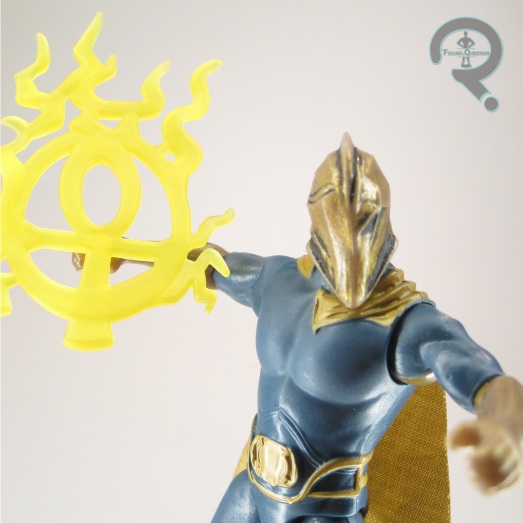