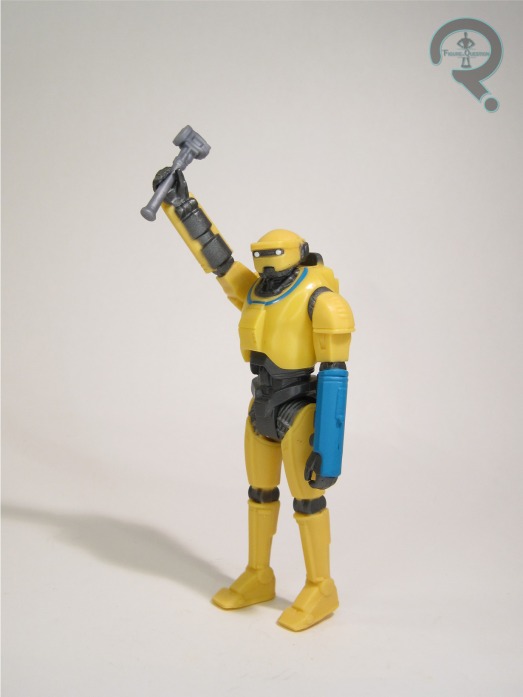 Star Wars sure does have a lot of really cool droids.  And, with each successive addition to the franchise, we get a few more really cool droids.  Hey, if they sell, you gotta make more of them, right?  Kenobi had two such droids.  Lola was the one that got the early lead-in promotion for the show, but the one that really seemed to stick out in the show proper was the non-verbal NED-B, a big, lumbering droid that works with the Rebellion in its early days.  So, let’s have a look at a figure of NED-B.

NED-B is the final figure in the six figure line-up for the Kenobi tie-in series of Hasbro’s Star Wars: Retro Collection.  He’s unique in this series as the only character who’s making his figure debut here, though he’ll be getting a Black Series release early next year.  The figure is the tallest of the figures in this assortment, standing 4 1/4 inches tall and he has 5 points of articulation.  The sculpt is totally new to this release.  Of all the figures in the assortment, this guy feels the least like a proper vintage figure.  There’s just something about the exact sculpting and styling that winds up feeling just a little bit too advanced for the original run.  It’s not bad, and it’s not so drastic that he feels out of place with the rest of the line-up, but it’s notable.  If anything, he feels maybe a bit more on par with something more of the ’90s era, almost like he’s just a bit more of a progression than the other figures.  He certainly captures the spirit of the character, though, and the detailing is all pretty solid.  He’s obviously dialed back a bit from what we see on the screen, but enough of him remains to sell which character it’s supposed to be.  The paint work on this figure is similar to the sculpting in that it’s not bad, but it’s also a bit more advanced than it *should* be for the line.  It certainly does look nice, though, and I appreciate the bright colors on him, especially in comparison the the generally drab colors of the other five figures.  I also kind of dig that they’ve painted sections that wouldn’t really be painted on the vintage versions, as it just ends up making him feel a little bit more finished than he might otherwise.  NED is packed with his hammer, which is a pretty solid extra for him, given its key role in a few of his scenes.

NED is far and away the figure I wanted the most from this series.  I just really dug his design on the show, and I wanted him in figure form.  He’s interesting, because he at once feels like he’s a natural for this style, and also just a bit too removed for a clean translation.  He’s a bit like Grogu from the first assortment, where he may not quite land the vintage feel, but he’s still a really fun version of the character, so I can’t ultimately complain.  And, like that figure, NED here just makes for a good toy.