“Uncomfortable with her wealthy birthright, rebellious Kate Bishop’s well-meaning determination sets her on a collision course with her Super Hero idol, Hawkeye.”

Initially introduced in the pages of Young Avengers, Kate Bishop became the second Hawkeye when granted the title by Captain America, who passed it to her during a period when Clint Barton was dead.  When Barton inevitably returned to the land of the living, he initially attempted to take the title back, but ultimately agreed to share, and it was brought to the forefront for Fraction and Aja’s run on Hawkeye, which placed Kate as a deuteragonist. Disney+’s Hawkeye show followed suit, and introduced Kate into the MCU as Clint’s successor to the mantle of Hawkeye.  And, in the process, she even got her second ever action figure, which I’m taking a look at today!

Kate Bishop is figure 4 in the the Infinity Ultron Series of Marvel Legends, where she’s the second of the two Hawkeye figures.  This marks Kate’s second time in Legends form, following up on the multi-pack release for her comics counterpart from 2016.  Like the Clint figure, Kate’s seen here in her finale attire, which seems inspired by her earlier Young Avengers gear.  The figure stands about 6 inches tall and she has 31 points of articulation.  Her movement scheme is actually pretty solid.  She gets butterfly shoulders, which we pretty much never see on female figures, but are a great help on the archery poses.  And, in contrast to Clint, she gets a ball-jointed mid-torso joint.  It doesn’t offer quite as much forward and back as the ab-crunch, but it has side-to-side movement, which offers a good deal more variety to her posing.  She’s got the pinless construction for the elbows and knees as well, which adds to her feeling of advanced motion.  Kate’s sculpt is an all-new one, done by sculptor Eddie Mosqueda Jr.  The sculpt is a pretty strong one overall.  The head’s not *quite* a spot-on likeness for Hailey Steinfeld; the face is perhaps a touch too thin, I think; however, it’s close enough that the context sells who it’s supposed to be.  The body sculpt does a 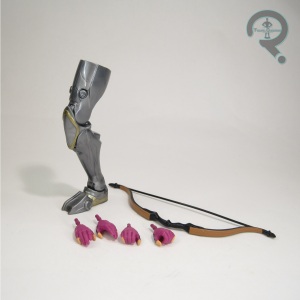 rather nice job of capturing Kate’s adventuring gear from the show, with all of its differing textures and folds and such. The costume details also match up quite well with her show design, which is always nice to see on the MCU figures; obviously there was a more finalized design to work from here. The body’s proportions are again just a touch skinny for Steinfeld, but they’re far from the ridiculous proportions we’ve seen in the past; she still looks like a real person.  The color work on this figure is generally not bad; the colors seem a little bit more saturated on the figure than they were in the show, but it’s more than likely it’s a lighting thing.  It’s also a lot of purple, which always looks way different in photos than in person.  The paint application all looks decent enough; there’s a few small spots of slop, but nothing major, and the face printing is on point as always.  Kate is packed with two sets of hands (gripping and relaxed), her bow, and the left leg of the Infinity Ultron Build-A-Figure.  The hands are notably a different selection than she was initially shown with, which was two fists, and a gripping/open gesture combo.  I’m not entirely sure why this changed, but I honestly prefer what we got, so I don’t mind.

I’ve been following Kate in the comics since her earliest appearances, and I loved what Fraction and Aja did to work her and Clint into a story together.  I was also really happy when she was confirmed for the solo series, and even more so when I heard they’d cast Hailey Steinfeld, who I feel was a great choice for the role.  The show made her one of my favorite new additions to the MCU, and I’ve definitely been looking forward to the figure.  Like Clint, she’s not quite perfect, but she’s still a lot of fun. 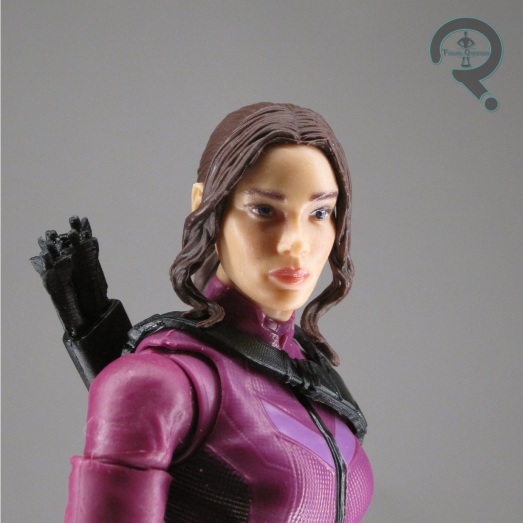