Originally, during A New Hope‘s climactic trench run on the Death Star, the color-coded squadron of pilots joined by Luke was not supposed to be red, as seen in the final film, but blue.  However, when the production realized that the blue-screen effects they were using for the space sequences would result in all of the blue markings on the ships being replaced by the background, the squadron was switched to red, with the intended back-up squadron going from red to gold, and Blue Squadron winding up shelved.  With the advancement of special effects over the years, Blue Squadron has shown back up in other forms, including in Rogue One, where Blue Squadron is more or less wiped out during the final battle on Scarif, thus explaining their absence from A New Hope.  The squadron is lead in the film by Antoc Merrick, who’s a cool dude who got far too little action figure coverage when the original Rogue One product hit.  Have no fear, the second round of product is here!

Antoc Merrick is one of two Target-exclusive Star Wars The Black Series figures released for the Rogue One sub-set from earlier this year.  He is figure 8 in the overall Rogue One line-up, making him the second numerically of the two exclusives.  The figure stands a little bit under 6 inches tall and he has 29 points of articulation.  For the most part, this figure is re-using parts from the original Pilot Luke body (which I reviewed when it was used for Wedge), but he actually swaps out the arms for the ones from the Snowspeeder Pilot Luke, so as to give Antoc his proper gloves.  The Luke body’s technically a touch short for Merrick, whose actor Ben Daniels is closer to 6 feet tall, but given that he’s a much more minor player, I suppose expecting a totally new pilot body just for him is probably a bit much.  It’s at least a decent sculpt, and the alternate arms mix things up a little bit from Luke and Wedge.  He doesn’t get the proper collar piece from the movie, but it’s otherwise fairly accurate, and the collar’s honestly quite minor.  Antoc gets an all-

new head sculpt, which sports a respectable enough likeness of Daniels in the role, although it does seem a little too large for the body.  Antoc’s color work is a nice change of pace for the pilots, since it’s predominantly blue.  The paint work is generally pretty basic, but it’s got some solid application, and the face printing works well.  Antoc is packed with his helmet and a blaster pistol, which have become the standard pilot offerings.  The pistol looks to be the same one included with Luke, while the helmet is, curiously enough, the Snowspeeder version of the mold, which is a bit smaller than the X-Wing version.  It makes getting the piece onto Antoc’s head rather tricky, since the sizing doesn’t work quite right.  It’s at least a very nicely painted piece, and it makes for a decent thing for him to hold.  Given he’s not likely to get an X-Wing to pilot at this scale, having him hold the helmet seems more appropriate anyway, but it’s still odd.

I’ve honestly been hoping for an Antoc Merrick in some form or another since Rogue One hit theatres.  He’s a minor character, but a cool enough one that he caught my attention.  I was always a little bummed that the basic line never got to him.  I wasn’t super thrilled by him being an exclusive, as I’m not really going out of my way to track any of them down these days, but I happened to find him in store right as Target was doing that crazy markdown on all of their figures, so I got him at $12, which is a price that I really couldn’t say no to.  He’s not a game changer or anything, but he’s nifty, and I do like actually having him.  Hey, another pilot for the shelf! 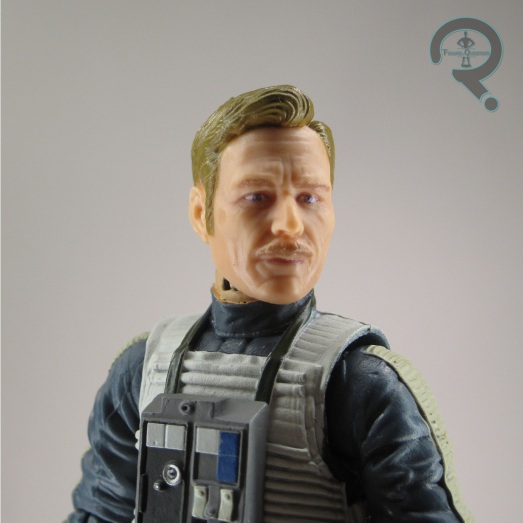