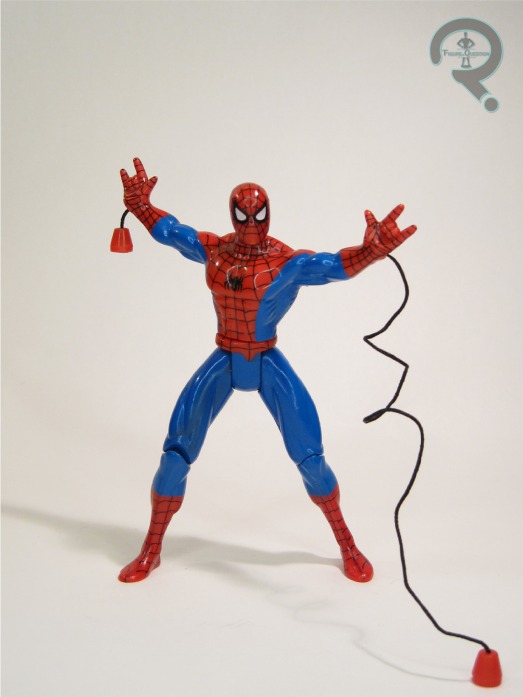 “Fighting super-villains in a big city like New York can take a lot out of a super hero – but not Spider-Man! With a quick double-tap on the shooters, Spider-Man is able to swing across town in mere minutes, giving his foes barely enough time to even THINK about crime!”

When Toy Biz’s tie-in line for Spider-Man: The Animated Series launched, it came with it two variants of the titular character.  They weren’t quite delving into the more prominent Spidey variants just yet, so the two that were present were both decidedly mild, doubling as fairly standard looking Spider-Men as well.  Both figures were dedicated to some variation on Spidey’s web-shooting, with today’s focus specifically honing in on his distinctive web slinging. 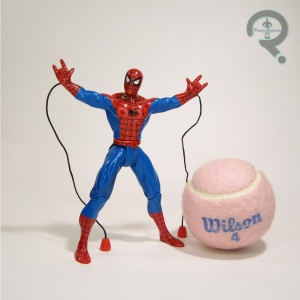 Web-Racer Spider-Man was released in the first series of the Spider-Man: The Animated Series tie-in line.  He sports a standard Spider-Man design, specifically adapting the look from the show, but functionally working as a fairly classic Spidey.  The figure stands about 5 inches tall and he has 6 points of articulation.  The movement on this release was greatly reduced, with the arms permanently held outstretched to facilitate the action feature.  The figure’s sculpt was largely unique to this release.  The only real shared piece was the head, a common part to almost all of the Spideys from this line’s early run.  Lack of mobility aside, the sculpt actually looks pretty solid.  The proportions are quite realistically balanced, and without any shoulder joints, the figure has a nice flow about it.  There’s a

channel sculpted into the arms and torso of the figure, which has a string running though the whole way.  He can be picked up by either side of the the string, and he’ll slide to the other end, appearing to swing or climb.  It’s simple, but it’s not a terrible idea.  Spidey’s paint work is nicely handled.  It’s bright, colorful, and all of the line-work is pretty cleanly handled.  I suppose the webs on the red sections could be a little sharper, but they were consistently placed, and generally looked pretty good.  Spidey included no accessories of his own, but he did get a small plastic Venom pin…for those that need small plastic Venom pins.  Not sure why Spider-Man has a Venom pin, but, hey, there it is.

With Series 1 largely out of stores by the time I started collecting, I didn’t end up with any of them when they were new.  I got to tracking some of them down, but I didn’t exactly have a shortage of standard Spider-Men, so this one was never really high on the list.  This one happened to be a stray figure traded into All Time along with a couple of other Toy Biz figures.  Since I didn’t have him and he was easy to snag, I did just that.  He’s not anything flashy, but he’s a pretty fun little variant.