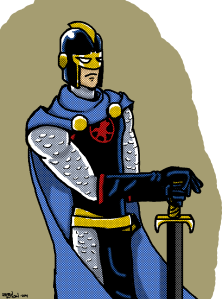 Black Knight is a Marvel Comics legacy character. The first Black Knight was an unrelated character from Arthurian times. Later, the character re-appeared as a member of the Masters of Evil, Baron Zemo’s group of villains formed to fight e Avengers. This Black Knight was Nate Garret, who upon his death left his weapons and gear to his nephew Dane Whitman. Dane decided to right his uncle’s wrongs by becoming a super hero. He joined the Masters of Evil to infiltrate them from the inside, and eventually joined the Avengers. He served as a member for a little while before, among other things, being turned to stone and being sent back in time to replace one of his ancestors. He has returned to the present and now hangs out with fellow British super hero Captain Britain.