“Rather than use flesh-and-blood warriors, the Separatists prefer mindlessly loyal soldiers that are easily controlled. Battle droids are dim-witted and no match for clone troopers or Jedi, but they weren’t designed to be smart – they were designed to overwhelm Republic civilians through sheer numbers, something they do very effectively.”

Since the Stormtroopers were off limits due to timelines and continuity and all that jazz, the Prequel Trilogy had to come up with its own form of armies of troops for the bad guys to throw our heroes’ way.  Taking advantage of being able to do designs and concepts not as easily allowed by the technology of filmmaking in the early ’80s, Lucas and company introduced the Trade Federation’s Battle Droid army, who became the backbone of the separatist forces for the next three films (and Clone Wars, of course), all while some how becoming more comically slapstick in their mannerisms with each subsequent appearance.  At this point, it really wouldn’t be that far-fetched for them to come out with a rendition of “who’s on first?”  Whatever the case, they were absent from The Black Series for a good bit, but finally joined the line early last year.  Of course, the assortment they were a part of was kind of unbalanced in its distribution, so Hasbro opted to give us another chance at the mold, this time with a tweaked color scheme.  Yay for me! 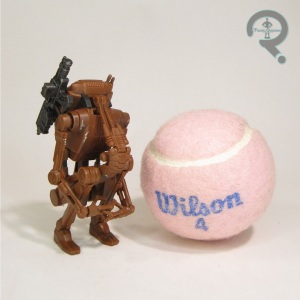 The Battle Droid (Geonosis) is figure 108 in the Black Series line-up.  He’s the third Battle Droid we’ve gotten, following the tan Episode 1 version and the Gaming Greats heavy gunner.  All three of them are the same mold, which is sensible, since the core droid design didn’t change throughout the three prequel films.  The figure stands 6 1/4 inches tall and he has 27 points of articulation.  Battle Droid figures historically have a lot of trouble matching the movement of the droids in the films.  Given that the joints are right there in the design, it’s a shame that they almost never articulate them.  However, this figure addresses that, and actually manages to articulate most of the built-in joints, making this by far the most Battle Droid put out by Hasbro.  The hip joints are slightly limited, and a few of the smaller joints were stuck on mine right out of the box, but he’s overall really posable, and a lot more steady on his feet than prior Battle Droids I’ve messed with.  Most impressively, he can actually properly fold up like the droids do in the movie, which is pretty cool.  The sculpt is also a pretty spot-on recreation of the designs seen in the movie, with all of the detail work being nice and crisp, sharp, and clean.  He’s quite a sleek-looking figure.  The colors are where this figure differentiates himself from the prior releases.  This one uses the Geonosis coloring, so he’s all red to match the rather amber terrain of the planet.  I’ve always been kind of partial to this coloring, so I’m happy to see it represented here.  The paint work gives him some wear and tear, so that he looks like a proper “battle” Droid.  He’s armed with the standard E-5 blaster, and also includes both a backpack, and the streamlined antenna pack, to allow for some distinction of ranks within the set-up.  It would have been cool to also get a C-3PO head to swap out, but perhaps they’ll just make the heads swappable when they make the inevitable AotC 3PO.

I was tempted by the tan release of this figure last year, but never saw him in person, and didn’t feel majorly inclined to track him down after the fact.  Once I knew this one was coming, I officially switched over to just wanting him, because I like this color set better.  Now that I’ve finally gotten to mess with this mold, I can definitely see why people like it so much.  I’m sure Hasbro’s already planning to do a few more rank variants with it, and I can see myself picking some of those up to be sure.

Thanks to my sponsors at All Time Toys for setting me up with this guy for review.  If you’re looking for Black Series, or other toys both old and new, please check out their website and their eBay storefront.

“Clone troopers fight battle droids to destroy a Separatist weapons factory. ARF trooper Waxer scouts ahead to gather information about the enemy. He runs into a squad of battle droids, and stops these robotic warriors before they reveal his position.”

Star Wars: The Clone Wars leaned pretty heavily on its cast of clones, a fitting choice given the title.  In order to actually keep the show interesting, they made a point of giving the clones personalities, in contrast to the fairly mindless squadrons of them we’d seen in the films.  While some of them were just one offs, others were popular enough to get a few appearances under their belts.  My personal favorite pair were Boil and Waxer, a bickering odd couple that first appeared in “Innocents of Ryloth” and would make a handful of other appearances as the show progressed.  Today, I’m looking at my boy Waxer’s second figure from Hasbro’s main toyline, which faced him off against a Battle Droid!

ARF Trooper Waxer and the Battle Droid were released as part of Hasbro’s Clone Wars line as a Target-exclusive two-pack in 2011, hitting alongside a Special Ops Clone Trooper and Geonosian Drone set.  Both pairs were based on the Season 2 episode “Landing at Point Rain.” 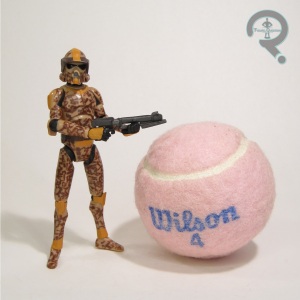 For “Landing at Point Rain,” a good chunk of the clones got new, camouflaged armor.  In the case of Waxer, he actually traded up to the ARF trooper armor, which means he’s got not only a new paint scheme, but also a snazzy new helmet with a rather Biker Scout-inspired look.  The figure stands just shy of 4 inches tall and he has 26 points of articulation.  Waxer’s just a repaint of the standard ARF Trooper from the main line.  I means he doesn’t get a removable helmet like his last figure (to be fair, he never takes it off in this gear anyway), but it also means he’s using the best Clone body that the line put out.  It’s got all the cool stuff of the usual clone body, but also throws a universal joint on the hips in place of the usual cut joints.  While it’s not a pitch perfect articulation set, it’s certainly a very good one, and means it’s really easy to get some good poses out of him.  The actual sculpt is also quite accurate to the animation models, and the helmet in particular is a real thing of beauty.  Waxer’s paintwork is quite involved, since he has to get the Geonosis-style camo, all throughout, which means he’s got some sort of painted detailing pretty much all over.  He also gets his character-specific markings, which match up with his standard armor, with the exception of one new detail: he’s got a little drawing of Numa, the Twi’lek he helped rescue in “Innocents” on the back of his helmet.  This detail was one of the coolest things added in the show, and It’s really awesome that Hasbro remembered to include it here.  Waxer gets a standard DC-15S blaster, plus a D-6 rotary blaster, a firing missile, and a display stand. 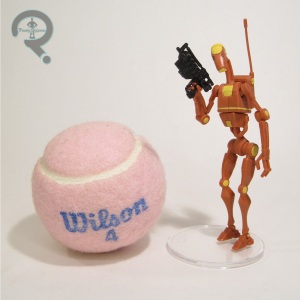 I’ve never been much for the basic Battle Droids, and I felt that one of the best things that Clone Wars did was introduce the likes of the Commando Droids in order to shift the focus a bit.  Because of this, I never got any of the standard Battle Droids.  But, this one was packed with Waxer, so I guess I had to get him.  The figure stands 4 inches tall and he has…okay hang on, I have to amend the first part first part: he’s 4 inches tall.  He doesn’t do much standing, which is my first big issue with the guy.  He simply can’t stand without something to hold him up.  He’s got 8 points of articulation, which is my next thing.  The arms on this guy are great…and that’s about it when it comes to the articulation.  Despite all those obvious joints being there in the design, they aren’t articulated for the most part.  The legs in particular are bad, because they just get the cut joints at the hips, and nothing more.  That certainly doesn’t help with the issues of standing.  Also not helping is the fact that this guy is just warped all over the place.  His legs, his neck, even his forearms are all warped out of their proper shaping, and he came out of the box that way.  At the very least, the sculpt looks like what it’s supposed to, so he’s got that going for him.  The Battle Droid’s coloring is the darker Geonosis shading, which honestly looks a bit better in general.  He’s got yellow markings, which I believe makes him a Commander.  Good for him, I guess.  He’s packed with an E-5 blaster (which he can’t hold correctly) and a display stand (not the one pictured, that’s a Pro-Tech stand).

Last summer, All Time got in a pretty heft Clone Wars collection, which was the source of the Assault on Ryloth pack that I picked up and reviewed at the time.  I also grabbed quite a few others, which included this pair which, like so many other Clone Wars releases, I missed when they were first released.  It wasn’t a hard sell, since it’s Waxer, who’s my favorite clone, wearing the ARF armor, which is my favorite armor.  He’s awesome, and I’m glad to have him.  The Battle Droid’s not great, and I remember part of why I didn’t pick any of them up in the first place.  Hey, at least I got Waxer.

As I touched on above,  I got these guys from my friends at All Time Toys.  While the Clone Wars stuff moved pretty fast, they’ve got other cool toys both old and new, so please check out their website and their eBay Store. 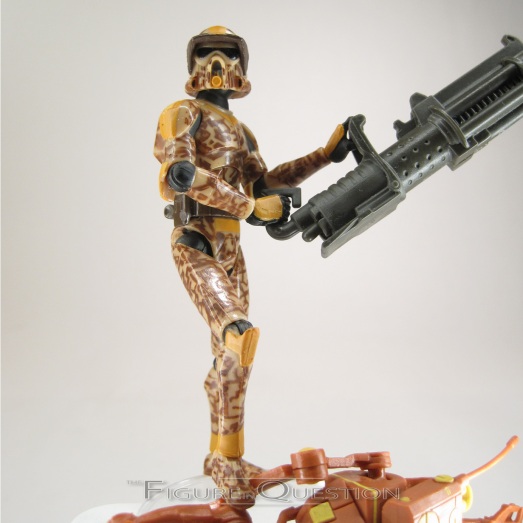