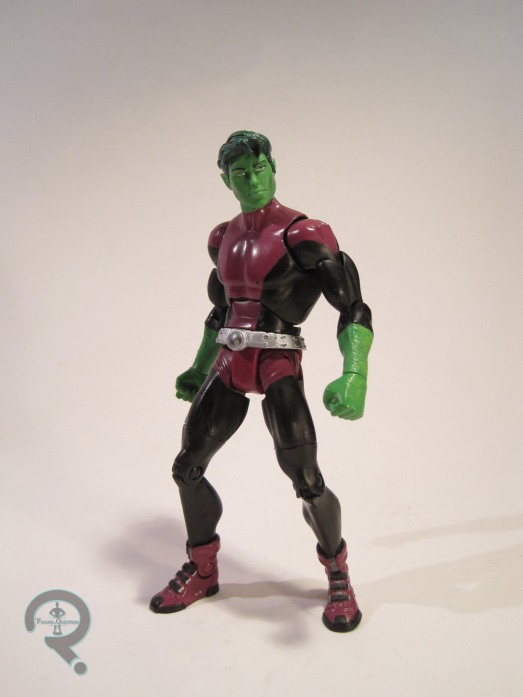 “While traveling to Africa with his scientist parents, Garfield Logan fell victim to a deadly virus and was saved via an experimental treatment that tuned his skin and hair green, in addition to granting him the ability to transform into any animal he imagined. After his parents died in a boating accident, Gar was taken in by the Doom Patrol, a team of misfit heroes that helped him to master his powers.”

It’s kind of odd that his bio mentions the Doom Patrol, but not the Teen Titans.  I’m not complaining, just noting that that’s the way they went.  In regards to DC Universe Classics, I’ve looked at Negative Man, Elasti-Girl, and Robotman.  The only Doom Patrol member they released that I haven’t yet looked at is the aforementioned Beast Boy, adopted son of Elasti-Girl (but we don’t seem to talk about that anymore), and, more prominently, member of the New Teen Titans.

Beast Boy hit in the Walmart-exclusive Series 10 of DC Universe Classics, alongside fellow Doom Patroller Robotman.  The figure stands about 5 1/2 inches tall and has 25 points of articulation.  The sizing on this guy is confusing to say the least.  He’s effectively wearing his costume from the Teen Titans cartoon, which was worked into the comics when Gar rejoined the Doom Patrol after “One Year Later.”  When Gar was wearing this costume in the comics, he was a full-grown adult, but this figure builds him on the small teen male body (introduced on the Series 3 Robin figure), as if he were just the version of BB from the cartoon.  This wouldn’t be a huge issue if the BB-specific parts weren’t clearly meant to be emulating the older Gar from the “One Year Later” storyline, and built with the proportions of an adult.  So, the end result is a Beast Boy that just sort of seems out of scale with just about everything.  I’m fine with Gar being a little smaller than the rest of the Patrol, but a full inch difference seems a little excessive, and he’s actually just flat-out in the wrong scale.  What’s really frustrating is that the actual sculpt really isn’t that bad.  He’s a pretty solid recreation of Gar from this period in the comics, and has a lot of nice little small details, such as the arm hair on his forearms, and even the really sharp work on his shoes.  The hair is a separate piece, which makes its contrast really sharp, and the ears even have the point they gained in later designs.  It’s clear a lot of effort went into this sculpt; he’s simply too small.  The figure’s paint is pretty solid, at least; the colors are a good match for both the comic and the cartoon, and everything is applied pretty cleanly.  There’s not a lot to mess up here, and Mattel succeeded in not messing it up.  Good for them.  Beast Boy included a green falcon (re-used from the MotUC line), meant to emulate his shape-shifting abilities, as well as the right arm of the series’ Collect-N-Connect, Imperiex.  Woo.

Beast Boy is one of the earlier figures I got from this series.  Just after it started hitting Walmart, my dad and I had a few trips just checking our local stores, and he was one of the ones we found.  I’ve always liked Beast Boy, and at the time I was super pumped about getting the Doom Patrol as action figures.  I can acknowledge some of this figure’s merit, and I certainly don’t hate him, but he disappoints me greatly.  He’s kind of a perfect example of DCUC in a nutshell; great in theory, and in 95% of the execution, but there was just enough leeway for Mattel to find a way to screw him up.  They were so close, and yet still so far. 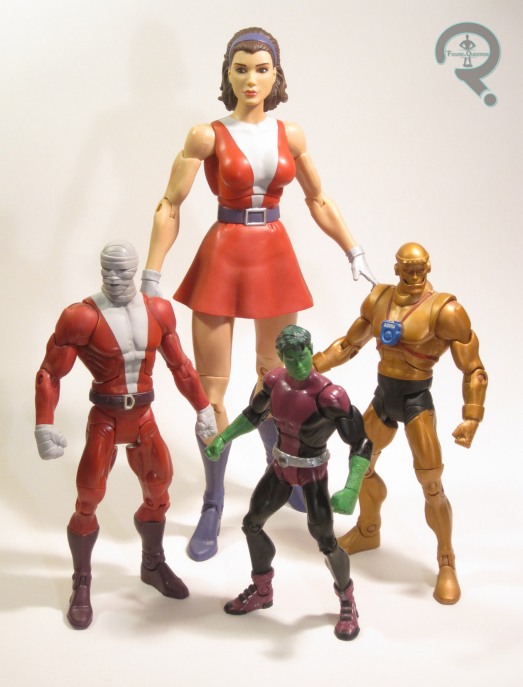 Keeping with the theme of cartoon adaptation toy lines from two days ago, I’ll be looking at two of the figures from Bandai’s Teen Titans Go! toy line, released to coincide with the Cartoon Network Teen Titans show.   The figures were released packaged with large, nonsensical vehicles, or packaged in two-packs.  I opted for the second option.  Today, I’ll be looking at the basic versions of Robin and Beast Boy.

This two-pack was released as part of the first series of figures in Bandai’s 3 ½ inch line.

First up is the team leader, sidekick to Batman, Robin.  Robin is based on his look from the show.  He stands 3 ½ inches tall and features 9 points of articulation.  I feel it’s necessary to point out that this line was NOT 3 ½ inch scale, but rather every character was exactly 3 ½ inches tall.  It’s fine for the two I’m looking at today, but it will quickly become an issue.   Robin is a decent sculpt, but not the greatest.  The arms have been sculpted to hold the handles of the vehicle it was possible to purchase him with, making them awkward if you bought his separately like I did.  The legs also have a wide stance, and seem to be a tad long and definitely too bulky.  To top it all off, the head is passable at best, but certainly looks off in comparison to the show’s design.  The paint is okay, but there is a fair amount of overspray and fuzzy lines.  As you’ll notice, the paint was also not the most durable variety, with lots of the details scratched off with very little play. 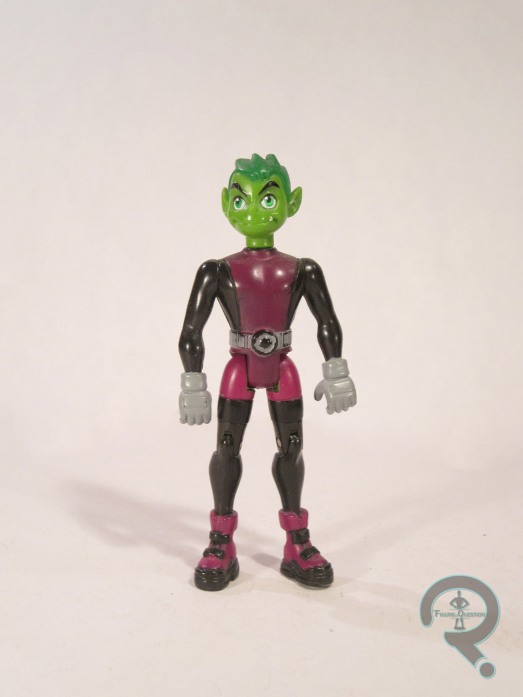 Next is the team’s resident funny-man, Beast Boy.  Like Robin, he’s based on his look from the show.  He too stands 3 ½ inches tall and had 9 points of articulation.  He’s got an okay sculpt, but he’s definitely too tall, and his head is too small for his look from the show.  He has the same issue with the oddly positioned arms, and legs that aren’t the right proportion.  The paint on Beast Boy is a bit rougher than Robin, with even more noticeable slop, and a whole lot more wear, with very light play.  Also, the two different purple paints don’t really match very well.

These guys were found on an excursion to Toys R Us with my Mom (who is super awesome, and super supportive of my insane hobby).  I recall being really excited to get them at the time, as there was a bit of a delay from the show’s premiere to the release of the toys.  I remember liking them at the time, but as time has gone by, I’ve started to see the flaws more and more.  The line did improve a bit, but man was this first wave a rough one!