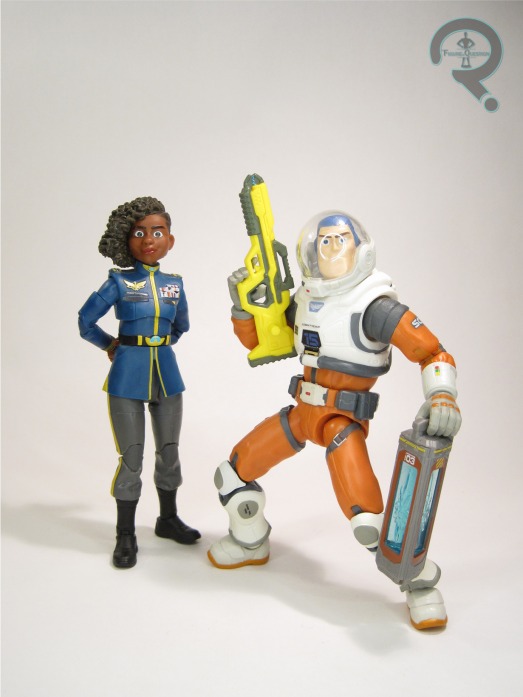 For their summer offering this year, Pixar went back to the well that is Toy Story, but, having acknowledged that you can only wrap up the franchise’s loose ends so many times before you start to really see diminishing returns, they went a little bit different with things.  In the early 2000s, we got Buzz Lightyear of Star Command, a Saturday morning cartoon that was meant to be the in-universe Saturday morning cartoon that went with the Buzz Lightyear toy from the movies.  In 2022, Pixar asked the question: “what if the cartoon and the toy were both actually based on a movie?”  And then they went ahead and made that movie.  And there was much rejoicing.  No, the other thing.  There was a lot of complaining, actually.  Mostly by people who didn’t, you know, actually see the movie.  But, that’s just our culture at the moment, I guess.  I liked it.  I also bought some toys, because, well, that’s who I am.  And I enjoy the recursiveness of the toys based on a movie based on the toy from a movie, which was in-universe based on a movie.  It’s mind-boggling in just the best possible way.

Alisha Hawthorne and Buzz Lightyear are a Target-exclusive two-pack release, courtesy of Mattel’s Lightyear: Alpha Class line.  There are a handful of different scales in play for the tie-ins, with the Alpha Class stuff being on par with Mattel’s other collector-geared lines, though they’re still definitely toys.

Buzz’s partner at the beginning of the film, Alisha winds up getting a small but very integral to the plot role in the movie.  Over the course of about 20 minutes of the film, we see her live out pretty much her entire life as Buzz checks in with her between his light speed jumps.  This figure is based on her look from about the mid-point of things, when she’s established herself as the commanding officer of their station, and gets the fancy dress uniform to go along with that.  Barring the classic Space Ranger attire, it’s her most distinctive look, and it is very snazzy.  The figure stands just shy of 6 1/2 inches tall and she has 32 points of articulation.  Her movement is about the same as Mattel’s other collector lines, which is to say it’s actually pretty good.  They’re using pinless construction on the elbows and knees, so everything looks pretty slick.  The actual sculpt is unique to this release, and does a fairly respectable job of capturing Alisha’s design from the movie.  I quite like the way the hair turned out, and the uniform is nice and sharp.  Alisha’s paint work is pretty decently handled.  The base work is all very cleanly applied, and there’s some great small detail work on all of her ribbons and medals.  The eyes are perhaps a touch crazy looking, but I think that’s more an adaptation thing, just being one of those design elements that looks fine on screen but ever so slightly off on an actual physical object.  Alisha technically doesn’t really get any accessories, but, it’s honestly hard to say that with absolute certainty.  The stuff included all feels like it *should* go with the other figure, but there’s no reason you can’t share the load.  Product shots showed her with the knife, so I gave her that for the Wilson photo, just so she had something more to do.

As the titular character of the film, Buzz gets a lot of looks over the course of the movie, and pretty much all of those got toys.  Obviously, they’re not going to stick his main Space Ranger gear in an exclusive two-pack, so that’s not what this one gets.  Instead, this one is sporting the suit he does his last jump in, which is what sends him into the film’s “current” time.  It’s kind of an interesting choice, since it means he doesn’t really match up with Alisha, who is out of the story by the time he dawns this gear.  That said, it’s the one he spends the second most time in, so it’s at least a pretty prominent one.  The figure stands just shy of 7 inches tall and he has 33 points of articulation.  The articulation scheme is very similar to Alisha’s, though he also gets a ball-jointed waist, which adds just a little more range to his posing.  The sculpt appears to be unique to this release.  It’s the only way thus far to get Buzz with the flight cap, so that’s cool

and unique.  The detailing on the sculpt is generally pretty solid.  He’s definitely a good recreation of the animation model, and this particular look has a lot of cool intricate details to work with.  Some areas, notably the arms and legs, are a little softer on the detail work, but the overall look is pretty great.  Buzz’s paint work is fairly strong.  The base work is nice and clean, and the level of work on the small printing and insignias is particularly impressive.  Buzz is packed with his removable helmet, a rifle, the warp crystal in its case, an upgraded version of the IVAN autopilot, his portable computer (with closing lid), and a laser knife.  It’s a great selection of extras, and none of them feel phoned in at all.

Toy Story was my first movie in the theatre, so I definitely have more than a small attachment to the franchise.  As faithful readers will have no doubt picked up from the Matty’s Corner entry about some of the basic figures, I took my son Matthew to see the movie when it was released.  He, unsurprisingly, wanted toys, so I took him to pick out a few.  At the same time, I saw this set, and it really spoke to me.  It was also on sale.  Win-win.  It’s a really great set.  Both figures are really strong, but honestly, the Buzz just really steals the show for me.  The detailing, both in terms of sculpt and paint, as well as the accessories, just really put the whole thing over the top. 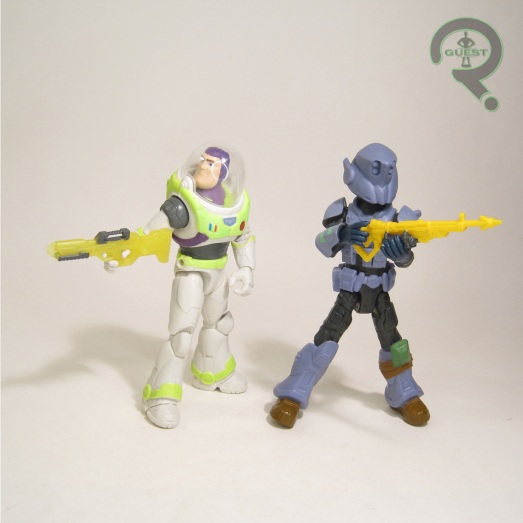 Hi, Ethan here!  Welcome to Matthew’s Corner, where I’m collecting the mad ramblings of my 6 year old Matthew, who also likes to talk about action figures.  What can I say, I’m sympathetic to his need to ramble about action figures.  So, I’m just gonna let him take it away…though, for what it’s worth, I’m still transcribing for him.

Hello.  It’s Matthew again!  Just a reminder: this is not my website.  This is Ethan’s website.  My dad owns this website.  I don’t know what to say now.  Chonkuta kun chot.  [At this point he broke down into mad laughter–Ethan].  I love the Buzz Lightyear movie.  Whoa.  I can always engage with my mouse protocol.  Lifeforms detected.  Meow Meow Meow Meow. [He’s just quoting his talking Sox toy at this point]  Sorry, I’m back to normal.  I was just doing something that the movie said.  I have a stuffed animal.  His name is Sox.  If you see Lightyear, you would see Sox.  He’s a cat.  But I want to talk about the action figures.  I have Buzz Lightyear and Mo!  If you know who they are, then you may have watched the movie.

I’m gonna talk everything about Mo.  Mo is the guy with a blue hat.  He is a weird guy and he thinks sandwiches go “Meat, bread, meat.”  Mo has 20 joints of articulation total.  I like Mo a little bit.  I like that the figure actually comes with the hat.  I usually put it on him often in most of the poses I do.  I like the paint, I like the sculpt, I like the pieces.  I don’t like how his face looks.  It just looks weird.  He feels good.  Moving on!

THE MATTHEW HALF OF THE EQUATION

My best friend Ethan got my figures for me.  He’s my best buddy ever.  He picked these two out for me.  The characters I liked almost the best in the movie.  I like Sox the best of all, but they didn’t have Sox at the store.  I got the figures from Target.  I like the figures overall.  There are more.  Maybe I can review them next time.  I don’t know.  Please don’t be shy.  Look at this website.  Talk back.  Do everything you can to see the website.  Good bye!  Have a good day! 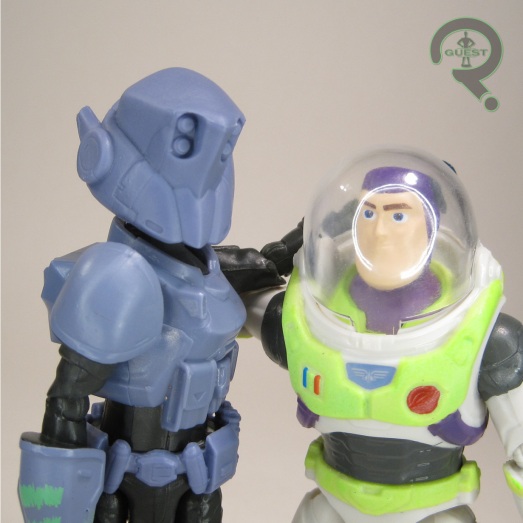 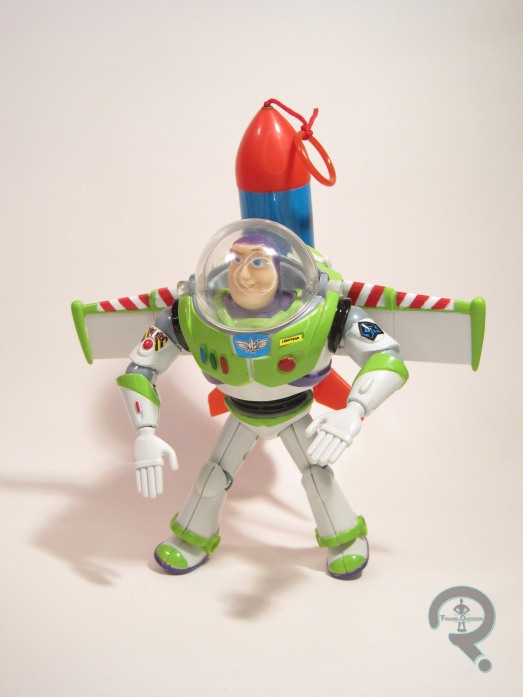 “To infinity, and beyond!”

In the ’90s, it was easier to say what movies *weren’t* getting some sort of tie-in toyline.  Surprising absolutely no one, Toy Story, a movie with “toy” in the title, got an accompanying toyline.  Perhaps the most surprising thing about it was that the toys came from the relative unknowns at Thinkway Toys, and that there weren’t a lot more of them.  Nevertheless, it served to give us basic figures of the two main players, Woody and Buzz.  I’ll be looking at the latter today.

Buzz Lightyear was part of the first, and only, series of Thinkway’s Toy Story line.  There were actually two releases of this guy; one in his standard colors, and one with chrome sections in-place of the white.  The white was of course the more common of the two, but at this point, neither’s particularly hard to find.  I have both, because I’m me.  The figure stands 5 1/2 inches tall and he has 13 points of articulation.  That’s still less articulation than the actual figure from the movie, but we’re not talking Small Soldiers levels of reduction or anything.  The figure’s sculpt is actually pretty good for the time.  It matches well with the model from the movie, and manages to be pretty well detailed and quite authentic for the time.  It’s scaled down quite a bit, of course, and there are a few rather obvious points of construction, especially on the legs.  Still, quite nice.  His helmet is probably the most compromised piece on the figure.  In the movie, it’s one solid piece, and it pops up or off completely.  In the real world, that doesn’t work so much, so this figure has a segmented helmet, which pulls back from the front half of his face.  It’s a little hokey, but it’s an okay compromise.  His wings also don’t collapse like in the movie, since there’s not enough space for that.  Instead, the pack just pops off his back, and the wings can be removed outright, thus recreating essentially the same look.  Buzz’s paintwork is decent.  The base application is decent enough, though both figures I have have some serious fuzz on the transitions between colors.  There are decals for the more detail intensive parts, which is actually pretty accurate to the movie.  This version of Buzz was advertised as having “Rocket Flying Action,” which refers to the rocket he gets strapped to him at the end of the movie.  Said rocket is included and can be plugged into the figure’s back.  There’s a zipline sort of a feature, which simulates flying, I guess.

I had the Woody figure from this line as a kid, but I never got a Buzz figure.  Both figures here were picked up from Lost In Time Toys, during one of their sidewalk sales last fall.  They were cheap, and I’d never had them, so I figured, why the heck not?  He’s actually a pretty good figure, especially for the time, and also when compared to the Mattel figures from Toy Story 2.  This was a pleasant surprise.