Hi, Ethan here!  Welcome to Matthew’s Corner, where I’m collecting the mad ramblings of my 6 year old Matthew, who also likes to talk about action figures.  What can I say, I’m sympathetic to his need to ramble about action figures.  So, I’m just gonna let him take it away…though, for what it’s worth, I’m still transcribing for him.

Hello, this is Matthew again.  It has been a while since I have written.  If you were not happy, you can just say so in the comments section.  I understand.  But I have been catching up with all my stuff on my weeks. So, today, I’m talking about Red Ecliptor!  He’s from Power Rangers.  Space Power Rangers [that’s the best Power Rangers –E].  I’m gonna get to the figure now! 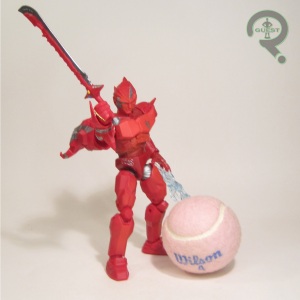 The toyline of Red Ecliptor is Lightning Collection.  The Lightning Collection is a whole toyline of Power Rangers.  Red Ecliptor is a Power Ranger enemy.  He was released by himself.  Red Ecliptor has 33 joints.  He is 6 3/4 inches tall.  He is re-using parts from the normal Ecliptor [who I reviewed here–E].  I like everything about the sculpt.  All of the parts stand out.  I love them all.  He has lines that are kind of criss-cross and swirly.  I like that because it makes him stand out, like that’s the main part of his body.  He looks strong.  And just so that you know, Ecliptor’s sword and stuff are all part of him, because that’s how it is in Space Power Rangers.  The main figure is mostly red and grey.  The eyes are green.  It looks really good with all of those colors.  I like how all the grey looks.  It looks like it’s kind of burned.  He comes with a sword and four hands.  One hand had lightning.  Another is out like he’s touching something.  The other ones look like he’s punching.  I really like the sword. The sword’s colors are red and grey and blue and yellow and brown.  One of the hands is red with blue lightning.  The other hands are just red with gold rings on them.

I got Red Ecliptor because I was thinking of getting a collection of Space Power Rangers.  Ethan, the one that owns this website, had an Ecliptor and that made me want to get one.  So, Ethan got the figure for me and now I have a Red Ecliptor.  I really like Red Ecliptor.  He’s a really special thing to me because Ethan got it for me.  I am all done writing.  I will see you back here for my next review of Shadow!

“Ecliptor adopted Astronema and raised her as his own, eventually becoming her second-in-command as she serves Dark Specter”

Hey, remember yesterday when I was talking about Power Rangers, and more specifically how most of my Power Rangers reviews as of late have been centered on Power Rangers In Space?  Well, surprise surprise, we’re back on In Space.  No actual Rangers today, though.  Instead, I’m looking at two of the show’s antagonists, at least for most of its run, main baddie Astronema and her surrogate father turned henchman Ecliptor!

Ecliptor and Astronema are an Amazon-exclusive Lightning Collection two-pack, which, like other recent exclusives, also had limited quantities available through Hasbro Pulse.  Unlike the Pink Ranger pack, they weren’t part of any particular subset focus, just a general Lightning Collection push. 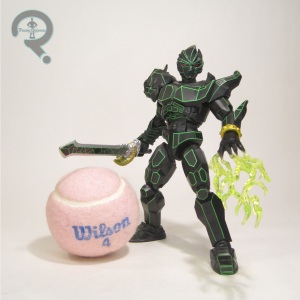 The new piece of this set, and certainly its main selling point, Ecliptor makes a rare toy appearance here, doubly interesting because he’s a non-MMPR antagonist who wasn’t an any point a Ranger or Ranger equivalent.  And he’s even slated for another figure down the line, if you can believe it.  Ecliptor is seen here in his most standard set-up, before his power-up or cyborg reprograming.  The figure stands 6 3/4 inches tall and has 33 points of articulation.  Despite how bulky and squared off his design is, Ecliptor actually has a pretty solid range of motion, and can get into quite a number of impressive poses.  And, thanks to the really huge feet sported by the original Yugande design, he’s also quite stable, which is a definite plus.  His sculpt is an all-new piece, set to be shared with the upcoming Red Ecliptor figure,

but unique for now at least.  It does a rather nice job of capturing the show design for the character, in all of its wire-frame-y, limited polygon count glory.  It’s very clean and sharply detailed, and just looks really slick.  The paint work on Ecliptor isn’t *quite* as in-depth as it should be for true show-accuracy.  There should be a great deal more green linework than is currently present.  That being said, they’ve done a respectable job of at the very least giving it a bit of visual shorthand, so that the overall appearance is preserved.  Ecliptor is packed with a fairly nice selection of extras, including his sword, two sets of hands (fists, and a gripping/open with effects combo), an effect for the sword, and a larger effect that’s meant to encircle the whole figure.  The right fist on my figure is rather oddly missing all of the green detailing, but it’s otherwise a solid selection.

Wow, remember when it was a big deal to have the *one* Astronema?  And now there’s *two*?  Who could have foreseen getting an Astronema as a hum-drum affair.  I mean, I guess it’s really not that hum-drum.  Astronema does have a slightly evolving appearance throughout the show, meaning there are a few options for looks, beyond just what we got on the first figure.  This one specifically draws influence from the show’s first three episodes.  The figure stands 6 inches tall and she has 30 points of articulation.  Though at first glance, the figure seems like she’s a pretty straight repaint of the last figure, she’s actually not.  The head is all-new, sporting a slightly different hairstyle,

but she also gets an all-new torso piece, which replaces many of the simple painted details from the last with proper sculpted details.  It takes a figure I already quite liked, and makes her even better, which is quite nice in my book.  The paint work isn’t terribly different from the last one, though the face paint is a lot more subtle with the coloring than the last release.  It’s again an improvement on an already pretty solid release.  Astronema is packed with two sets of hands, her spear, and an effects piece, much like the last time.  The effect is at least a different color, so there’s that going for it.

Obviously, given how much of an In Space fan I am, I wasn’t going to miss out on Ecliptor.  While I wasn’t initially thrilled about getting another Astronema, it annoyed me less than the pack-out on yesterday’s set.  While I missed the Pulse window on this set, I was able to get in through Amazon, and they also didn’t get cancelled, so that was a win.  I really like this set in hand.  Ecliptor is a fantastic figure, and I look forward to seeing more variants of him.  Astronema is a figure I definitely warmed up on, especially after seeing how any improvements they’d made.  All in all, not a bad set.