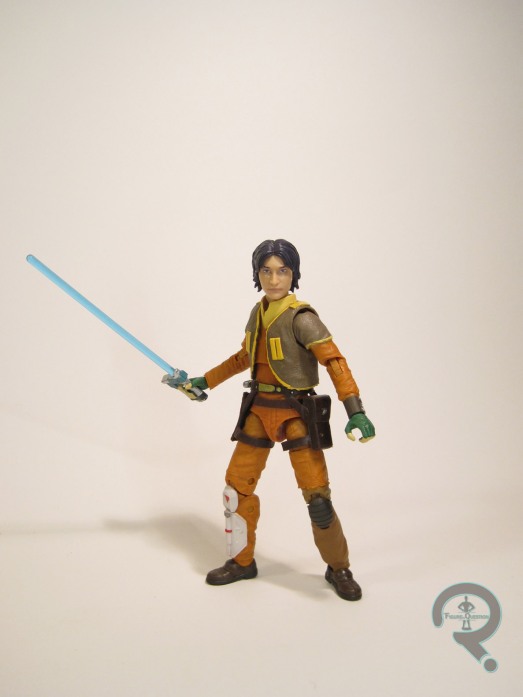 “Growing up, Ezra learned to trust no one and to rely on his street smarts – and subconcious Force abilities – to survive. This all changes with his introduction to the crew of the Ghost, a small band of rebels fighting back against the Empire. Ezra comes to believe in their cause, and sees that he can help change the galaxy for the better.”

Cartoons have been a part of the Star Wars universe since the mid-point of the much maligned Holiday Special, and they’ve been a part of the toyline since Droids and Ewoks, but it wasn’t until 2003’s The Clone Wars that we really faced the dilemma of how to handle animation-based figures in terms of integrating them with the rest of the line.  Clone Wars set the precedent of “why not both?” and that’s pretty much been the standard since.  The cast of Star Wars: Rebels were initially  only released in their animation accurate forms, but Hasbro has subsequently worked them into The Black Series one by one.  The latest is the character that’s ostensibly the main character of the show, Ezra Bridger. 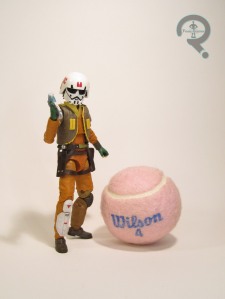 Ezra Bridger is figure 86 in the Black Series line-up and is part of the latest assortment of figures.  He’s packed alongside fellow Ghost crew-member Chopper, plus Obi-Wan, and Aphra and her companion droids.   The figure stands 5 1/4 inches tall and he has 27 points of articulation.  Ezra’s based on his Season 1/2 appearance, though like the prior animation figures, it’s a real-world take on his design.  I find that his translation to a real-world look was slightly more successful than Kanan, though I’d say it’s partially due to Ezra being younger, and therefore being slightly more excusable with an ever so slightly cartoony appearance.  I feel like his eyes could stand to be just a touch lower on the head, but beyond that, he’s fairly realistic, and his sculpt handles things nicely.  His articulation is fairly well integrated and for the most part has a solid range, but it’s worth noting that his hips are rather on the restricted side, due to the belt straps and their placement.  It’s not awful, and it’s not like we haven’t seen issues like this before in the line, but it’s a shame there’s not an easy fix for it.  Ezra’s paintwork is all pretty decent.  It’s mostly just base color work, but it gets it all down correctly and none of the sculpted details have been overlooked.  He also uses the printed face technique, which works pretty well for this particular figure.  Ezra is packed with his unique lightsaber, as well as his stolen Imperial Cadet helmet, which sits surprisingly well on his head.  Not a ton of extras, but its one more than the usual single lightsaber we get with Jedi characters, so I’m certainly not going to knock it.

Ezra is a good example of my herd mentality when it comes to collecting.  On his own, I’m not certain I would have bought him, but he came out alongside the Obi-Wan figure I knew I wanted and the Doctor Aphra figures I was picking up for Super Awesome Fiancee, and I figured that, since I already have most of the Rebels crew anyway, I might as well grab him, too.  Honestly, he’s a pretty solid figure, and I’m glad I picked him up.

I grabbed Ezra from my friends at All Time Toys.  If you’re looking for Star Wars, or other toys both old and new, please check out their website and their eBay storefront. 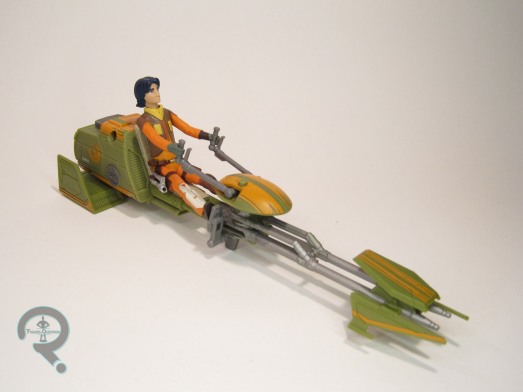 “Once a lone street urchin stealing to survive on Lothal, Ezra Bridger has been taken in by the crew of the Ghost and is now a determined freedom fighter who plays a critical role in the rebellion against the Empire. With the help of his master, Kanan, Ezra is well on his way to becoming a Jedi – he uses the Force to fight the Imperial opposition that threatens to destroy the galaxy.”

If there’s a competitor to Kanan Jarrus for the “main character” slot in Rebels, it’s his apprentice Ezra Bridger, who is essentially Aladdin in space.  Cool?  But, instead of a magic carpet, he’s got a speeder bike.  So, that’s different, I guess.  Let’s just review this toy already. 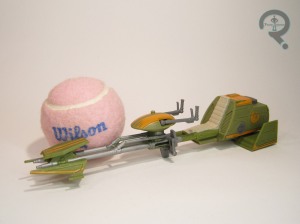 Ah, yes, who can forget the eternally memorable, unmistakably distinctive…speeder owned by Ezra Bridger.  Okay, so I still haven’t actually gotten past more than the first season of Rebels, and I only watched it the once, so I don’t recall off-hand if this is actually in it.  I want to say it is.  But I doubt it’s a prominent fixture regardless.  Anyway, this set was part of the smaller scale vehicle releases that hit on the first Force Friday, alongside the Force Awakens products.  It was then re-released alongside the Rogue One product, which means it pretty much never, ever left store shelves.  The vehicle is about 6 inches long and stands about 2 inches tall.  It’s more of a basic seated bike than the ones from Return of the Jedi, which is fortunate given the reduced articulation of the figures.  It’s a pretty decent sculpt, slightly softer on the details like prior vehicles, but it’s not terrible.  It’s certainly sharper detailing than we saw on the Y-Wing yesterday, so that’s a plus.  The paintwork on the bike is certainly unique. Green and orange is quite a unique combo.  A hideous combo, but certainly a unique one.

Obviously, it would be odd to release Ezra Bridger’s Speeder without an Ezra figure, so here it is.  Of course, as sensible as it may be in this particular case, he ends up in the same boat as the Kanan figure, since at this point we had a ton of Ezra figures already (and, like Kanan, there was a single-packed Ezra, released at the same exact product launch as this one).  That said, this is actually the first figure of him I’ve gotten, so it’s not a total waste.  The figure stands 3 1/2 inches tall and he has 5 points of articulation.  The sculpt is largely the same as the first Rebels Ezra, but with the legs tweaked to add some pouches.  The sculpt does a respectable job of capturing the show design, and I think it’s a slightly better sculpt than the Kanan figure.  His paintwork is pretty clean, and pretty bright as well (this signifies that my figure is the later release; the earlier ones were rather washed out).  Ezra is packed with his lightsaber, which, unlike Kanan’s has a removable blade, which is pretty cool.

Like Kanan and the Y-Wing, Ezra and his speeder were picked up in the TRU liquidation sales.  I hadn’t really planned on getting it, but I didn’t yet have an Ezra figure, and this was the easiest way to get him.  While it’s hardly the most thrilling set, I can appreciate it for what it is.