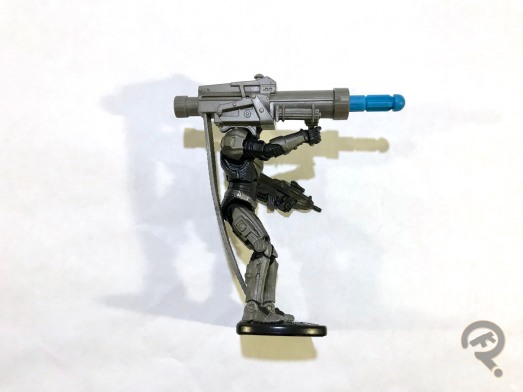 Not gonna lie, this one threw me a little bit. I’m not sure if this was just a movie tie-in or what but I guess Hasbro picked up the G.I. Joe license at some point. I’m not 100% sure so I guess let’s just jump into the review.  This is the Ripcord. 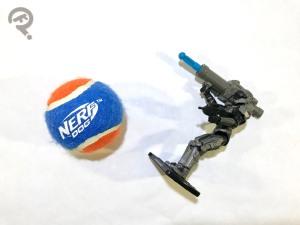 The Ripcord blaster was released in 2009 as part of the G.I. Joe: Rise of Cobra movie-tie in line.  It uses the same basic mechanism as blasters such a the Stark Strike Gauntlet blaster or the Avengers Assemblers blasters, although with a proprietary ammo type I’ve never seen before. It’s certainly an odd choice but I suppose we’ve seen other brands try the hard plastic ammo over foam. I mean, just look at Boomco. The ergonomics are a little odd to say the least. For one, the whole blaster is shaped like a person holding a bazooka type launcher, so I really don’t know where to hold it. Additionally, the trigger is more like a button on the top of the blaster so you pretty much have to use both hands to fire. There are no sights or rails to speak of so aiming is a bit of a chore, not

that it really would help given the anemic power of the blaster itself. Despite the lack of rails the blaster does actually come with a fair number of accessories, including a stand, an ammo belt that is purely aesthetic, and a smaller model blaster that seems to be based off the FN F2000. Sections of the blaster also are built to move like the arms and legs of the person. I’m not sure what purpose of this feature is as none of the possible poses really help the glaring ergonomic issues. The helmet of the person does open and come off with some effort revealing the face of the character Ripcord from the movie but this has no effect on the performance of the blaster, which is, again, quite poor. Something I find a little odd about this blaster that distinguishes it from every other blaster in the Nerf catalogue is the lack of an orange barrel. You could argue that this thing is so far removed from a real gun visually that it doesn’t need one, but it stood out to me. The Ripcord blaster comes with the blaster, the person, their helmet, the ammo belt, and a stand. 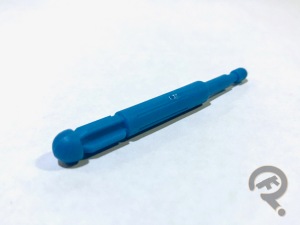 really don’t know what Hasbro was thinking with this one. I mean, I’m certainly no stranger to weird, sub-par licensed blasters like what we’ve seen with Marvel blasters but even those have some semblance of a proper blaster. This is just something else entirely different. Who knows, maybe if Hasbro keeps the license further down the road, we might get some better blasters in this line. 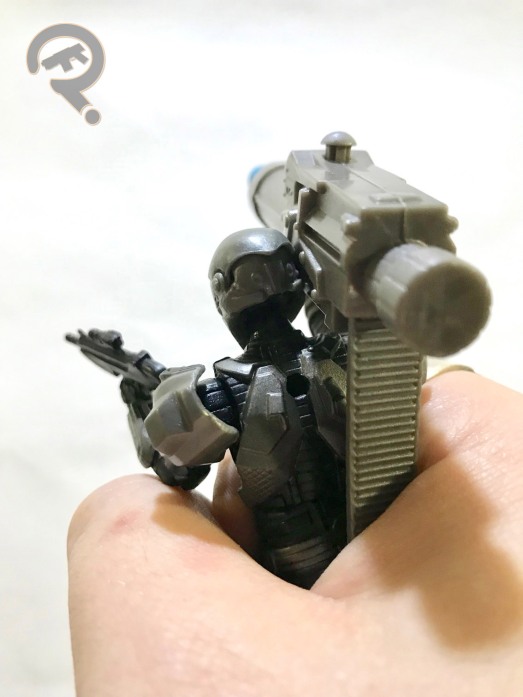 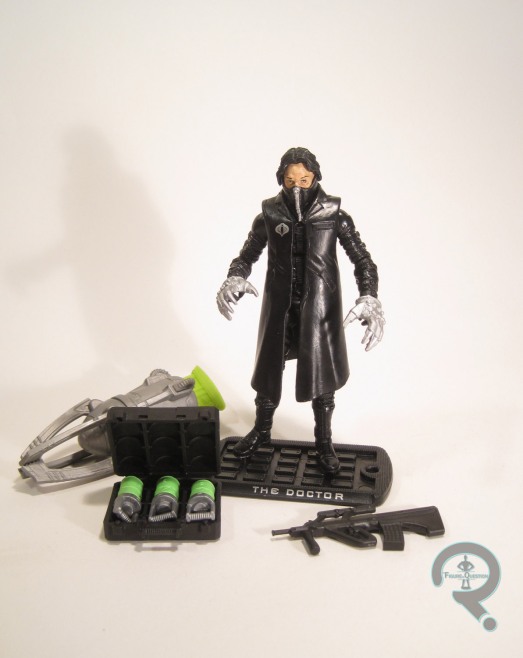 “Rex is the chief experimental doctor for M.A.R.S. Industries and developer of advanced nanotechnology. Disfigured in an explosion, he relies on life support equipment as he launches a diabolical plan to satisfy his thirst for power and revenge. ”

G.I. Joe: Rise of Cobra isn’t a particularly well-regarded movie.  It definitely took some…different approaches to the source material.  I myself kind of enjoyed the movie, but with the caveat that I liked it as it’s own, separate thing.  It’s a good spy-flick, but the Joe label is a bit misplaced.  Misplacing of labels seems to have gone around a lot in this movie.  I absolutely loved Joseph Gordon Levitt’s turn as Doctor Mindbender.  The only problem is that as it turns out, the mysteriously named “The Doctor,” despite checking off every mark for Mindbender (including the character’s signature monocle), is actually Cobra Commander.  Odd choice.  But hey, cool action figures, though! 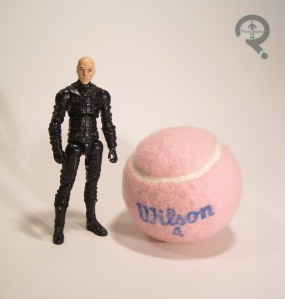 Rex “The Doctor” Lewis was released in the third series of Hasbro’s G.I. Joe: Rise of Cobra tie-in line, which hit a little while after the film’s release.  Presumably, he was in a later assortment so that the reveal that he was Baroness’s not-quite-dead brother Rex could be kept secret.  The figure stands about 4 inches tall and he has 22 points of articulation.  The sculpt for the Doctor was all-new to him, and as far as I know, it’s not been re-used (well, apart from the labcoat, which has shown up on a few figures).  The sculpt is certainly different.  Hasbro opted to not be 100% faithful to the film’s version of Rex, who dressed more like an actual scientist (well, apart from the headgear).  This figure has some sort of  Edward Scissorhands get-up.  Which, with the addition of the jacket, ends up looking about the same as the movie design anyway, so I guess it didn’t really matter.  The head stays pretty faithful, apart from the loss of the monocle thing.  The hair and breathing apparatus are both removable, allowing you to view the fully unmasked Rex, who actually looks a fair bit like Levitt in the scar make-up from the film.  Despite being removable, the hair and rebreather fit pretty tightly to the head, and look pretty decent overall, and they also both stay in place really well, which is a definite plus.  The paint on the Doctor is largely confined to the head (everything else is mostly black plastic).  The detail work is actually pretty great, and they convey the scarred nature of his skin quite nicely.  The Doctor is packed with a pair of claw gloves, a giant nanite-injector claw-thing, a pistol, a rifle, a briefcase with three containers of nanites, and a display stand with “THE DOCTOR” printed on it.  Not a bad assortment of extras!  The case with the nanites and the claw gloves are definitely my favorites, but they’re all pretty fun extras.

The Doctor was one of my favorite parts of Rise of Cobra, so I was a little dismayed that he wasn’t out when the film hit.  I patiently waited for his release, and ended up finding him at the local Walmart while grabbing some Christmas decorations with my Dad.  He’s one of the better entries in the Rise of Cobra line, and one of my favorite modern-era Joes in general.  Not bad for a figure from a movie nobody likes! 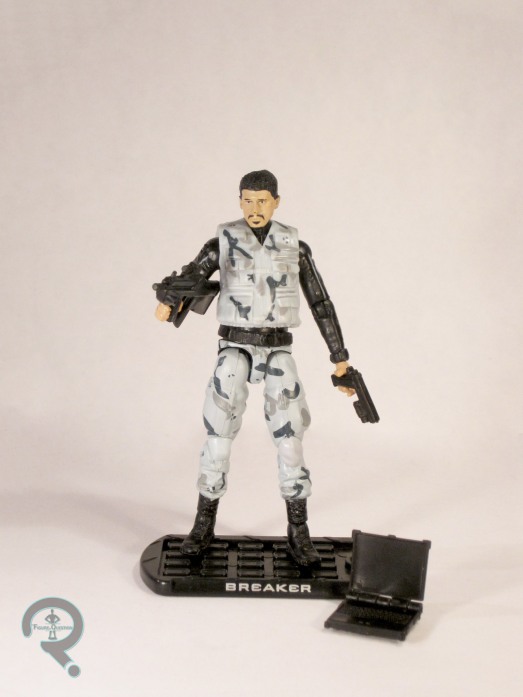 Breaker was released in the first series of Hasbro’s tie-in line for Rise of Cobra.  He’s based on Breaker’s more casual look from the film, instead of his “impact armor” look.  The figure stands roughly 3 ¾ inches tall and has 16 points of articulation.  The sculpt is pretty good overall, with nice texturing and folds and such.  The head sculpt is a decent approximation of the actor who plays Breaker in the film.  However good the sculpt is, it doesn’t matter, because the paint is where this figure falls apart.  The paint is thickly applied, and kind of haphazardly applied.  The paint on the body is a bit better, but still leaves a lot to be desired.  Breaker is accessorized with a removable vest, a machine gun, a handgun, a laptop, a big freaking missile launcher, and a stand with his name on it.  The missile launcher isn’t pictured, because I got rid of it, along with all the other over-sized missile launchers Hasbro seems intent on giving us.

I got Breaker along with several other figures from the line at the time of the movie’s release.  I liked the character, so I bought the figure.  Mistakes may have been made.