So it turns out I’m not dead and I’m still on this site. Sorry. But speaking of dead things, ghosts, like the Modulus Ghost Ops line of blasters, and yes it is a line now.  You only need 2 points to make a line and we now have the second point. Also apparently not dead is the old style of giving Nerf blasters alphanumeric designations along with their name, so today I’ll be looking at the Shadow ICS-6.

The Shadow was released in 2019 as the second only blaster entry into the Ghost Ops subset of the Modulus line. It uses the internal magazine system we’ve seen on blasters like the Magnus and Rey/Han blasters. Functionally, however, it has a slightly different loading system which allows the magazine to be loaded when the blaster is unprimed. Additionally, other external features like copious accessory rails, a barrel attachment point and stock attachment point separate the Shadow from other internal magazine type blasters. Perhaps most notable about the Shadow, somewhat counterintuitively, is its light up feature, much like the Evader that came before it.  The secondary trigger on the grip activates the lights, which create a pretty cool effect especially in low light. I don’t know if it’s just my blaster, but one of the lights is placed in just the right position to shine right into my face when I try to aim the blaster with the lights on, so that’s a little irksome but by no means a deal breaker. Like the Evader, the Shadow has a tiny little switch on the front end that activates one more light inside the barrel when an extension is put on. This won’t affect 95% of barrels out there, but any of the Ghost Ops barrels light up like fiber optics. Performance-wise, the Shadow does more or less how you’d expect a modern Nerf blaster. Shots fly

reasonably far and hit equally as hard, maybe not as much as a full-sized blaster, but it is a pistol, kind of. Now we come to my main complaint about the Shadow. When you take into account that it is a 6 shot pistol, it’s huge, a detail not helped by the entirely clear body. This means you can see all of the dead space inside the blaster, which makes the size all the more baffling. I guess it’s not a huge issue, but it bugs me. I guess the extra size does make it just that little bit more intimidating when you bust into your younger sibling’s room and double tap them in the head like a Nerf hitman. The Shadow ICS-6 comes packaged with a barrel attachment and 6 Modulus Elite darts. The light up feature requires 3 AAA batteries but is not needed to operate the blaster otherwise.

I want to be clear on one thing, no pun intended. I really like the Shadow as a blaster. That being said, my knack for picking out blasters that not many other people like seems to be in effect again. From what I’ve been able to find, not many people are really thrilled with the Shadow and I can’t quite understand why. It’s a decent blaster with just a few things that are less than optimal.

What’s this?  A review of an actually new blaster?  Yes, we’re well into August and so that inevitably means getting hit by a wave of new Nerf blasters, many of which were seen at NY Toy Fair back in February.  Today’s review is one of those blasters.  It’s also an example of a spin-off of a spin-off, where at first we had N-Strike Elite, then Modulus, now we have Modulus Ghost Ops.  Spooky.  Let’s take a look at the blaster.

If you hadn’t yet read the title of this post, I am indeed reviewing the Modulus Ghost Ops Evader.  It was released in 2018 as the first and, so far, only blaster in the Ghost Ops sub-series.  Functionally, it’s a Stryfe just with a side-loading magazine, still using the same flywheel semi-auto mechanism.  Hey, if it works, use it.  The big draw for the Evader is the completely clear plastic the shell is cast in, and subsequently, the light-up feature that this allows.  The main pistol grip contains all of the standard flywheel controls we’re used to, but the fore-grip also has a button which, when pressed, activates the green LEDs inside the body of the blaster, giving it an almost night-vision kind of look.  That is, as long as it’s not too bright wherever you are.  The effect definitely gets stronger in darker conditions, unsurprisingly.  Assisting the LEDs is an array of light piping and refractive surfaces that give the light more places to bounce off so you can actually see it.  It should be noted that the button for the lights has to be held down to keep the lights on.  I had to jerry-rig my blaster to keep it lit for one of the photos without my hands getting in the way, so don’t expect that to be the norm.  The lights are overall pretty well incorporated into the blaster’s design, and I especially like the lights inside the muzzle that are only activated when you attach the included barrel extension.  The shell appears to be well made, but it’s hard to see what the shape of it really is the way you could with an opaque blaster. 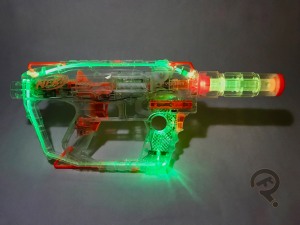 When I first took it out of the box, it was a lot bigger than I expected but that turned out to be ok since it addressed my concern that the thumbhole fore-grip might be small and awkward.  It’s still not conventional but even with my larger hands, I can say it’s perfectly functional.  Being a Modulus blaster, the Evader sports a top, bottom and side rail (right side only), as well as attachment points for a stock and a barrel.  I’ve only used the Evader with the batteries that came installed from the store, but even as such, it seems like it has a decent amount of power behind it.  Shots travel far and hit hard.  It’s already been proven to be effective in combat in my ongoing campaign against the spider crickets in my basement.  I expect it would perform just as admirably against younger siblings, especially if you use the light-up feature as some sort of psychological/intimidation tactic in conjunction with the actual darts.  The Evader comes packaged with the barrel extension, 12 white Modulus Elite darts, a 12 round magazine, and the 4 AA batteries that power both the lights and flywheels already installed.

The Evader was the first of the new 2018 wave of blasters that I purchased, but not the first I attempted to buy.  A few weeks earlier, I had found the Delta Trooper on shelves at my local Target, but when I went to go check out, I was told they couldn’t sell it to me so I had to leave without it.  When I eventually went back, I found that they had just recently put out the new blasters with the one exception being the Delta Trooper.  It doesn’t really have much to do with the Evader itself but its a bit of a story.