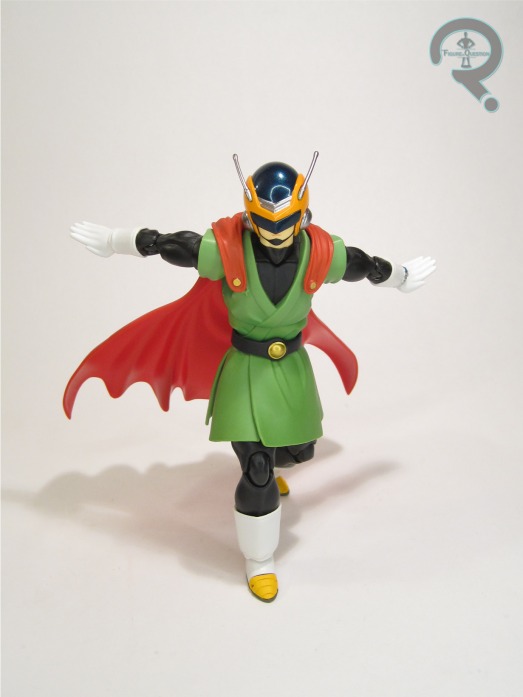 Oh wow, another Dragon Ball review?  This soon?  Is the reviewer going crazy?  Or is it just that he’s got no means of getting new toys and so therefore just has to make his way through pretty much whatever he’s got sitting here waiting to be reviewed in order to keep up with a daily review schedule?  I think it might actually be both, but I’ll let you know when I figure it out for sure.  So, Dragon Ball/Dragon Ball Z‘s got a couple of time skips built into it.  The first is of course the big jump from Dragon Ball to Dragon Ball Z, which sees Goku and his friends go from kids to adults.  However, within Z, there’s also another sizable jump following the resolution of “Cell Games”, doing a similar time skip to what we saw with Goku, but this time with his son Gohan, who takes over as the series’ main focus, at least until his dad comes back from the dead…again.  During his time as lead, a high-school aged Gohan takes on the secret identity of the Great Saiyaman in order to protect the city without giving away his identity.  I’m looking at a figure of that identity today! 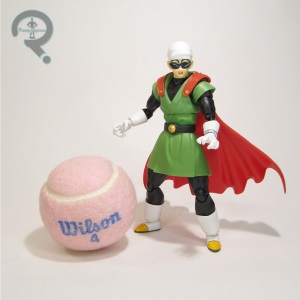 Great Saiyaman was released in 2019 as part of the Dragon Ball Z-sub-set of the S.H. Figuarts line.  He’s the third Gohan figure, slotting right in the middle between the previously released kid Gohan and adult Gohan.  The figure stands 5 3/4 inches tall and he has 37 points of articulation.  Saiyaman scales pretty well with the rest of the Figuarts Dragon Ball stuff I’ve got, excepting of course the Krillin that’s out of scale with everything else.  The sculpt is probably the sturdiest and cleanest of the Dragon Ball figures I’ve looked at.  The articulation doesn’t break up the sculpt too much, and he seems to follow pretty closely to the animation designs for the character.  The only part of the figure I don’t really much care for is his cape, which has a hard plastic construction (except for the part on the shoulders, which is rubber), which makes it really awkward to handle.  It doesn’t help that it also doesn’t stay in place particularly well, meaning it falls off a lot during normal posing.  If you can get it to work with you, however, it makes for some dynamic looks.  The paint work on Saiyaman is pretty simple, but that doesn’t mean it’s not a solid application.  It seems to match 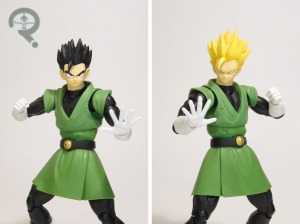 pretty well with the show in terms of color, and I quite like the slightly different finish they’ve given the helmet.  It does well to differentiate it as a different, harder material than the other portions of the costume.  As with most Figuarts releases, Saiyaman is quite a well accessorized.  He’s got four sets of hands (in fists, open gesture, wide open gesture, and flat), two faceplates for the standard helmeted head (calm and angry), a plug for the spot on his back where the cape usually goes (should you wish to display him without it), an alternate left forearm without his watch, and not one, not two, but three separate extra heads.  He’s got his “tournament” look with the bandana and sunglasses, which is kind of the standard alt look for this costume, as well as a standard unmasked Gohan, and a Super Saiyan Gohan.   What I find most impressive about this release is how many distinct alternate appearances he’s got thanks to all those parts; you can effectively build four different figures with the parts included here.  I’m planning to stick with the helmeted look, but boy is it tricky to stick with just one.

Though my main focus with DBZ is the Android Saga, which is before the time-skip that leads to this guy, I did watch this particular chunk of Gohan’s story pretty regularly when it was airing on Cartoon Network.  I’m also just generally a fan of Super Heroes, so this part of the story always stuck out to me.  The story of how I got this Saiyaman figure is pretty similar to how I got Krillin, though without the “I missed out on the previous version” bit.  I recall him being announced, and I thought about picking him up a few times, but never did get around to it.  He was traded into All Time, and I still had some trade credit to burn, so he was mine.  I didn’t have much in the way of expectations for this figure, and I wasn’t sure about what to do with him on his own, but this figure’s such a nice package deal to himself, and I’m really glad I decided to grab him.