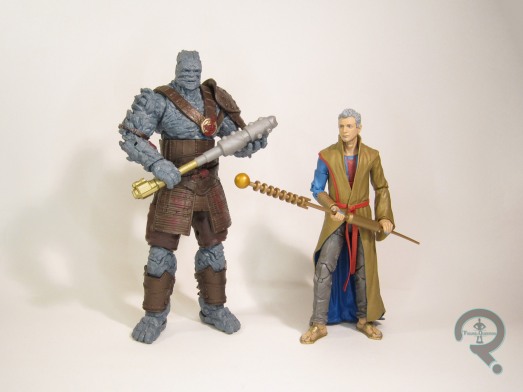 While none of the Thor films have been short on world-building and colorful and interesting side characters, Ragnarok really stepped things up even further, with some of the most colorful side characters we’ve seen so far.  The entire Sakaar segment of the story is really just a showcase of the MCU’s quirkier side, following very much in the footsteps of Guardians before it.  Part of the success really just came from letting actors with well-established quirks play the characters as they liked, which resulted in to of the film’s most entertaining characters, the Grandmaster and Korg!

Like yesterday’s pairing, Grandmaster and Korg are part of the MCU-based line-up of two packs for the “80 Years of Marvel” sub-line of Marvel Legends.  It’s the second Ragnarok set, which definitely gives the whole line-up a decidedly Ragnarok-heavy feel.  I guess they wanted to make up for leaving it out of the Ten Years celebration.  Though the two characters never actually meet in the film, Grandmaster and Korg are actually a pretty sensible pairing, seeing as Grandmaster is the ruler of Sakaar and Korg is the leader of the (ill-planned) resistance efforts. 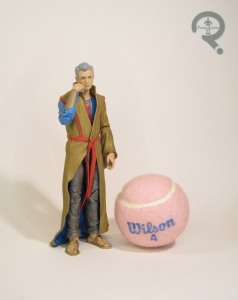 “The ancient and tyrannical ruler of Sakaar enjoys gaming, gambling, and manipulation.  He runs the Contest of Champions, pitting warriors from across the galaxy against each other in a fight to the death.”

In the comic version of Planet Hulk (which the Sakaar segment of Ragnarok adapts), the ruler of Sakaar is actually the Red King, a rather different type of character than the Grandmaster.  Red King is admittedly a slightly generic character (his name is “Red King” for Pete’s sake), so a slightly more charismatic take on the Grandmaster was included instead, which really just worked out well for everyone.  Pretty much right on top of this figure’s release, there was also a Grandmaster included in a Summer Con-exclusive two pack alongside his brother the Collector.  Apart from the facial expression, the two are pretty much identical.  This figure stands 6 1/4 inches tall and has 31 points of articulation.  At his core, Grandmaster is built on the Nick Fury body introduced early on this year.  He uses the legs and left hand from that figure, with the rest of his parts being all-new (well, apart from being shared with the previously mentioned exclusive).  The legs are honestly a pretty clever re-use, since the new color is enough to sell them as an entirely different style of pants.  The rest of the parts really work to sell the Grandmaster’s rather flamboyant design.  The robe is handled via an overlay piece which can be removed if you so choose, not that I can imagine anyone would want to.  There’s a very nice flow the how it’s sculpted to hang, which looks quite natural and manages to not get in the way of his articulation too much.  The head on this version of Grandmaster sports a more reserved expression than the exclusive, and at first I was a little bummed about that, but in person I actually quite like this look.  Grandmaster’s appropriately bright and colorful in the paint department, which definitely makes him a figure that pops.  The application is all nice and clean, and the face looks quite realistic.  Grandmaster is packed with his melting prong from the movie.

“A Kronan warrior on the planet Sakaar, Korg is forced to compete in the Contest of Champions.  When he meets fellow warrior Thor, he allies with the Asgardian to escape Sakaar and defeat Hela.”

Korg was lifted wholesale from Planet Hulk, having no connection to Thor in the comics (what with Thor being dead during the stories that introduced Korg and all).  That said, Thor’s very first foes were actually Kronans, and we had even seen one in The Dark World, which made Korg a pretty solid choice for inclusion in Ragnarok.  It also gave director Taika Waititi a chance to be super goofy, which, like the Grandmaster thing above, really worked out well for everyone.  The figure stands just shy of 8 inches tall and he sports 30 points of articulation.  Korg’s got a brand-new sculpt, and I’m hard-pressed to figure out exactly what else Hasbro could do with this, so my guess is it’ll be a one-off.  It’s a very impressive piece of work; it takes the strong work we saw on the Thing figure from last year and adds even more of a realistic element to it.  It follows the design from the movie quite closely, and even manages to work in the articulation pretty well.  Korg’s paintwork is a fairly nuanced affair.  He’s one of the less colorful characters from the film, but that doesn’t stop Hasbro from getting down the color scheme he does have, and offering up some pretty solid accent work on his rocky skin and leather gear.  Korg is packed with his mace-like thing, which he holds in the least threatening way possible, as the character would.

Honestly, when Ragnarok was released, I never thought either of these two would get Legends releases, which is part of why I tracked down most of the Minimates.  But even the Minimates didn’t have a Korg, which was certainly a bummer.  So, Hasbro showing off this pairing last year meant for a definite buy from me.  Grandmaster is a pretty solid figure, no doubt, but Korg completely steals the show.  He’s definitely one of the best MCU figures Hasbro’s put out, and I really like him a lot.  He was really worth the wait.

Grandmaster and Korg came from my sponsors at All Time Toys.  If you’re looking for Marvel Legends, or other toys both old and new, please check out their website and their eBay storefront.

Thor Ragnarok hit the big screen last week.  After being more than a little underwhelmed by Thor’s last solo cinematic adventure, I was definitely hoping this one would be a marked improvement.  Having seen it, I’d say it most definitely succeeded on that front.  It wasn’t perfect, but it was still very, very good.  There were a quite a few new characters introduced in the movie, and several of them were real standouts.  Two of my favorites are the two I’m covering today, Skurge and Grandmaster!

Surge and Grandmaster are one of the Walgreens-exclusive sets for the Thor Ragnarok tie-in series of Marvel Minimates.  They’re something of an odd pairing, truth be told, seeing as the two don’t ever once interact or even participate in the same segments of the plot line.  That said, I’m hardly going to complain, since I like both characters.

In the comics, Skurge was at first simply known as “The Executioner.”  He was the right-hand-man to the Enchantress, and a key piece of the original Masters of Evil.  Definitely an important player, so his inclusion in the film was definitely something I was very much looking forward to.  Throw in that he was played by Karl Urban, a personal favorite, and you’ve got a real winner.  His design in the film isn’t too far removed from his comics incarnation, which means this figure can pretty well serve as either version.  The figure stands about 2 1/4 inches tall and he has 14 points of articulation.  He’s built on the usual body, with add-ons for his chest cap and bracers.  The add-ons are new to Skurge, and are pretty decent overall.  The torso piece could probably be a little tighter to the body, but it looks decent enough.  His paintwork is decent enough.  It’s not super vibrant, but that’s true of the movie design, and it’s in keeping with what we’ve seen of the Asgardians in the MCU so far.  The details are all pretty crisp and clean, and his face looks passably like Karl Urban.  Accessories are easily this figure’s biggest failing.  He gets a clear display stand and nothing else.  Not his axe, not even his twin M-16s, which DST already had the molds for.  It’s more than a little disappointing.

Grandmaster of the comics is one of the Marvel universe’s Elders, and he’s actually a little bit on the boring side.  In the movie, he’s Jeff Goldbloom, essentially playing himself.  That works out pretty well for…well, everybody.  He too is built on the standard base body, with a unique upper left arm (taken from the TMNT Foot Ninja), as well as add ons for his hair and jacket.  The pieces are decently handled, and look pretty sharp.  They translate the film design pretty well, which is pretty great.  His paint work is nice and colorful; the Grandmaster has one of the more vivid designs in the film, and that comes through here.  The likeness of Goldbloom is pretty spot-on as well, which is a definite plus.  Like Skurge, Grandmaster’s only accessory is his clear display stand, but that’s a bit less annoying in his case, since there’s not as much in the way of obvious extras.

I got this pair at the same time as the last two sets I reviewed.  By-and-large, I was holding off on the Ragnarok merch until after the film’s release, but these two in particular called to me.  As they ended up being two of my favorite parts of the movie, it’s safe to say I don’t regret my purchase.  Sure, it’s annoying that they don’t really have any accessories, but the ‘mates themselves are pretty solid.