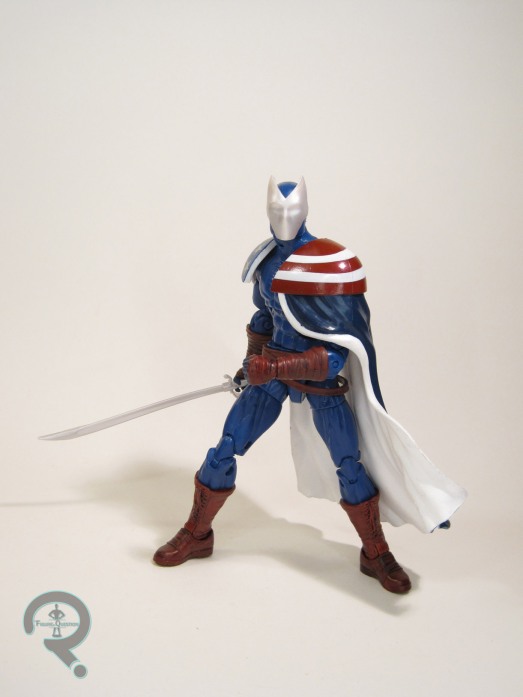 From the fallout of the dreaded “Heroes Reborn” relaunch of the ’90s, there was actually one notable not-terrible thing to come about: Thunderbolts.  In the wake of the Avengers disappearance, a new super-team arose, and in one of the decade’s most shocking twists, were revealed at the end of their debut hero to not be heroes at all, but rather the Masters of Evil in disguise.  Former Masters of Evil leader and Captain America foe Baron Zemo became the patriotically-themed Citizen V.  And, following up on last year’s Songbird figure, we’ve gotten a Citizen V to go along with her.

Citizen V is figure 5 in the first Endgame-themed series of Marvel Legends.  Given his real identity, he’s not the worst choice in the world for this assortment, even if Zemo’s not actually in Endgame.  I mean, at least he *is* an MCU character, and with the Songbird figure last year, there’s a good precedent.  The figure stands 6 1/4 inches tall and has 32 points of articulation.  Like yesterday’s Nighthawk, Citizen V is built on the Bucky Cap body, which definitely a good choice, given it’s the same body that the basic Zemo was built on as well.  He’s specifically built on the recent Daredevil variant of the body, meaning he has the wrapped hands and laced up boots, which are a good match for Citizen V’s design.  He gets a new head, belt, and cape piece as well, which completes the appearance nicely.  I particularly like the head, which is nice and sleek.  The cape is also a rather nice piece, though the nature of how it’s laid out is rather

restricting for his left arm.  Of course, given that his sword hand is his right one, it’s not a huge loss.  I’m willing to sacrifice movement for form on this one.  The paintwork on V is some solid stuff.  I really dig the metallics on the shoulder pads, as well as the accenting on the red sections.  There’s some notable slop on the cape at the edges, which I wish wasn’t quite as obvious, especially given the quality of the rest of paintwork.  It’s really the one downside to an otherwise really strong figure.  Citizen V is packed with his sword, which is a decent enough piece, though he has a little bit of trouble holding it.  Still, a cool piece nonetheless.  He also includes the right leg of the Thanos Build-A-Figure.

While I didn’t read Thunderbolts back when it was new, I’ve always kind of dug Citizen V’s design and have long thought it would make for a good figure.  I was definitely hoping to see it turn up when we got Songbird last year, and I was happy to see him show up.  He was pretty high on my list for this assortment, and I definitely had high hopes.  The paint on the cape is annoying, but beyond that, I do really like this figure, and I look forward to the possibility of getting more members of the original Thunderbolts.

Citizen V was purchased from All Time Toys, and he’s currently in-stock at their store, here. And, if you’re looking for other toys both old and new, please check out their website and their eBay storefront. 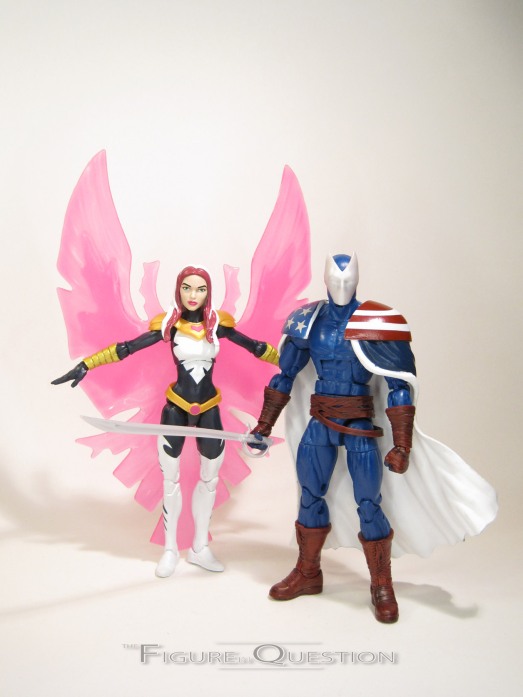 Mattel’s Marvel Super Heroes: Secret Wars is a strange beast.  It’s one of the earliest examples of true cross-media promotion when it came to action figures and comics, since Marvel essentially created a giant cross-over event out of whole cloth simply to give Mattel a slightly easier time of marketing the toys.  But then, Mattel, being Mattel, went and made some really odd choices.  Despite Marvel purposely filling the comic with many of their heaviest hitting heroes and villains, and wrapping them in a neat and tidy package with a bow, Mattel’s character choices for the series are beyond odd.  Sure, there are the clear hits like Spider-Man, Captain America, Iron Man and Wolverine, but Marvel mainstays like the Fantastic Four, the X-Men, and the Hulk were absent, while many minor and in some cases rather recent additions to the Marvel ‘verse were released, despite playing no part in the actual comic Mattel specifically requested to have as a tie-in.  One such character was Baron Helmut Zemo.  The character was not a part of the Secret Wars event, and though he had appeared back in 1973, he had only taken on the Baron Zemo identity seen here in ’82, just two years prior to this figure’s release.  He wouldn’t even truly become a major player in the Marvel universe until three years later, during The Avengers “Under Siege” story arc.  An odd choice.  Still, he got the figure, and now, 33 years later, it feels a little less odd to have a Zemo figure.

Baron Zemo was released in the second series of the Marvel Super Heroes: Secret Wars line.  As noted above and like everyone else in the series (barring the Black Costumed Spider-Man), he played no part in the Secret Wars maxi-series.  Interestingly, though this figure is clearly meant to be Helmut, the second Baron Zemo, and the back of the package lists his identity as such, the short comic on the back of the box presents a Zemo that far more resembles Heinrich, Helmut’s father.  This was hardly the only discrepancy of this nature in this line, of course.  The figure stands about 4 1/2 inches tall and has 5 points of articulation.  Unlike Daredevil and Spider-Man, who’s presence in this line-up seems to have mostly been due to the low number of new parts needed, Zemo actually got an impressive selection of new parts.  The torso is the same basic piece seen on several of the other figures I’ve looked at, but the arms, legs, head, and belt add-on were all unique to this figure.  The new pieces of course are all still victim to the very simplistic style of this line, but Zemo looks passable enough.  There’s some mild texturing on the fur bits, and the folds on the sleeves are rather believable.  The head looks to just bee a slightly re-worked Spider-Man head, but that’s actually not an unfair re-tooling.  A basic masked head is a basic masked head.  In terms of paintwork, I suppose Mattel can have points for effort on this guy, but that’s as far as I’m willing to go.  The colors are okay, but the contrast between the mask and the jumpsuit is not as drastic as it should be.  There’s quite a bit of slot, and fuzzy lines all over the place.  Similar to what we saw on Daredevil, the black detail lines seem to start and stop wherever they please, with little regard to aesthetics.  His neck, for instance, has no details, making for a jarring break from the face and the shoulders.  Likewise, the lines have a clear break above his headpiece, which has the unintended effect of making him look like he’s got a bit of a receding hairline.  For accessories, Zemo was given one of the blasters included with Dr. Doom, as well as, what else, a goofy lenticular shield, like the ones included with every other figure in the line.

You know how I keep claiming I never intended to really collect this line?  I think I’ve officially lost the battle, because this is the first figure I’ve bought with no real rationalization.  I got Iron Man because it was the only way to get the classic armor at the time.  Wolverine was $1.  Cap was because I like the character, and wanted him to go with Tony.  Doom and Kang were cheap.  Daredevil and Spider-Man were gifts.  Zemo?  I bought Zemo because I wanted to buy Zemo.  I picked him up from Yesterday’s Fun during the holiday season.  He’s the most I’ve ever personally spent on a Secret Wars figure (which, to be fair, was still a lot less than I’ve paid for most of my Super Powers figures).  Zemo’s what I’ve come to expect from this line: a slightly sub-par figure with a disproportionate amount of charm.  The average collector might not get a lot out of him, but to a hardcore collector like myself, there’s some nice history. 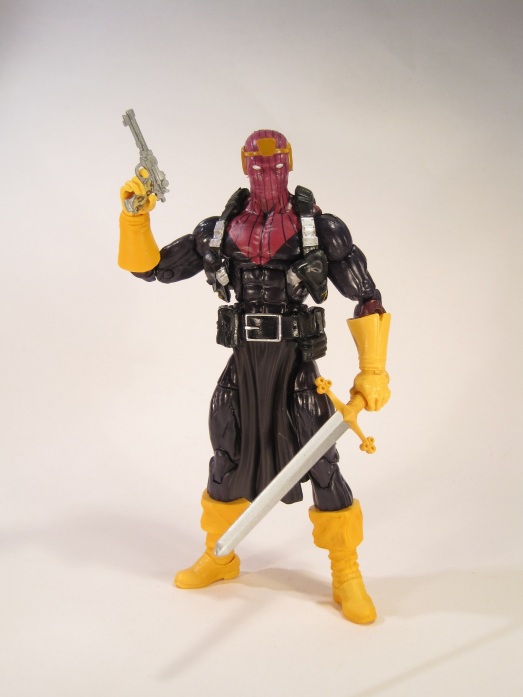 If you’d told me a few years ago that two of my favorite lines of toys (Star Wars: The Black Series and Marvel Legends Infinite Series) would be coming from Hasbro, I’d have laughed in your face. I’ve never hated Hasbro or anything, and I’ve been pretty happy with their work on Marvel Universe, but they’ve never been known for anything downright outstanding. In the past year, they’ve really stepped it up in terms of sculpts, articulation, accessories, and general quality of figures. Sure, they’ve had a few missteps (re-packing Han in the third series of SWB instead of an extra Stormtrooper; making Black Widow, the Hydra Agent, and the A.I.M. Soldier one per case), but they do seem to be learning, and they actually are trying to make up for some of their failures. That’s down right admirable, especially after years of dealing with Mattel…

Today, I’ll be reviewing Baron Zemo from their recent Captain America: The Winter Soldier Marvel Legends Infinite Series. Unlike yesterday’s Cap, he’s based on a comic design, and if you’d like to know more about him, head over to the Backstories section!

Baron Zemo, or “Soldiers of A.I.M.” as he’s officially named, is part of the first series of Captain America: The Winter Soldier Marvel Legends Infinite Series and is also in the first revision case featuring series two. He is a swap figure with the A.I.M. Soldier, hence the name. The figure is a little over 6 inches tall and sports 32 points of articulation. He’s based on Zemo’s more recent appearances. It’s honestly not far off from his classic design, sans the fur-lined boots and shoulders. The figure is built on Hasbro’s medium male buck, with flared boots and gloves. He also gets a new head and add-ons for his shoulder holsters and his belt/loincloth. The head is a perfect representation of Zemo’s look in the comics, and the body and add-ons look great too. I quite like the “Z”s embroidered on his holsters. They’re a nice touch. Like STRIKE Suit Captain America, the figure’s sculpt is let down a bit by some rocky paint apps. The forearms have been molded in yellow and painted purple, and not only did they miss some of the spots closer to the gloves, the paint also seems to be a bit too thin, allowing the yellow plastic to bleed through. The edge of the mask also has some pretty fuzzy lines, the whites of the eyes aren’t quite in line with the sculpt, and his crown piece isn’t totally painted. None of these are major issues, but they are annoying, and they detract from an otherwise great figure. Zemo includes a pistol, a sword, and the right arm of the Mandroid. I’ll be taking a look at the Mandroid after everyone else is reviewed, which leaves the gun and sword. The sword sadly suffers from similar bleed through issues to the forearms, but it fits well in his hand, and can also be slipped through the loop on his belt. The pistol is a nice piece, which has some great painted details. Sadly, he’ll be forced to always hold it, because both of his holsters have permanently sculpted guns. Drat it!

Zemo was part of the set of Series two figures I received from Big Bad Toystore. I wasn’t sure I was going to get him at first, as I wanted the A.I.M. Soldier a bit more. However, he was in the set, and I figured why not? I’m glad that was my attitude on the figure. Paint issues aside, he’s a great figure, and a very welcome addition to anyone’s Captain America shelf.