Remember two weeks ago when I reviewed Baymax?  And two weeks before that when I reviewed Yokai?  Well, it looks like I’ve got a recurring feature up in here!  I mean, at least until I make my way through this stack of Big Hero 6 figures that I’ve got sitting here.  Big Hero 6 is ostensibly an ensemble piece, but at the forefront of that ensemble is Hiro Hamada, who’s the group’s central figure.  I’ll be looking at his action figure today!

Hiro was released in the first series of Bandai’s Big Hero 6 line, alongside the rest of the team.  The figure stands about 3 1/4 inches tall and has 15 points of articulation.  Remember when I reviewed Yokai and I noted that he was way too small?  Well, Hiro’s got the opposite issue going on:  he’s way too tall!  Hiro’s not that big a guy.  Going by the scale offered by this line, he’s almost 6 feet tall, since he’s only marginally shorter than the likes of Yokai and Baymax, or even Wasabi.  On the plus side, at least Hiro keeps his internal proportions more or less intact, thus avoiding one of Yokai’s major issues.  In fact, his sculpt is pretty darn solid in general.  He looks like Hiro does in the movie, has solid proportions, decent detail work, and his joints are even worked-in pretty well!  Even the paint work doesn’t let this guy down; he’s got one of the best paint jobs I’ve seen on an item from Bandai America.  The colors all match up nicely with their on-screen counterparts, there’s plenty of small detail work, the application is clean, and there aren’t any overlooked details in the sculpt (like what we saw on the Baymax figure).  It also looks like this paint is a bit less likely to chip over time than some other Bandai America figures, but only time will tell on that one.  Hiro is packed with Baymax in his offline form; the piece is hollowed out, but it’s still a nice enough extra, especially when you consider that a lot of the line is largely un-accessorized.

Can you guess where I got Hiro?  If you guessed Ollie’s, the same place that I got the last two Big Hero 6 figures I reviewed, you would be correct.  I almost didn’t find the normal version of this guy and would have settled for his Stealth variant from the second series, but Super Awesome Girlfriend found this one all the way at the back of one of the racks.  Despite the annoying scale issues, Hiro is actually a pretty nice figure, and certainly one of Bandai America’s best offerings. 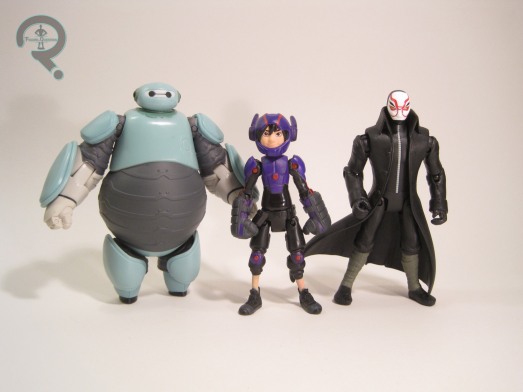