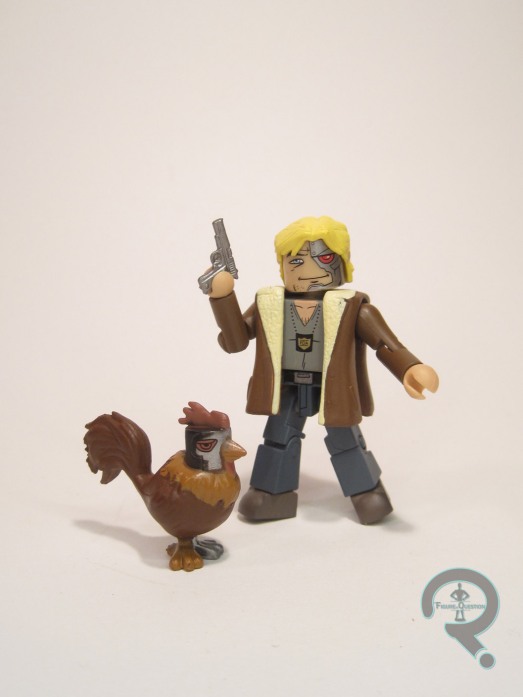 “Tony Chu’s partner John Colby was badly injured and given cybernetic implants. Now able to talk to machines, he was partnered with the ferocious fighting rooster Poyo at the USDA.”

Twice now, DST has tried their hand at independent comics-based Minimates.  Neither time has been notably successful, but most recent was at least a bit more expansive and well-thought out.  This time around, they did four two-packs, each one based on a particular book.  Amongst the allotment of titles was Chew, John Layman and Rob Guillory’s food-based series from Image Comics.  Today, I’m looking at half of that particular set, Agent John Colby. 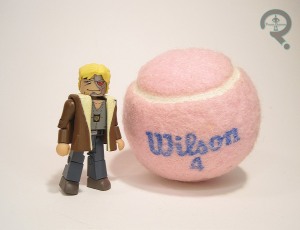 John Colby was originally packed with his partner Tony Chu, as part of the one and only series of Comic Book Heroes Minimates.  He’s based on Colby’s post-cyborg appearance, which is by far the most exciting look.  The figure stands 2 1/4 inches tall and he has 14 points of articulation, being based on the standard Minimate body and all.  He’s also got add-ons for his hair and jacket.  Both are re-used, with the hair coming from DC Series 7’s Nightwing and the jacket coming from Marvel Series 52’s Street Fight Wolverine.  They make for a pretty solid match for Colby’s comics appearance, and are just solid pieces all around to boot.  The paintwork on John is pretty sharp work.  Guillory’s lifework translates pretty well to the Minimate aesthetic, and makes for a very nice looking ‘mate.  The colors are bright and bold, and the cybernetic section of his face is well detailed as well.  He’s got a friendly sort of a smile, which seems to suit the character.  Colby includes a pistol, a display stand, and the ferocious fighting rooster Poyo, who is also in his post-cyborg form.  Actually a pretty awesome selection there.

I got John during Luke’s Toy Store’s Black Friday sale last year.  He was just being sold on his own, without his partner.  I must admit, I bought the first trade of Chew many years back and never actually fished reading it, so I’m only marginally familiar with the character.  Never the less, I found this ‘mate pretty darn cool looking, and I’d actually been eyeing him up for a little while now.  Not a bad ‘mate at all.