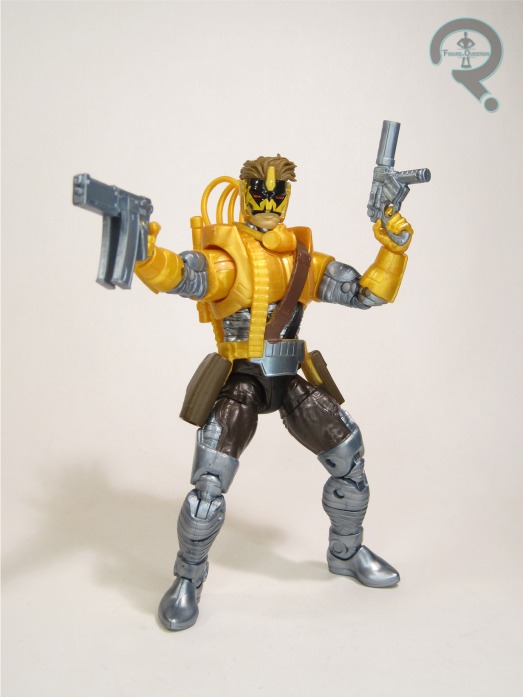 “Maverick absorbs the force of enemy attacks, converting it into hyper-concussive blasts of power.”

Hiiiiway through the danger zone!  Oh, sorry, wrong Maverick.  This one’s significantly less Tom Cruise-y.  Though, I bet he still plays a pretty mean game of volley ball.  It’s been quite a while since I reviewed a Maverick figure.  In my defense, that’s because there really aren’t a lot of them out there.  But now there’s one more, so that ups the quantity of Mavericks by about 30% or so.  Aggressive expansion and all that.  He’s very, very ’90s, so that does make him ripe for the picking in regards to the current Legends line-up, and, well, here he is, right?

Maverick is figure 4 in the Strong Guy Series of Marvel Legends.  While Black Tom eschewed the ’90s trend, Maverick is squarely in the middle of it.  He’s perhaps the central piece of it, really.  He’s Maverick.  Sorry, wrong Maverick again.  This assortment is really a mid-point between Deadpool and X-Force, and Maverick’s connection to both of those things is pretty tangential.  I suppose he and Deadpool are both products of Weapon X, so there’s that.  If it gets me a Maverick, I won’t complain about the circumstances.  The figure is almost 7 inches tall and he has 31 points of articulation.  The nature of Maverick’s design is that it’s somewhat restricting to movement.  Subsequently, that translates to this figure, especially when it comes to the elbows.  That being said, he still manages to be quite posable, and Hasbro’s definitely done their best with most of the articulation implementation.  He can even move his head mostly unimpeded, which is awesome for a Maverick figure; the ’90s figure didn’t even try on that one.  Maverick is sporting an all-new sculpt, which I was actually a little surprised to find out.  I had just assumed he’d be making use of some of the

Deathlok tooling, but that’s not the case at all.  That means his sculpt isn’t playing double duty, or aiming for close enough, resulting in a figure that’s a quite solid recreation of Maverick’s original comics design.  For the most part, I’m a really big fan of how the sculpt works.  The details are clean and sharp, and I love how well they’ve captured his mop of ’90s hair under neath of the helmet.  The only part I’m not much of a fan of is the collar piece, which is a free-floating add-on piece for some reason, rather than being properly attached.  It doesn’t stay in place very well at all on my figure, and ultimately, I just kind of prefer him without it.  It would be nice if it could at least tab in or something to keep it in place.  Maverick’s color work is pretty decent overall.  The gold goes more orange-y than what we saw on the ’90s toys, but I actually think it looks pretty good.  It feels more in line with his comics depiction this way.  The actual paint application is decent overall, though there’s some slight bleed over from the mask to the face.  Due to the layout of the mask, though, it’s not terribly noticeable.  Maverick is packed with two different guns.  The smaller (based on the Nerf Vortex Proton; thanks Tim!) can be stowed in his holster, but he’ll just have to always be holding the other one.  He’s also packed with the left arm of Strong Guy.

I have a perhaps somewhat irrational love of Maverick.  There’s never been much to the character, but I always thought he was really cool on X-Men: The Animated Series, and I tended to have him on my team whenever playing X-Men: Under Siege board game as a kid.  His ’90s toy eluded me until I was an adult, but I was super excited when he was announced for this line, and he was definitely my number one want from this line-up.  I’m very happy with this figure, and he turned out even better than I was expecting really.  A very solid offering.

Thanks to my sponsors at All Time Toys for setting me up with this guy for review.  If you’re looking for Marvel Legends, or other toys both old and new, please check out their website and their eBay storefront. 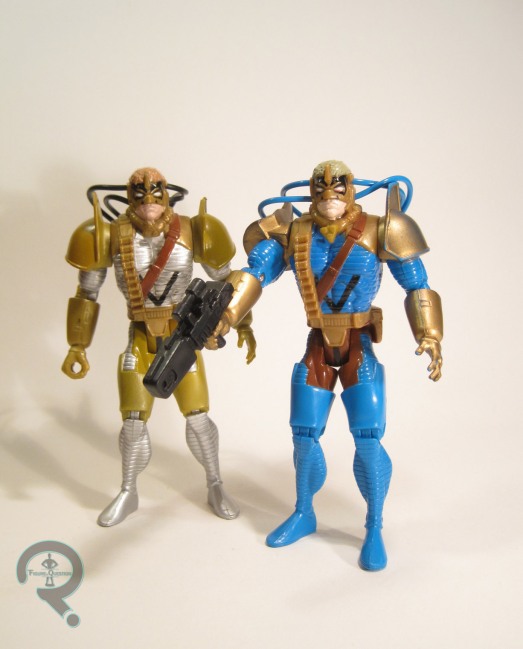 “A secret agent formerly allied with both Wolverine and Sabretooth, Maverick is as tough a customer as they come! A master strategist and martial artist, Maverick is one of the foremost mercenaries in the world, accepting any assignment… as long as the price is right! With both espionage skills and the mutant ability to absorb kinetic impact, Maverick is a hard man to keep down indeed!”

Maverick is about as ‘90s X-Men as a ‘90s X-Men character can get.  Shoulder pads? Check.  Former ally of Wolverine?  Check.  Sketchy past?  Check.  Single word name picked purely because it sounded cool?  Check.  Vague power set that ultimately translates to “has a big gun”?  That’s a bingo.  Of course, like a lot of uber ‘90s X-Men characters, I have something of a soft-spot for the guy, given his presence in both X-Men: The Animated Series and the corresponding X-Men toyline from Toy Biz. 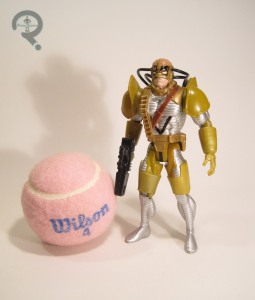 As you’ve probably pieced together from the intro, Maverick was released as part of Toy Biz’s ‘90s X-Men line.  There are two versions of Maverick available, and there’s a bit of a saga behind those two figures being released.  The gold and silver Maverick was originally slated for release in Series 5 of the main line, as a replacement for the cancelled Gauntlet/Barrage figure.  However, Maverick himself was cut from the line up rather early on in the process, and bumped to the next series, whose line-up he remained a part of long enough for his prototype to be in the line-up shot that was meant to go on the figure cardbacks.  He was dropped from this assortment as well, and his prototype was hastily cut out of the Series 6 photos (you can actually still see his gun overlapping Morph’s hand on the card backs).  This version would eventually see release alongside Series 6’s Trevor Fitzroy in a KB Toys-exclusive two-pack, but did not see a single-carded release.  The single-carded Maverick is the  blue version seen above, and he was released as part of the “Mutant Genesis” series, two years after he was originally supposed to hit retail.  That seems like a whole lot of trouble to go through for Maverick, but I guess it’s nice he finally made it out.  Both figures share the same mold, and thus both figures stand about 5 1/4 inches tall and have 8 points of articulation.  The sculpt is a pretty decent one, overall.  It’s very similar to the other ’93-’94 X-Men figures stylistically, meaning he’s not quite as large and exaggerated as some of the later figures would become.  He’s a little on the stiff side (which was common to a lot of the figures from this point), which isn’t really helped by his lack of neck articulation.  However, for a character like Maverick, who was usual fairly rigid in his movement, it’s not terrible. The sculpt captures Maverick’s (admittedly rater unattractive) design rather nicely, and offers some rather intricate work on the various small details of the armor.  The cables are a softer material, which I suppose would be cool if he had neck articulation, but since he doesn’t, it’s a nice thought that doesn’t amount to much of anything.  At least they tried?  The rest of the figure is done in a much stiffer plastic, which means that his shoulder pads can break if you’re not careful (you can see this breakage on gold/silver Maverick’s left shoulder).  Paint is, of course, the divergent bit of these two.  The original one was gold and silver, and more or less follows Maverick’s design from the comics.  There are a few spots where paint is obviously missing, but he’s generally a good match for his 2-D counterpart.  The second figure opted to replace the silver parts with blue, for…reasons?  I don’t believe this follows any established look for the character, and it looks a bit off.  It wouldn’t be so bad if the blue were a more subdued shade.  Some of the missing paint from the first figure is corrected here, but a few other bits are lost, making for a pretty equivalent trade.  While the blue color scheme is generally fine as its own thing, the one part I’m not much of a fan of is the hair, which goes from a rather believable dirty blond to some sort of off green/grey sort of thing.  Yuck.  Both figures originally included a gun; silver for the gold/silver figure, and black for the blue figure.  It fits in his right hand, and is worked into his “quick-draw” feature, which swings his arm downward when you press the lever on his back.

Maverick is another more recent purchase.  I always wanted one of these two, but I just never found one in-person.  I ended up finding the blue version at Bobakhan Toys on my way out of Seattle this summer.  At the time, I lamented that they didn’t have the silver one, and then two days later I ended up fishing him out of a $1 bin at Pop Culture Exchange, which was pretty cool.  Even without owning him as a kid, I’ve always had a bit of sentimental attachment to the character, due to his inclusion in the board game X-Men Alert, where he was very frequently on my team.  Neither Maverick figure is perfect, but they’re both still pretty fun, and I’m happy to have been able to add them both to my collection.