BATMAN: MASK OF THE PHANTASM (KENNER)

As I’ve brought up on this site, my favorite Batman film of all time is easily Batman: Mask of the Phantasm, the Animated Series’ cult classic theatrical feature. It’s an impressively crafted story, and actually does a phenomenal job of actually salvaging some of the elements of the rather messy Batman: Year Two story.  The story’s original antagonist, Reaper, was reimagined as the titular Phantasm, a chilling and truly intimidating villain.  Unsurprisingly, the Phantasm got some toy coverage in the tie-in line, and I’m looking at that figure today!

Phantasm was released as part of the Mask of the Phantasm tie-in line in 1994, and was really the main focus figure in the line-up.  I know, what a shock.  What was also *supposed* to be a surprise was the Phantasm’s identity, which was to be hidden under the figure’s mask in the package.  However, for some reason, someone at Kenner thought it would be a much better idea to instead package the mask off of the figure, thereby revealing the Phantasm’s secret identity before the film even hit theaters.  Yay.  The figure stands 4 1/2 inches tall and she has 4 points of articulation.  The Phantasm’s sculpt was all-new, and, well, it’s technically a little bit compromised.  It’s not entirely Kenner’s fault, to be fair.  In the film, the reveal that the Phantasm is really Andrea Beaumont is hidden by the fact that the two character’s designs sport almost entirely different builds.  It’s a total cheat in the movie, and not something that’s quite so easily rendered in three dimensions.  For the purposes of this figure, Kenner opted to sculpt Andrea as she’s seen post-reveal, and then provide add-on parts to approximate the Phantasm design.  Ultimately, it’s a compromise, but it’s probably the optimal compromise.  The underlying figure is a pretty solid recreation of Andrea’s design.  The head in particular is a good match to the model.  Technically, for true film accuracy, she shouldn’t have the glove on her right hand, but I’m ultimately not too bugged by the added symmetry.  Phantasm’s paint work is pretty basic, but a decent match for her colors in the movie.  There’s no odd color changes this time around, so she’s nice and screen-accurate.  Phantasm is packed with her mask/hood and cape, which slips nicely over the head, and her scythe attachment for her hand.  They make for a passable, if perhaps not quite as intimidating, recreation of the primary Phantasm design.  The figure also originally included a gun because, you know, gun, right?  Mine doesn’t have that piece, which, you know, is just such a bummer, right?

I didn’t get the Phantasm when she was brand new, mostly due to being just shy of being only enough to actually see the movie.  Also, when I finally did see it, she kind of scared the crap out of me, so I held off for a bit longer.  Ultimately, I ended up getting her as a Christmas present from my parents a few years later, and she’s stuck with my collection  since.  While the figure obviously isn’t a pitch perfect recreation of the film design, I’ve still always found it to be a really fun offering, and certainly one of my favorite Animated pieces.

Batman definitely holds the record for number of theatrical films based on a single superhero. It’s not a huge surprise, given the character’s mass appeal. There have been a whole lot of tries at doing the character justice on the big screen, and exactly which one is the “best” is very much up for debate. I must admit, I cheat a bit when asked what my favorite theatrical Batman movie is, my answer is always Batman: Mask of the Phantasm. A lot of people forget about this one (due to lots of people writing it off based solely on its animated nature), but for me it’s the best Batman movie by far. Seriously, if you haven’t seen it, you really should. Like right now. Go watch it. No seriously, Imma spoil stuff and I don’t wanna ruin it for you. I’ll wait. Anyway, as an extension of Batman: The Animated Series, the film’s been privy to a few figures here and there, including getting a two-pack courtesy of DC Collectibles’ current line.

Batman and the Phantasm were released as part of the Batman: Animated line in mid-December of last year. Both figures are exclusive to this particular set. 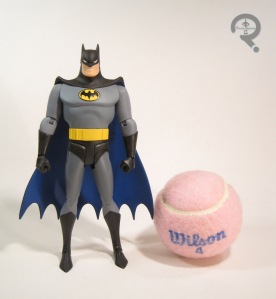 Faithful readers will no doubt find this figure somewhat familiar. Yep, I’ve taken a look at most of this figure before, back when I looked at the single-packed Batman from Series 4 of the main line. Since Batman’s design from the movie is identical to that of the show, it’s a sensible re-use, though it’s a bit frustrating to people who picked up the earlier figure and still want the Phantasm (like me). From the neck down, this figure is 100% the same as that figure. The proportions are still more or less spot-on, but he’s greatly hindered by the lack of swivel joints at the tops of his boots. The main difference between the two figures is the head. This version is a bit more expressive, with gritted teeth and eyes opened wider. It’s also a much better attempt at the design. The head’s a little wider, the eyes are bigger, and the jaw’s squarer, which all results in a generally better looking end-product. The paint is more or less the same. I did find the general application to be a bit cleaner this time around, but your mileage may vary. Another change between the two figures is the accessory complement. This figure only gets the batarang, a pair of hands for holding the batarang, a pair of fists, and a display stand. The stand is mostly the same as the prior one, but trades the B:TAS logo for a Mask of the Phantasm one.

Now we get to the real draw of the set. The Phantasm was actually not a wholly original creation of the film, but was instead a retooled version of the villain Reaper from the “Batman: Year Two” storyline from the comics. The less said about the original story the better. The figure stands just over 6 ½ inches tall and has 23 points of articulation. This marks only the second time the Phantasm has appeared in plastic form. The first time, the figure was given a removable hood and scythe, allowing for (20 YEAR OLD SPOILER!!!!!!) her to double as an Andrea Beaumont figure. Since the two designs in the film are purposefully dissimilar, this meant compromising the appearance of the Phantasm in order to have a decent Andrea. This figure foregoes any sort of Andrea connection, and instead opts to present the Phantasm in as screen accurate a manner as possible. Well, in theory, anyway. The end result is pretty good but a bit shy of perfect. Let’s talk about what works first. The underlying head is great, are both hands/gloves. The body is generally decent. It’s not a perfect match, but Phantasm’s proportions changed a bit in the movie, so it’s forgivable. Even the base of the cape isn’t too bad. What hold’s this figure back is the hood. In the film, it has a very distinct, very sharp look about it. Here, it’s a soft rubber piece, attached to the rest of the cape. It ends up being kind of shapeless and too soft. I think it would have looked much better had it been separate from the cape and attached to the head, ala the smaller scale Kylo Rens that Hasbro’s released. As it stands, this doesn’t look atrocious (especially if viewed from a slight angle) but it could have been a lot better. Also, the quality of the rubber used for the cape/hood is a bit questionable, and it feels like it’s already starting to deteriorate, which isn’t super comforting. The paint on the Phantasm is pretty simple, but not bad. The various details are all pretty clean, and she’s appropriately mono-chromatic, so that’s good. The figure includes two hands, one in a fist and one in an open gesture, as well as a display stand. That seems a little light, and I certainly wouldn’t have minded some sort of piece to show off her ghostly gas cloud thingy. 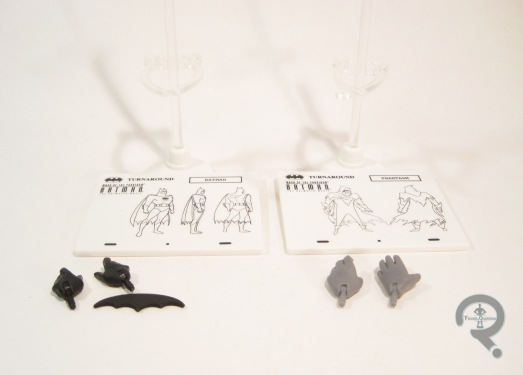 I picked this set up from my local comic book store, Cosmic Comix, in early January. I had actually seen it at another store in December, but passed on it for a number of reasons. While I don’t feel the set is as strong as it could have been, I’m glad I have it. Batman’s a definite improvement over the single-release, and the Phantasm is a sound addition to the line. Now, how about a follow up set with an unmasked Phantasm and a battle-damaged Joker?