When I say “horrific,” you say “death!”  Ah, yes, what better way to start out a Prowl review than by putting all of the potential Prowl fans reading up in arms immediately?  You know, by reminding them of the horrifying, fire out of the eye-sockets, death that befalls him in Transformers: The Movie‘s opening minutes?  Man, didn’t that suck?  It’s okay, I think people may have gotten over it.  They’ve had 33 years.  Well, I mean, I haven’t.  I’ve had a few months, because that’s when I finally saw the movie.  Of course, since the movie is also my only real exposure to Prowl in media, I guess it’s a bit of a wash.  Whatever the case, I’m reviewing a Prowl figure today.  So there. 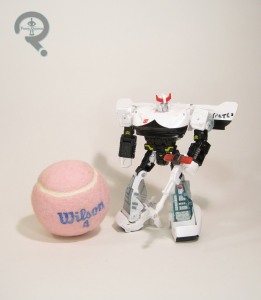 Prowl is the third figure in the second deluxe wave of War for Cybertron: Siege figures, joining fellow ’84-er Ironhide.  Prowl is another classically inspired design, though he does sport the most signs of Cybertronian design work peeking through.  In robot mode, Prowl stands 5 1/4 inches tall and he has 22 practical points of articulation.  When I initially saw photos of Prowl’s robot mode, I thought it looked a little bit lacking.  Something about it seemed a little slapdash and unfinished, especially those lower legs.  Certainly he seemed like he’d be a step down from his comrades.  Well, hang on there guys, because I was actually quite wrong.  Prowl’s sculpt is definitely one of those that needs to be seen in motion to truly appreciate.  It’s actually  pretty clean, sleek design, that holds together nicely.  Sure, the legs do seem a little hollow, and if you catch the torso at the wrong angle, it’s not going to look so great, but when this guy is posed well, he looks really, really nice. And speaking of posing?  Yeah, for my money, Prowl is rivaled only by the Voyager Optimus in terms of range of motion.  There’s a lot of poses to be had with Prowl, and

they only help to further improve the look of his sculpt.  Prowl’s traditional alt-mode is a police car, and this figure experiments with that.  Like Sideswipe, Prow has to somewhat tweak things and get a more sci-fi influenced version of his classic alt-mode, something that maintains the spirit of his original design, but doesn’t feel out of place with the new setting.  I actually really dig the alt-mode here, and I think it’s really one of the ones to best capture the Cybertronian feel. I particularly dig those translucent wheels! Also, this marks the easiest transformation I’ve dealt with on these guys.  I didn’t need to consult the instructions at all, and it feels nice and smooth the whole way.  He’s definitely one I can see myself swapping back and forth pretty frequently.  Prowl is packed with a W-45 Acid Pellet Strikeblaster…which is a gun with the light bar from his alt-mode strapped to it.  It’s goofy as hell, but a fun piece nonetheless.

Okay, Max got off the hook yesterday, but he most certainly does *not* today.  See, I was on the fence with Prowl, because of the slightly odd look in the promo shots.  But then Max got his early, and let me mess around with the figure a for a little bit.  It was really, really nice, and I absolutely couldn’t turn him down when I finally had my chance to get one.  I gotta say, I don’t have a huge attachment to the character, nor was I expecting much out of this figure, but he’s kind of my favorite figure from this assortment.  He’s just so much fun.

Prowl came from All Time Toys, where he is still currently in stock, here.  If you’re looking for Transformers, or other toys both old and new, please check out their website and their eBay storefront.