“Their remote location makes the spaceports of Tatooine havens for the varied masses from across the galaxy. At the seedy Mos Eisley spaceport, this variety is more than evident at the main hangout, Chalmun’s Cantina. The most loathsome of Mos Eisley’s population can regularly be found there, including imperial sandtroopers, who are deployed by the Empire to quell outbursts with brutal efficiency. In the days before the Galactic Empire, the spaceport of Mos Espa hosted a similar reputation as a “wretched hive of scum and villainy.” From the outdoor markets to the junk shops – overseen by the gambling crimelords, the Hutts – Mos Espa was a place where a nine-year old boy could learn the ways of the universe.”

Hey, remember how I’ve got all these Power of the Force figures I can review?  Great, I don’t have to remind you why I’m doing this review, then.  I’ve looked at all manner of Stormtrooper variants, many of them from this very line, but today I’m kind of doubling back and looking at a variant of a variant.  Oh man, how crazy is that?

The Sandtrooper was released in 1998, accompanying a 3D display diorama of the Mos Eisley Cantina.  He was the actual figure used to sell a bunch of cardboard, wrapped in cardboard.  Neat trick, I suppose.  We had gotten a standard, run of the mill Sandtrooper in the main line, but this one aimed to be different enough to make collector’s buy.  Guess it worked.  According to expanded universe materials, this guy actually has a name.  He’s Davin Felth, the trooper who says “Look sir, droids!” while they’re searching on Tatooine.  And now you know that.  Don’t you feel like your life has meaning now?  The figure stands 3 3/4 inches tall and he has 6 points of articulation.  He uses the same head, torso, and pelvis as the single-carded Sandtrooper, but gets a new set of arms and legs.  It’s still the super goofy PotF2 trooper build, but by this time things were starting to be a little bit more toned down.  Those arms and legs are definitely less bulked up compared to prior troopers.  His pose is also a more neutral one, but, in an interesting turn of events, he’s not really able to do anything but hold that one neutral pose.  He looks like he’s standing guard (which makes sense for the playset he came with), meaning he’s designed to hold his weapon in a non-battle stance.  He can’t actually hold it by the handle, due to the relative posing of his arms.  The paint on this guy is also toned down from the prior Sandtrooper.  He’s still got a little bit of weathering, but it’s nowhere near as intense.  His pauldron has changed colors to mark a change in rank, with it being white instead of orange.  For some reason, the black section has also changed to a light grey, which is an odd choice.  Moving further down, the figure has also lost the black detailing at the elbows that prior troopers had, which does look a little weird.  The Sandtrooper was packed with a blaster rifle and a patrol droid (missing from mine) which plugged into his back.

As part of my goal of getting all the figures from the PotF2 line, I’m having to track down some of the more odd-ball releases as well, which includes this guy.  I ended up getting ahold of one from a loose collection that was traded into All Time, though he was missing the droid piece.  He’s not a bad figure.  I actually like him quite a bit, certainly more than I was expecting to.

As I noted above,  I got this guy from my friends at All Time Toys.  They’ve got a decent back stock of Power of the Force, and other cool toys both old and new, so please check out their website and their eBay Store. 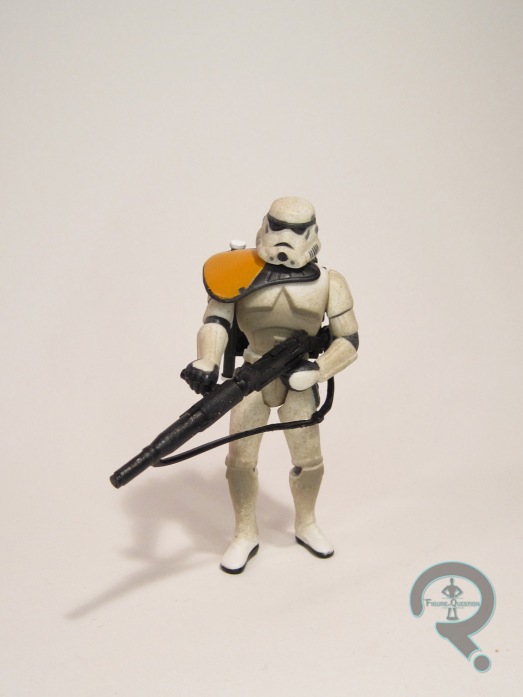 Where would the Imperial forces be without their plethora of environment-specific troops? More importantly, where would toymakers be without and endless supply of Stormtrooper variants to keep selling in rotation from now until the end of time?  They’d definitely have to get a little more creative, to say the least.  Interestingly enough, the Sandtrooper, the very first climate-specific Trooper wasn’t initially recognized as it’s own separate thing for quite some time, so it wasn’t until the ’90s that it actually got an action figure.

The Sandtrooper was released in the 1996 assortment of Kenner’s Power of the Force II line.  As noted in the intro, this was the first time the design was released as a figure.  In fact, it was such an uncharted area that initial releases weren’t even called Sandtroopers.  They were “Tatooine Stormtroopers.”  Pretty crazy, right?  The figure stands 3 3/4 inches tall and he has 6 points of articulation.  Given the similarities between the two designs, you might think the Sandtrooper re-used a lot from the basic Stormtrooper.  Not the case, though.  Apart from the head and pelvis, the two figures are unique.  I mean, they still are clearly styled from the same basic look, and are the same figure in differing poses, but the two figures maintain mostly unique tooling nevertheless.  The PotF2 Stormtrooper is, of course, one of the goofiest, most 90s-ified figures in the line, so this guy follows suit.  I will give him this, though: he’s at the very least designed to actually hold his weapon two-handed.  It would be a little while before a standard Stormtrooper got that.  Similarities in design aside, the paintwork is the real dividing line between these two figures.  The Sandtrooper is, appropriately, covered pretty much from head to toe in sand.  Seriously, he’s just a real mess.  The figure handles this very nicely, making use of an airbrushed sort of look, which helps to keep him looking quite worn-in.  You definitely won’t be mistaking these two for each other, even without the orange pauldron.  The Sandtrooper is packed with a removable back pack, and a rather large blaster rifle, that, as noted above, he can actually hold the proper way.  Yay!

The Sandtrooper is another figure in the ranks of Power of the Force figures I had access to but did not technically own as a child.  There was one at my Grandmother’s house, meant to be shared by my cousin and me.  When the figures were split up and sent home between the two of us, the Sandtrooper went with my cousin, who’d always been more of a trooper fan than myself.  I got this particular figure from the Farpoint charity auction this past year.  He’s just as goofy as his standard issue compatriot, but that doesn’t stop him from being fun.