As an animation geek and a toy geek, Resaurus’s Speed Racer line has fascinated me for quite some time. It’s a slightly out there line, and it was easy to overlook at the time, but it’s probably one of the coolest toylines to come out of the 90s. And that’s coming from a guy who got into toys in the 90s! Anyway, they covered most of the pivotal cast members from the show, plus some more minor ones. Today I’ll be looking at one of the show’s recurring heroes, Inspector Detector, who both inspects and detects. What a value!

Inspector Detector was released in Series Two of Resaurus’s Speed Racer line. He stands a little over 5 inches tall and features 8 points of articulation. He’s based on the appearance of the character on the show. As far as I know, Inspector Detector only had the one look, so it was a pretty clear choice. The sculpt was brand new to this figure, and it looks to emulate the character’s design pretty well. In particular, they really managed to get the Inspector’s oddly shaped beard down in three dimensions, which is really impressive. Like the rest of Series Two, the Inspector has a more basic pose than the earlier figures in the line, which works in his favor. The paint work on Inspector Detector is pretty good overall, though there are a few slight areas of bleed over. The figure is accessorized with a walkie talkie, a pair of binoculars, a hand gun, a pair of hand cuffs, a police badge, and a display stand.

When I got Captain Terror and the Assassin at Balticon, it occurred to me that I was only two figures short of a complete set of Speed Racer figures. So, I tracked down yesterday’s Grand Prix Speed and the good old Inspector from a seller on ebay for a pretty great deal. The Inspector isn’t one of my favorite characters from the show, but he’s a unique looking figure, and he rounds out the set nicely. 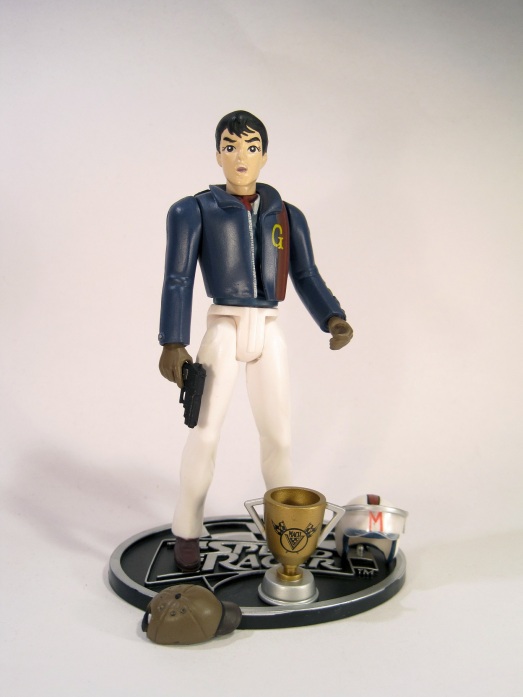 Speed was released as part of the second series of Resaurus’s Speed Racer line. The figure stands about 5 inches tall and features 8 points of articulation. The figure is NOT based on a look from the show, a trait unique to this figure. Instead, he’s a hypothetical figure, based on what the toymakers thought Speed would look like, were he to take part in the Grand Prix. The big difference between basic Speed and Grand Prix Speed is the latter’s spiffy racing jacket. It’s hard to tell, but it looks like the two versions of Speed share a torso and waist, with all the other sculpted parts being new to this figure. As a Series Two figure, he has a more subdued pose than his Series One counterpart, which actually works in the figure’s favor. The head also features a more intense expression, and generally has a better likeness to the character than the first version. The paintwork on Speed is pretty good, with no noticeable areas of slop or bleed over. I was also impressed by the Mach V logo on the back of his jacket, which looks really great. Speed includes his helmet (with a racing stripe), a hat, a hand gun, a trophy, and a display stand.

After picking up Captain Terror and the Assassin at Balticon, I figured I might as well complete my Speed Racer set. Grand Prix Speed can be a pricey figure, but I was able to track one down on ebay for a good deal. Grand Prix Speed was actually the version of the character I had wanted when I was younger, but I never saw one in person. I’m happy to have finally gotten a hold of one!

Continuing yesterday’s theme, today is another figure from the 60s cartoon Speed Racer. It’s another villainous figure, this time depicting the Assassin. Interestingly enough, they weren’t referred to assassins in the original Japanese version of the show. They were called ninja, the Japanese word for assassin. The group dubbing didn’t think the United States would get the concept, so they renamed them the more generic “assassins.” If only they’d known…

The Assassin was released as part of the second series of Resaurus’s Speed Racer line. He stands 5 inches tall and features 8 points of articulation. The figure is based on the appearance of the assassins from the episode “Gang of Assassins.” I suppose it technically counts as an army builder if one were so inclined. The Assassin features an entirely unique sculpt. The second series featured less pre-posed sculpts than the first, so the Assassin features a more generic stance. This allows the articulation to be more effectively utilized than on the figures in series one. The sculpt is an accurate representation of the look from the show, simplistic but still full of character. The highlight of the figure is his head sculpt, which perfectly captures the exaggerated proportions and expressions of a Speed Racer character. The paint work is decent overall, though the figure does suffer from some bleed over around the line between his face and his mask. The Assassin includes a handgun, a machine gun, a backpack, a rope, and a display stand.

Like Captain Terror, the Assassin is a recent addition to my collection, purchased in the Balticon dealer’s room this past Memorial Day. I’d seen this figure a few times over the years, but never got around to picking one up. He’s a pretty cool little figure, and I’m very glad I decided to finally buy one. 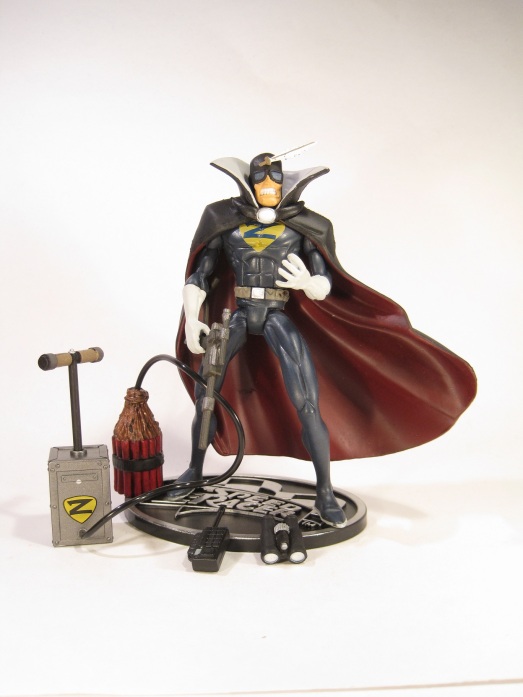 Like Ultraman, it might be a bit surprising to find out that I’m a pretty big Speed Racer fan. It’s a bit before my time, but like many other such things, I became a fan nonetheless. My dad was a fan of the show in its initial run, and this, coupled with the convenient release of Resaurus’s toyline in the 90s and my status as a bit of an animation geek led to my love of the series. Today, I’ll be looking at one of Speed’s wacky foes from the show, Captain Terror!

Captain Terror was released as part of the first series of Resaurus’s Speed Racer line. He stands about 5 inches tall and features 9 points of articulation (if you count the moving head feather, which I totally do!). The figure is, obviously, based on Captain Terror’s design from the original Speed Racer TV show. He has a completely unique sculpt, which seems to capture the Captain’s design pretty well. He is a bit more detailed than his animated counterpart, but that’s actually a point in the figure’s favor. He has a cape add-on piece, sculpted to convey his cape in a windblown state. The character was depicted in such a way at least once, so it’s a nice touch. The paint work is superb. There isn’t any noticeable slop, and he has some nice washes to help bring out some of his details. Captain Terror includes a gun, a pair of binoculars, a walkie talkie, a roll of dynamite (with a working plunger!), and a display stand.

Captain Terror was a recent acquisition for me. I picked him up from the dealer’s room at Balticon just this past Memorial Day. I actually remember looking at this figure when it was originally released, but for whatever reason I never got one. I’m happy to finally have the figure, and it’s certainly a fun addition to my collection.