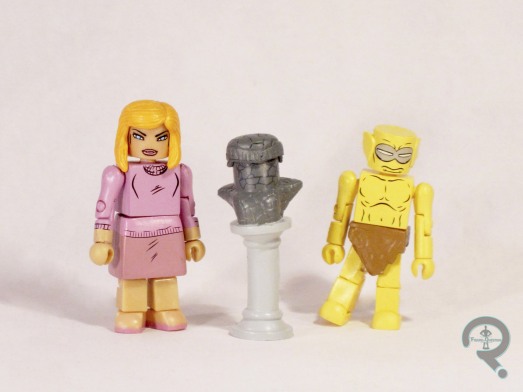 So, yeah… more Marvel Minimates.  This time around, it’s The ever-lovin’ Blue-eyed Thing’s girlfriend Alicia Masters, and her longtime nemesis the Moloid.  Okay, not really, but isn’t that more interesting than “they just happened to be packed together”?

These two were released as the short-packed one-per-case set in Series 48 of the Marvel Minimates line.

First up, my main interest in the set, Alicia Masters.  This is Alicia’s first venture into the world of action figures, though that’s not a huge surprise, given that she’s a fairly average looking person in a world full of super heroes.  Alicia is built on the typical Minimate body, with the standard height of about 2 ½ inches and 14 points of articulation.  She’s depicted here in a pink sweater and a slightly darker pink skirt.  I’m honestly not sure if this is based on a specific look for Alicia, but it seems to suit the character.  Alicia has a newly sculpted hair piece, and a reused skirt piece.  The hair looks fine, and sits well, and the skirt is a well worked piece of reuse.  The rest of the detailing is handled via paint.  The line work is all well-handled, with the edges and wrinkles of her clothes all handled with care.  I do wish the sleeve detail on her arm went all the way around, but it isn’t terrible.  I do like the unevenness of the bottom of the sweater, as it adds a nice touch of reality to her look.  The face looks appropriate for Alicia, and I like the way her eyes have been handled to denote her blindness.  Alicia includes a clear stand and a clay bust of her boyfriend.  The bust is really cool, and has a nice faint face detail.

Next is the Moloid.  The Moloid is the army builder of the series, and depicts one of the Mole Man’s faithful minions.  The moloid isn’t totally new to the action figure world, but he’s not the most frequently released character.  He’s also built on the usual body, only he’s got a specially sculpted head to show off the Moloid’s big, pointy ears, and a pair of “short” feet.  The short feet aren’t totally new, though this is the first time they’ve had the holes in the bottom to allow them to be plugged onto one of the stands.  The Moloid’s also got a sculpted loin-cloth, which is new to the figure, and accurately depicts the typical wear of the Moloids.  The Moloid has fairly basic detailing, done on a completely painted pale yellow body.  The Moloid’s only accessory is a clear display stand.

I enjoy this set a lot, more than I should, given the relative low-keyness of the character’s featured.  But things like Alicia’s awesome Thing sculpture are a great example of how Diamond can take a figure that could be boring and make it one of the stars of the series.  Both figures in the set are really cool additions to anyone’s Fantastic Four collection.