After doing a decently sized string of reviews from the line back in January, my Ultra-Act reviews certainly do seem to have slowed down a bit, haven’t they? The last one I did was Father of Ultra, and that was way back in February. One of the cool things about Ultraman is the plethora of different Ultras and all of their unique takes on the common design themes. Today, I’ll be taking a look at Ultraman Leo, the 7th main Ultraman, and star of Ultraman Leo. I know; what a shock.

Ultraman Leo is one of the very first of the 2014 releases for the Ultra-Act line. As per usual for this line, he’s not part of a series or the like, just a singlerelease on his own. This is Leo’s second release in this line, and this one has been made to fit in a bit better with some of the more recent releases. The figure is a little taller than some of the others, though not quite as tall as Father of Ultra, standing about 6 ¼ inches tall. He features the standard 40 points of articulation that most of this line’s figures sports. Leo has been bulked up a bitfrom his previous figure, in an aim to keep him more in line with the current line’s releases. The sculpt is pretty good overall, and re-creates Leo’s look in the show really well. The paint apps are applied cleanly, with no bleed over or slop. Bandai looks to be trying a new technique of detailing, through a sort of air-brushing. It’s a subtle touch, but it looks pretty good and gives the figure a bit more depth. As with all other Ultra-Act releases, Leo has

a large compliment of accessories, including: an extra color-timer, a pin-wheel (yeah, I don’t really know what that’s for), Ultra-Mant defense umbrella, 2 sets of nun-chucks (with and without real chain), a gold arm-band, a Leo-Kick effect, and 14 hands: fists (L and R), open gesture (L and R), open flat (Land R), karate-chop (L and R), nun-chuck gripping (L and R), umbrella grip (R), pin-wheel grip (R), Fire-Blast (R), and fire charging (works for either). That’s quite an impressive set of accessories. The color timer is standard, the pin-wheel and umbrella are definitely unique, the nun-chucks are great for letting you choose how to display them, and the hands add some real expression to the character. The piece for the Leo-kick is cool and all, but if you don’t have a stand, the best you can pull off is the “eek, my foot is on fire” look.

Leo was pre-ordered through Amazon. I guess it was relatively painless, though it did mark the first time they’ve sent me an e-mail effectively saying “we have no idea where this figure is, so we can’t guarantee we’ll get this to you… ever” for something I’ve ordered. As you can see, it worked out all right. I wasn’t quite as excited for Leo as I have been for others, but he’s a good figure over all. 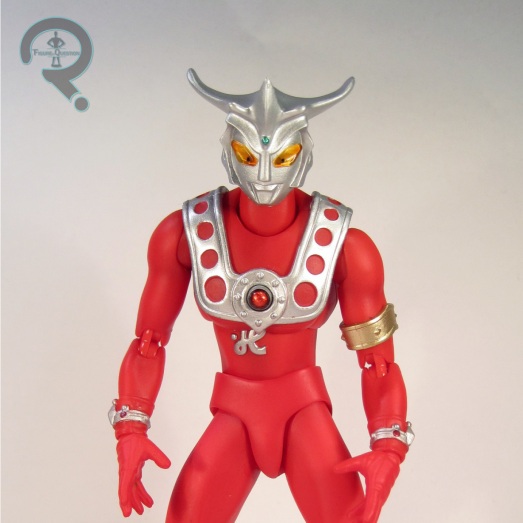