Even before I had seen the movie, I always thought the Crazy 88s from Quentin Tarantino’s Kill Bill as a pretty cool idea. When Diamond Select Toys announced the Kill Bill license would be coming to Minimates, I was immediately intrigued by the idea of getting some Crazy 88s Minimates. After seeing the movie, I was even more sold on the idea. So, without further ado, let’s see how Diamond’s take on these guys turned out!

The second set of Kill Bill Minimates continues the first set’s House of the Blue Leaves theme, but this time, instead of them main characters, it’s four members of the Crazy 88s. Just like the first set was significant for being made up of all female characters, this set is significant for being made up entirely of army builders, another rarity for Minimates.

While this is technically a set of all army builders, the first Crazy 88 in the set is actually based on a named character. The character in question in is Johnny Mo, the head of the Crazy 88s. Johnny is 2 ½ inches tall and features 14 points of articulation. The figure is depicted wearing the standard Crazy 88 uniform: black suit and tie and a Kato mask. It’s the only thing we see Johnny wearing, so it’s obviously a sensible choice. He’s built on the standard Minimate body, with the addition of a suit jacket and a tie, seen on numerous previous figures. The suit jacket has one small change; there’s a hole in the back near the bottom, which has been put there to allow Johnny to be placed on the leaping stand.  Johnny’s paint apps aren’t anything amazing, per say, but they are pretty good. The detailing on the face and mask are superb. They’ve chosen to give him a screaming expression. While it might have been nice to get a more reserved expression too, given the choice of only one, this is the one I’d go for. It works really well in an action pose, especially when coupled with the leaping stand. There’s one more painted detail on the figure that’s really easy to miss. On the back of the torso block, there’s a blood splatter. This means you can flip the torso around to depict the 88s from later in the fight. It’s a really cool touch that shows Diamond’s commitment to making these figures as fun as possible.

This is the first of the “generic” 88s in the set. He’s not based on any one in particular, although he does bear a resemblance to one of the 88s present during the “power walk” at the House of the Blue Leaves. Since he doesn’t have a name, and I don’t want to refer to him as #2 for the whole review, let’s just call him Topher. Just like Johnny, Topher stands 2 ½ inches tall and sports 14 points of articulation. He’s built on the standard Minimate body, with the addition of the suit jacket, the tie, and a hair piece. The hairpiece was first seen on the TRU exclusive Harada from The Wolverine and the jacket and tie are the same oft used pieces seen on Johnny. Unlike Johnny, Topher’s jacket hasn’t been altered to allow for the jumping stand. The paint work on Topher is nice and clean. He’s been given a slightly more reserved expression than Johnny, though he does still have a slight grimace, which means he’ll still be right at home in a fight scene. On the back of his torso, he features a blood splatter unique from the one seen on Johnny. This one is a bit more sparse, but still really cool!

Here’s Crazy 88 #3, whom I’ll now be calling Treat. Treat is another generic 88. He’s about 2 ½ inches tall and he has 14 points of articulation. He too is built on the standard Minimate body, as well as the suit and tie seen on the others and a hairpiece stolen from Thunderstrike, who was in Series 42 of Marvel Minimates. Like Topher, his jacket is unaltered, so no crazy jumps for him! The hairpiece is a somewhat unique one, so it brings some character to an otherwise basic figure. Treat’s facial expression is more intense that Topher’s, but not the full yell that’s been given to Johnny. He’s got more of a vicious snarl going, which definitely adds some diversity to the facial expressions on these guys. Like the others, Treat has a blood splatter on the flip side of his torso. His is much more severe looking than the other’s. Looks like Treat’s a goner!

Last up is Crazy 88 #4, henceforth known as Foreman. Foreman is the final generic Crazy 88 in the set. He stands 2 ½ inches tall and has 14 points of articulation. Just like everyone else in the set, he’s built on the standard Minimate body. In addition to the basic body, he’s also got the suit and tie pieces, as well as a poofy hairpiece, courtesy of Egon from the Ghostbusters line. Like Topher and Treat before him, Foreman’s jacket has been left unaltered, so he doesn’t get to do all the fun flips and jumps that Johnny does. He’s very sad about that. I’m not sure about the hair. It works for Egon, but it seems out of place here. Foreman has the most generic expression in the set. It’s just a basic gritted teeth look, which is actually really great to have in the set. He also ends up with the most basic blood splatter of the four. It’s pretty much just a straight streak of blood.

This set, by nature of being an army building set, doesn’t come accessories that really correspond to one figure in particular. There are two exceptions: the leaping stand and the bamboo swords are pretty clearly meant to go with Johnny Mo. However if you aren’t displaying as Johnny, that would change. Beyond that, there’s a clear display stand for each of the four figures, two extra heads, two motor cycle helmets, three extra hairpieces, two axes, and four katana. The stands are the same ones we’ve seen before, but I can’t stress how cool it is that we’re getting them with every release now. The heads allow more variety if you’re in the army building mood, offering a female head, which makes use of the same hair as Gogo, and a more calm male head, which has hair from the Peter Parker released in Series 46 of Marvel Minimates. The three hair pieces add even more to the variety of display options, and they are reused from DC Minimates’ Nightwing, Marvel Zombies’ Hulk, and Marvel Minimates Series 27’s Ultimate Captain America. The helmets allow you to recreate the fantastic chase scene, which was set to the always awesome “Flight of the Bumblebee” most commonly remembered as the theme to the 60s Green Hornet. The helmet was originally meant to be part of Marvel Minimates series 15, but as that’s the only series of Marvel Minimates ever to be cancelled, it never saw release. It’s nice to see it finally show up here! The axes and katana are both re-use as well, but it’s very sensible re-use, and it’s great to have several weapon options. If the figures weren’t already great enough, the accessory compliment really adds to the set’s cool factor!

I picked up this set, along with the other Kill Bill set, from my favorite Minimates retailer, Luke’s Toy Store. I was onboard for this set even before I saw the movie, but my excitement definitely increased once I had. Initially, I thought this set might be a little dull, what with it being four figures who are identical from the neck down, and not tremendously different from the neck up. Dull is the last word I would use to describe this set after getting it in hand. This set is a testament to how to build a successful collection of figures using almost no new pieces. The set has so many extra pieces, I’d even say it’s one of those rare sets that almost can’t be appreciated until you have more than one! 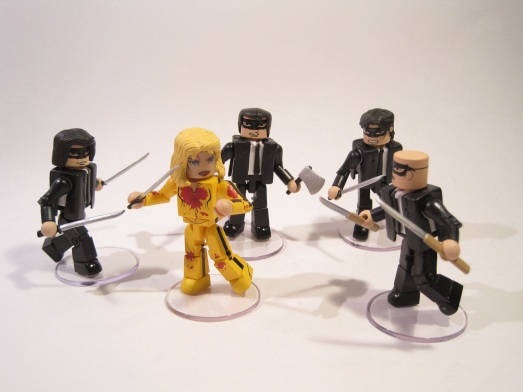