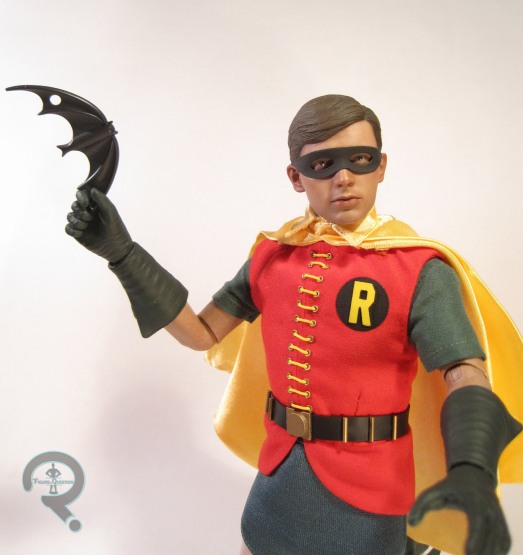 Alright, here we are with the second part of our little break into “Ethan reviews someone else’s toys.” Yesterday, I took a look at the Hot Toys version of Adam West’s take on Batman from the popular 60s TV series. It’s only fitting that I follow it up by taking a look at Batman’s partner in (fighting) crime, the only bird more dangerous than a sparrow with a machine gun, Robin the Boy Wonder!

Like Batman, Robin is part of Hot Toys’ Movie Masterpiece Series. He’s figure MMS 219, which places him directly after Batman in the numbering of the line. Robin is about 11 ½ inches tall, which makes him just a slight bit shorter than Batman, and (going by the Sideshow website) he has 30 points of articulation. He’s based on Burt Ward’s portrayal of the character in the 1960s TV show and Movie, though according to the solicitations, he’s specifically movie based.
One of HT’s claims to fame is their incredible likenesses. In all honesty, Robin isn’t one of their more spot on ones. While Batman was very clearly Adam West, the likeness is a bit more debatable on Robin. From certain angles, it definitely looks like Burt Ward, but from others it’s not quite as clear. However, the sculpted mask does a lot to fill in the blanks, so I don’t think anyone will be lost on who this is supposed to be. Overlooking the minute issues with the likeness, the sculpt features all the fantastic detailing we’ve come to expect from Hot Toys. In a similar fashion to Batman, the mask has been done as a separate piece, which gives the head sculpt the right amount of depth and layering. The paintwork on the head is nothing short of amazing. There’s absolutely no slop or bleed over, and the detailing is superb.  It looks like a real person. 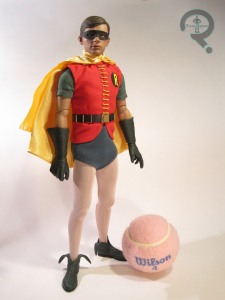 Robin’s costume is made up of nine parts in total. He has his signature shirt (with different colored sleeves), a cape, a pair of shorts, and a pair of flesh tone tights, as well as a sculpted belt, boots, and gloves.  Overall, everything is pretty well tailored, though there are a few minor issues. While Ward’s costume was a little off in the movie, the shirt and shorts overemphasize this. The shirt is too short, and the shorts are too long. However, with some futzing, this could be mostly fixed. The cape also seems just a bit too short, which is even more noticeable, given the thickness of the material. The sculpted pieces are all excellent, and they match up pretty much exactly with the pieces from the show. Robin’s body is a better fit for him than the body on Batman was for that figure. Perhaps it’s due to Ward having had a more basic body type, but it seems the standard slim TrueType worked out well.

Robin is armed with a nice assortment of accessories, though not quite as many as Batman (in all fairness, Robin retailed for $15 less.) He features:

The figure’s hands include the following poses: a pair of fists, a pair for gripping, a pair with a two finger gesture, one looser grip, and one for receiving a fist (to replicate one of Ward’s signature poses.) Unlike Batman, these hands are more meant for posing than for accessories. Each of the hands is well sculpted, and they all swap out pretty easily.

At first, it seems like the Batarang is a piece of re-use, however closer examination shows that it’s actually a different, smaller Batarang than the one included with Batman. It’s well sculpted, and has the same hole for the Bat Rope that the other Batarang has.

The Bat-Cuffs represent another fairly standard Bat-accessory. It’s nice to see that HT thought to give Robin something not included with Batman. The cuffs are nicely done; they open and close like real cuffs, and even have a metal chain between them.

The Bat-Radio and Rope are the same as the ones included with Batman. The Bat-Radio is still a cool little piece and the Rope is still just a piece of string.

Finally, Robin includes a standard display stand. It’s been decorated with his name and the Batman ’66 logo.

So, this is another figure belonging to my friend Lance, which he’s very kindly allowing me to review. Overall, the figure has its issues, but it’s pretty good. At first, I was a little let down by Robin, especially after the really fantastic Batman. However, placing the two figures side by side, every problem fades away. These two really make for a killer display. For once, I’m rather envious of someone else’s action figure collection.